"It should encourage discussion about cultural hurdles"

The children’s story is a wonderful and innovative tale that surrounds itself around a South Asian female, pursuing her love of netball.

The book is based on Ziana, who is the first British Asian of Pakistani heritage to represent England in netball.

This historic feat, as well as her charitable work, meant Ziana was a highly regarded finalist at the 2020 Asian Women of Achievement Awards.

So, it comes as no surprise that this empowering journey was partly recreated for South Asian children to enjoy.

Exposing more kids to South Asian names and culture is unfamiliar, yet a territory worth sharing. This is one of the main ambitions that Ziana notes.

She and Niala both want to highlight the contrasting cultures within society. They also wish to take a proactive approach in guiding more girls towards sports.

This is not just a book for enjoyment, but also tool to educate and inform young children that they should always follow their dreams.

What was the motivation behind creating ‘Aisha’s Netball’? 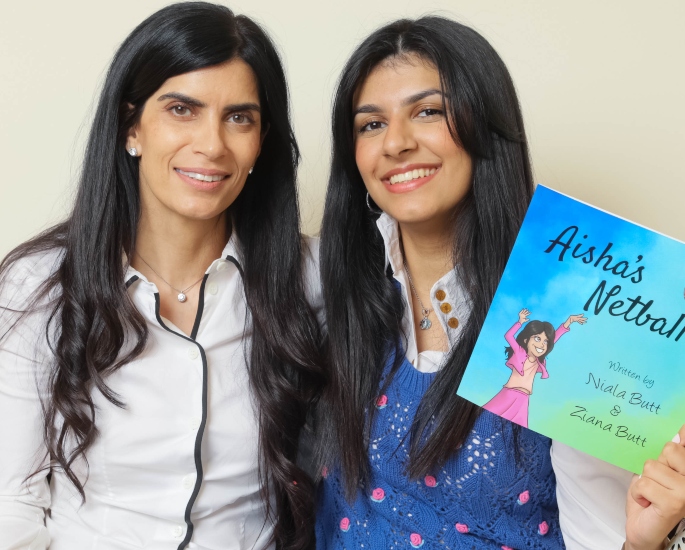 There is a belief or perception that South Asians are more academically minded and pursue professions such as a doctor, lawyer, accountant etc. as opposed to sport.

We believe this unfairly disadvantages South Asians who are serious about sport.

It is also hard to see other athletes being given opportunities that are not afforded to South Asian children, knocking their confidence and self-esteem.

It is important for Ziana to be a visible role model and let other children know they are not alone if they go through these emotions, and you need to just keep pushing through.

Ziana has been volunteering, running community training sessions, making inspirational videos for social media, whilst taking all opportunities to instil inclusion for many years.

“Ziana also visits schools, as we believe children are influenced by what they see, hear and read growing up.”

One of the things Ziana felt after her visits, was that in general, most children had not considered sport beyond school PE lessons or as a profession.

The book is the next step in Ziana’s journey to encourage more South Asian children to think about sport.

Whether it is at club, elite or professional level by planting the seed of sport very early on.

What type of impact do you want the book to have?

We want the book to add an element of diversity to the books children read by shaking up the standard bookshelf.

We have all read books like Peter and Jane, or Topsy and Tim, but all children need to see a variety of books.

Also, we want the book, which is for all children irrespective of heritage, to introduce a taste of South Asian culture.

“It should encourage discussion about cultural hurdles and barriers society has created. Most importantly, introduce inclusion at a young age.”

What has been the reaction to the book? 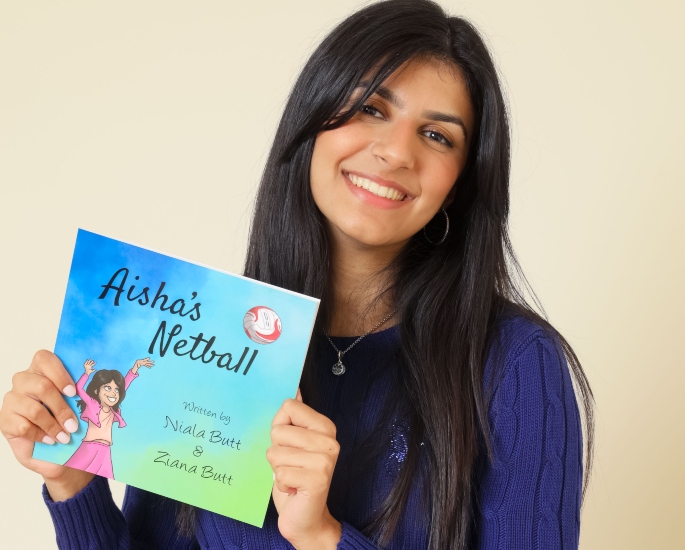 The reaction to the book has exceeded expectations.

Receiving in excess of 46,000 impressions on Twitter alone and interest from various corners of the UK, US and Australia.

“This suggests there is a real recognition that books like Aisha’s Netball are not only needed, but warmly welcomed.”

Ziana, who the book is based on, has been asked to record podcasts about the book, offered book reviews overseas to mention a few.

There seems to be a lot of activity at the grassroots level. You only need to go to a school, park or club and you will see lots of South Asian girls playing sport.

Much more is needed at elite and professional levels across all sports. Particularly team sports, to help South Asian girls progress in the same way.

It would certainly help if there were more South Asian coaches and sportswomen as role models.

Children aspire to be like those they see, feel a connection with and look up to and say: ‘I want to be like her when I grow up.’

When Ziana goes on court, she is not just representing herself but her community.

Why did you choose a children’s story instead of other means of literature? 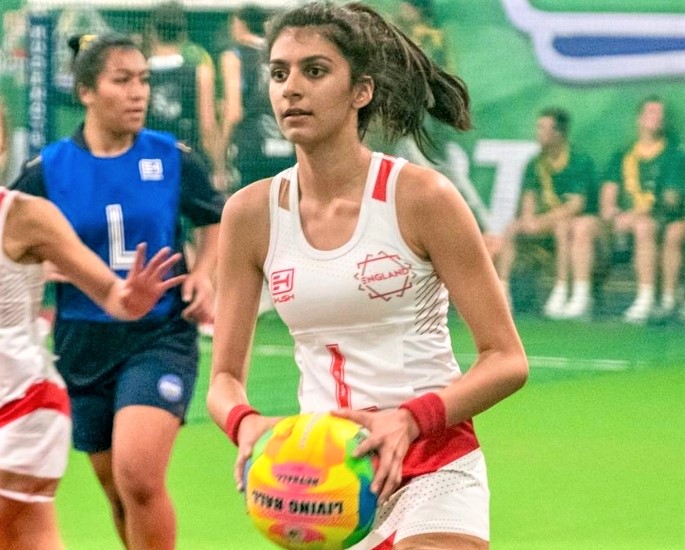 To make a change, we need to see much greater numbers of South Asian children pursuing sport.

So they don’t feel different or singled out as they move to a higher level.

“To play at an elite or professional level, children are entering their chosen sport much earlier on now.”

The book is not only about planting the seed of sport but encouraging discussion around diversity and inclusivity from a young age between parents and their children.

Were there any difficulties in getting the book published?

We made a conscious decision to self-publish after doing quite a lot of research.

We wanted to retain control of the content, illustrations and express the lived experience.

The tough part was finding an illustrator who could see our vision and bring it to life the way we wanted.

Glen worked very hard on the detail and diversity reflected through the book’s characters while maintaining the connection with reality.

What needs to change to see more South Asian representation in books? 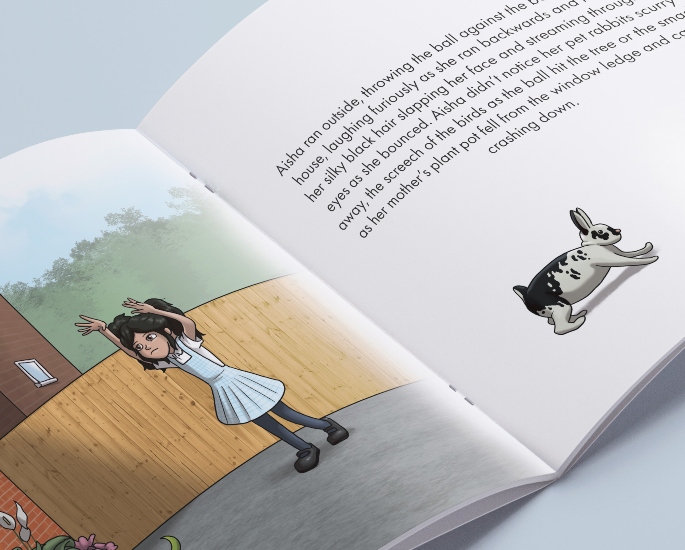 As with any area, there must be a desire to want change.

In a discussion on our local neighbourhood chat, the only children’s book a neighbour of white heritage could think of with South Asian characters was The Jungle Book.

“This demonstrates just how desperately we need a change in the choice on the bookshelf.”

A young boy brought up by Wolves. Whilst a fun story, it is not sadly going to motivate, inspire or encourage inclusivity.

Publishers and bookshops should demand more variety, making authors step outside of their safe place.

You only need to Google ‘South Asian children’s books’ to find yourself faced with references to chapati, roti and paneer in the titles. I am sure these are great books.

We believe we need to educate by introducing South Asian culture in such a way that it is welcoming, exciting and encourages thought and discussion, whilst being a great book for any child.

Aisha’s Netball does just that, in addition to bringing women and sport to the forefront.

Do you have any future plans to make more Asian inspired stories? 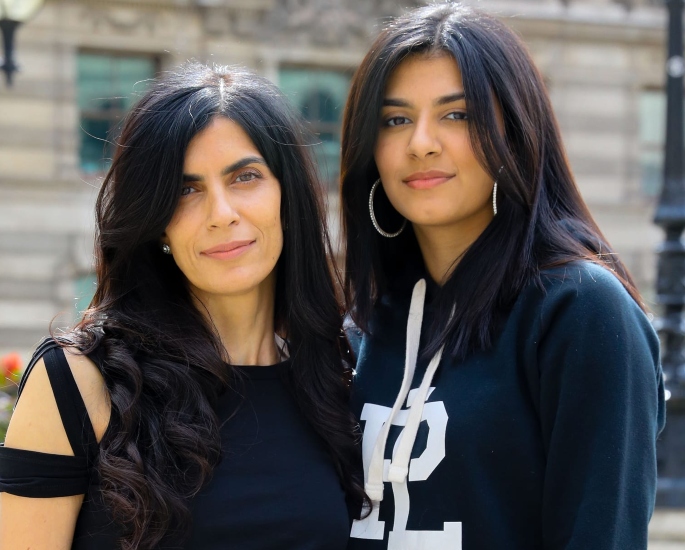 We are so proud of the book; it was a lot of hard work, and we would love to follow Aisha’s journey at the club.

Right now, we are focussing on the positive response to the book.

We are delighted Ziana has been contacted by local schools to come and speak to the children about her journey leading to the book, which is just fantastic.

We would just say watch this space; it is very early days.

The vibrant, captivating and original story of Aisha’s Netball delivers a fresh and unique ambience that will surely uplift many children.

The book is extremely exhilarating but does not completely mask the conflicting emotions that South Asian girls can sometimes feel.

Therefore, it is a superb read, which entertains children, as well as providing that extra push for them to feel inspired.

The snazzy language and immersive illustrations do well in creating a warm and engaging experience for both parents and their children.

In addition, the imaginative plot succeeds in representing an underrepresented South Asian community. Indeed, this could be the catalyst for change for the future of British children stories.

You can check out Aisha’s Netball here.