"I can showcase the best of India's traditional heritage."

The annual Mijwan Fashion Show took place on the 1st of April, 2014, at the Grand Hyatt in Mumbai. The fund-raising event was organised by Bollywood actress Shabana Azmi.

She is the head of Mijwan Welfare Society (MWS), a non-government organisation that aims to introduce girls from the small village of Mijwan to a world of equal gender rights and opportunities.

The MWS was founded in 1993 by poet Kaifi Azmi, who originated from Mijwan. The organisation aimed to promote female empowerment in a rural Indian town, where girls used to be forced to marry as early as the age of twelve. 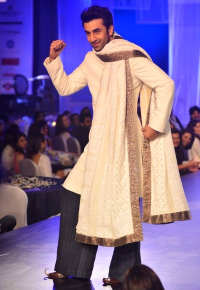 Gradually, Azmi managed to set up a high school and Inter college for girls, a computer training and a sewing and tailoring centre.

After he passed away, his daughter, actress Shabana Azmi, has taken his legacy along with her godchild Namrata Goyal. Every year the most prominent Indian designers and favourite Bollywood celebrities participate in the glamorous fashion show Azmi organises.

The event signifies the great efforts Mijwan and India have gone through towards reaching cultural integrity and gender equality.

This year it showcased a charity fashion show presented by fashion maestro Manish Malhorta. The theme of the collection was ‘Men for Mijwan’.

The show featured traditional female and male wedding attire with a modern twist. It was coloured in primary and pastel palette, adorned with golden chikankari. The ensembles were complemented with simple laid-back hair, brown smoky eye and fine jewellery. 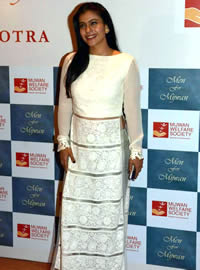 The designer commented on his work with the MWS: “When I give work to the girls in Mijwan, it is a win-win situation for both. I give them employment and they give me their craft, which is outstanding by all measures, and I can showcase the best of India’s traditional heritage.”

The collaboration between Malhorta and Mijwan girls is acknowledged worldwide. One of their recent celebrity fans is 90s super model Naomi Campbell, who looked angelic in one of their masterpieces.

A constellation of Bollywood celebrities, including Ranbir, Farhan Akhtar, Sidharth Malhotra and Akshay Kumar, walked the ramp in response to Azmi’s benevolent activity.

Akshay Kumar is an Indian star known for promoting female empowerment. At the Femina Women Awards he awarded 1,00,000 INR to Sarupa Sangam.

The girl has undergone great lengths from working as a full-time maid to becoming a silver medalist in the Akshay Kumar International Karate Tournament. She triumphantly won the prize in the ‘Upcoming Students Category’. 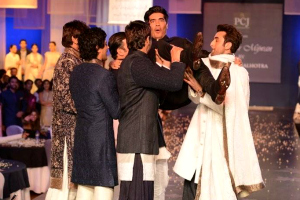 Akshay Kumar walked the ramp, dressed in a blue bandhgala, combined with a white kurta pajama in a look that blended Eastern and Western influence. The actor amused the audience with his recent makeover – a handlebar mustache.

The pinnacle of the show was Amitabh Bachchan, who looked dashing in a black bandhgala chikankari achkan, matched with white Pathani salwar.

The Bollywood veteran later posted on his blog: “A large number of colleagues and a large number of very beautiful ladies that walk the walk for designer Manish Malhotra. A satisfying experience and credit of immense value.”

In the grand finale of the show, all of the ‘models’ gathered and picked up the designer Manish Malhorta for the audience’s utmost delight.

Many Bollywood stars and A-list names attended the event to support the cause. Kajol resembled an angel in a Malhorta’s white creation. Aditi Rao Hydari looked impeccable in an elegant white anarkali. Sonali Bendre was dressed in a cream blouse teamed with a white and pink saree, designed by Manish Malhorta. 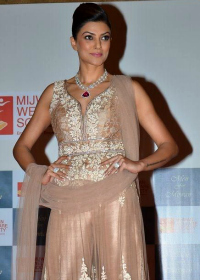 Sushmita Sen was stunning in a nude show-stopper dress, embellished with white embroidery. Vidya Malvade shew off her figure with a bright pink lehenga.

Kalki Koechlin’s outfit was flawless; she was dressed in a simple white gown, teamed with gold accessories. Parineeti Chopra’s choice was a salmon and grey suit by Manish Malhorta.

The head of the MWS, Shabana Azmi described the evening by saying:

“It is very heartening that my colleagues in the film industry whom we approached, were all aware of Mijwan and warmed up to the idea and I am truly indebted to them for their support.”

The event manifested the great lengths India has taken from a land where a girls only career perspective was marriage, to a place, where the idea of gender equality is spread throughout the whole country.

Dilyana is an aspiring journalist from Bulgaria, who's passionate about fashion, literature, art and travelling. She is quirky and imaginative. Her motto is 'Always do what you are afraid to do.' (Ralph Waldo Emerson)
Spring/Summer 2014 Trends for Men
Top 5 Pakistani Fashion Models