The paintings of Manu Singh could easily win the hearts of all viewers as she has raw talent in the area of art and creativity.

“You don’t need a formal training or vast knowledge about it. It comes from inside.”

Despite being a History student, Manu Singh realised her true calling in painting and followed her heart to become one of the most notable artists in India.

Manu Singh is an artist by profession and what makes her paintings unique is her ability to bring life to the images she creates. Every work of art she portrays really reflects her style of distinctiveness.

What sets her paintings apart from others is her experimental endeavours she adopts in her working style. She says that she experiments with conté, oil and other elements as mediums to bring the desired effects to her paintings.

From History to Art

Born in Lucknow, Manu Singh completed an MA and PhD in Medieval Modern Indian History from the University of Lucknow. Simultaneously, she studied art and trained at Triveni Kala Sangamam in New Delhi.

Beginning her career as an artist, she participated in group exhibitions in 2009 and 2010 at All India Fine Arts and Crafts Society (AIFACS) in New Delhi and Contemporary Art Fair in Geneva, Switzerland. 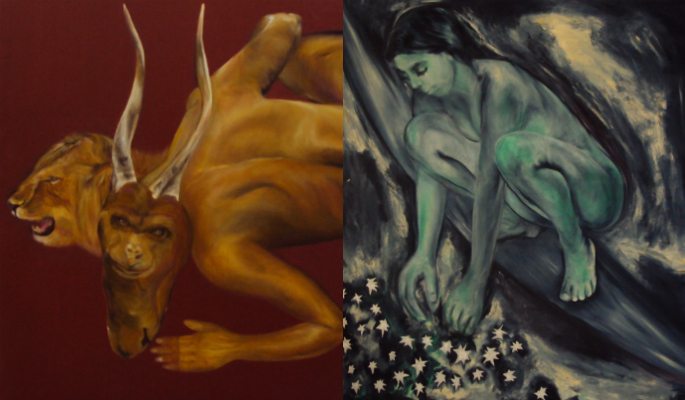 In both years respectively, Manu Singh received awards for participating in AIFACS, where she showcased her work. Unstoppable with her art, after 2011 she carried forward her artistic spirit to take the art of painting to a whole new level.

She held her first solo show ‘A Meaning-Making Capacity’ in 2011 and since then, she’s never looked back. ‘Disciple’, ‘In Search Of Utopia’, ‘God Created The Mother’ and ‘Labyrinth’ are some of the notable works of Manu Singh. They have all received wide applause from the public for her creativity in paintings.

Inspired by her childhood toy, Manu Singh’s recent work in 2016 is titled ‘A Wooden Horse’. A toy which she used to travel to imaginary places with:

“Wooden Horse has all kinds of powers, it can fly, it can swim, it can do anything,” she says.

Manu Singh proved the point exactly that pictures speak more than words. They have the quality to emphasise the feelings in the character very clearly.

Every piece of art from her has an invigorated message to all the public. It remains a long lasting visual delight to all the viewers.

Look at her paintings; they are not drawn out of artist’s illustration. They are born from the arena of fervour for paintings.

In an interview, when asked about her passion for paintings, she answered: “You don’t need a formal training or vast knowledge about it. It comes from inside.”

Every piece of art created by her has an invigorated message to all the public. They remain a long lasting visual delight to all viewers. She is so passionate about her profession that every image she drafts is a feast for the eyes.

Paintings are an enduring part of tradition all over the world; especially Indian paintings have registered their mark and set the bar high in the history of world paintings.

Manu Singh continues to excel in her career and produce outstanding art. Her paintings will definitely demand a space in the history of international paintings.