Mohammed Shaifaq has been jailed for his part in a row inside an ice cream parlour in Batley, West Yorkshire. The row was over Shaifaq’s married sister.

"He began shouting, demanding that the manager came to see him."

Mohammed Shaifaq, aged 27, was jailed for four weeks at Kirklees Magistrates’ Court for a row inside an ice cream parlour about his married sister.

The argument resulted in an employee being assaulted.

Abuse was hurled in front of staff and customers at Icestone Gelato in Batley, West Yorkshire. Ice cream cones were also shoved over.

Shaifaq is currently serving a jail term for another violent offence and was sentenced in his absence after refusing to board the bus from his prison to the court.

At a previous hearing, prosecutor Ben Crosland explained that Shaifaq was not happy with one of the employees contacting his married sister.

He and Shaid Warsi, aged 31, entered the building “to look for trouble”.

Mr Crosland said: “The defendant walked straight up to the counter where there was a stack of ice cream cones and elbowed them onto the floor.

“He began shouting, demanding that the manager came to see him.”

The men were shouting and swearing “in both English and Punjabi”.

Warsi wanted to see the manager but was unhappy with the response from the staff member. Both men walked behind the counter and Warsi spat at a member of staff.

Mr Crosland said: “The spittle did not make contact with him but it was unpleasant.”

A female witness sitting in a booth saw the incident and described it as “disgusting”. 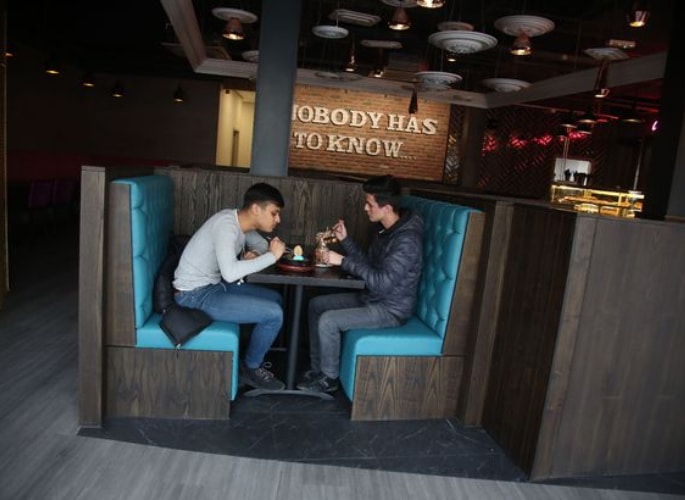 Shaifaq then struck a worker to the face, causing him to fall where he was then kicked. He did not wish to make a formal complaint but the witness saw it, reported the ExaminerLive.

It was unclear who, but Shaifaq or Warsi then said: “I’ll burn this place to the ground.”

The witness called the police and both men were arrested.

Warsi initially denied the charges but changed his plea to guilty on the day of his trial.

“There was an incident between the other gentleman and his sister who is married and that gentleman was the most aggressive of the two.

“Mr Warsi became involved, ridiculously, and he shouldn’t have done.

“It was not his problem to start off with and he shouldn’t have become involved.”

Shaifaq appeared at Leeds Crown Court in December 2018 and was jailed for 18 months due to an unconnected serious assault.

“I’ll ask you to give him some credit for his change of plea to guilty as it has saved a trial.

“I’d simply ask that you sentence him so as not to impinge on his current sentence.”

Shaid Warsi, of Batley, was sentenced to a 12-month community order with 120 hours of unpaid work.

Mohammed Shaifaq, of Batley, was jailed for four weeks which will run concurrently with his existing sentence. He will also have to pay a £115 victim surcharge upon his release.

Dhiren is a journalism graduate with a passion for gaming, watching films and sports. He also enjoys cooking from time to time. His motto is to “Live life one day at a time.”
Indian Woman has forced Abortion after In-Laws Betrayed Her
Indian Wife Tortured and left on Railway Tracks to Die for Dowry