A bizarre video showing a Pakistani man turning a McDonald’s Chicken Burger into ice cream has gone viral on Twitter.

"This is a terrorist attack on food."

A video of a Pakistani man making ice cream out of a McDonald’s Chicken Burger has gone viral and has led to a mixed reception.

The unusual dessert was reportedly made at Chaudhary Ice Cream Parlour in Lahore, Pakistan.

The weird two-minute video was shared on Twitter by Darshan Pathak. It went viral shortly after.

The idea of eating a Chicken Burger ice cream is not appetising at all, and netizens seem to agree.

In the video, the Pakistani man takes out a McDonald’s Chicken Burger from its box and places it on a tawa.

He proceeds to mash the whole bun into a pulp.

After that, he adds milk and cream to it and mixes it well using the roll-up ice cream method. Once ready, the mix is served in cups.

Netizens, triggered by the video, started to share hilarious comments and pics.

One user wrote: “He could’ve just put it in a mixer grinder instead of mashing it up 1000 times and saved energy and time.”

Another said: “This is a terrorist attack on food.”

A third posted: “True this is what happens inside the stomach when you eat burger followed by ice cream, and he just mixed it together that’s all.”

He could've just put it in a mixer grinder instead of mashing it up 1000 times & saved energy and time.???

There have been a number of bizarre food trends before, and vada pav ice cream is one of them.

Vada pav is a vegetarian fast food dish from Maharashtra, consisting of a bread bun sliced almost in half through the middle with a deep-fried potato dumpling placed inside.

The video was shared on Twitter by Desi Gooner, aka Sahil_Adhikaari, with the caption: 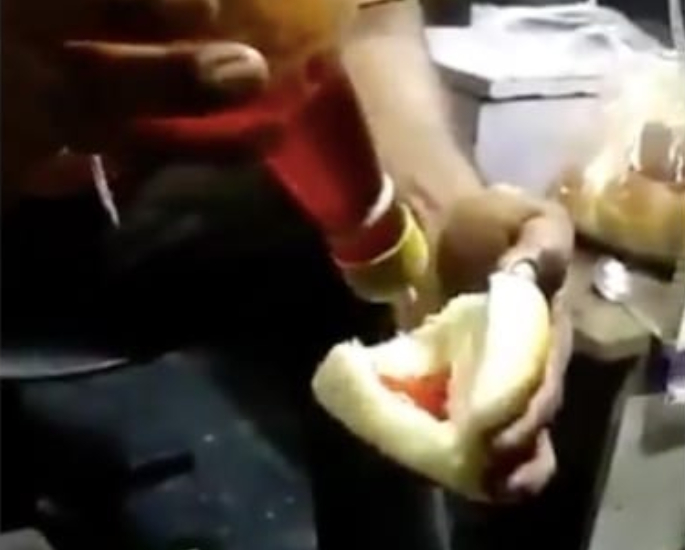 The viral video showed a food stall owner in Gujarat stuffing the vada pav with a scoop of ice cream and pouring multiple syrups inside.

The man then garnished it with tutti-frutti before serving it to the customer.

While many netizens loved the recipe, others seemed to be really disappointed.

This unusual fusion was created to mark World Nutella Day and was available until February 7, 2021.

The History of Indian Restaurants in the UK
The Most Expensive Biryani in the World?