The Most Expensive Biryani in the World?

An extravagant biryani is available to order in Dubai and is said to be the world’s most expensive. What makes this dish so pricey?

it reportedly takes 45 minutes to cook and assemble.

A biryani in Dubai has hit the headlines because it is said to be the most expensive biryani in the world.

Biryani is typically seen as a luxury dish within Indian cuisine but this Dubai restaurant takes it to the next level.

As it is said to be the world’s most expensive, it comes with a hefty price tag.

This dish costs Dh 1,000 (£190) and that is because it comes on a giant platter, served by two waiters wearing golden aprons.

The dish weighs three kilograms and it reportedly takes 45 minutes to cook and assemble.

Served on a golden metallic plate, this biryani comes with three varieties of rice, promising a culinary adventure across India.

It has white and saffron-infused rice, keema rice and chicken biryani rice.

The dish also comes with an assortment of meats, including lamb chops, lamb seekh kebabs, meatballs and grilled chicken.

The seekh kebabs are sure to grab your attention as they measure the length of the serving plate.

Various curries such as Nihari salan and Jodhpuri salan are added to the dish.

It is garnished with mint leaves, roasted cashew nuts, pomegranates and served with an almond and pomegranate raita.

To add even more opulence, the entire dish is topped with 23-carat edible gold. 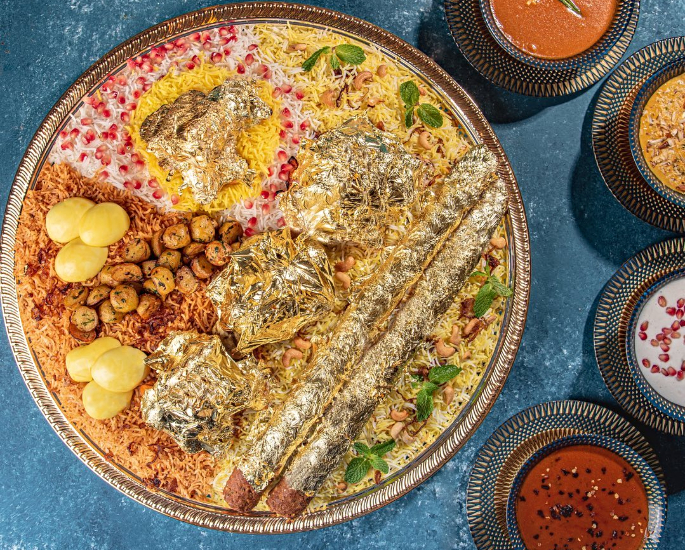 He said that the dish has a mixed grill, accompanied by four sauces.

“On top of that, we put more than 20 pieces of real gold leaf for a truly luxurious finish.”

He added that the dish is enough to feed between four and six people.

In a statement, Bombay Borough said:

“It is the exuberant journey to experience royalty.

“This royal meal is served in a Thaal and the Gold Biryani is garnished with 23 carat edible gold.”

While it is an expensive dish, those who do order it will enjoy a unique experience as the varieties of rice and meats are authentic regional flavours in India.

The luxury dish was created in celebration of the restaurant’s first anniversary and while it is not known whether it is officially the world’s most expensive biryani, it is a dining experience unlike any other.

Dhiren is a journalism graduate with a passion for gaming, watching films and sports. He also enjoys cooking from time to time. His motto is to “Live life one day at a time.”
Pakistani Man makes McDonald’s Chicken Burger Ice Cream
Zomato worth $5.4 billion after $250m Investment