The 10th London Indian Film Festival returned with the much-awaited ‘Article 15’ for the opening night. DESIblitz attended LIFF 2019 and reviewed the film.

“The film takes the side of equality and togetherness."

Marking the 10th anniversary, the opening night of the London Indian Film Festival (LIFF) took place in the capital city on June 20, 2019. LIFF 2019 began with the world premiere of Anubhav Sinha’s Article 15.

The investigative drama stars ‘Bollywood’s man of the moment,’ Ayushmann Khurrana in a leading role.

Gracing the red carpet of Picturehouse Central in Piccadilly Circus were many big names from the world of film, fashion and entertainment.

LIFF which is running until June 29 2019, will showcase a diverse array of independent South Asian films.

Besides London, the festival spans across other cities of the UK, including London, Birmingham, Manchester, Stockport and Halifax.

We highlight all the glitz and glamour on the red carpet and review the wonderful film, Article 15. 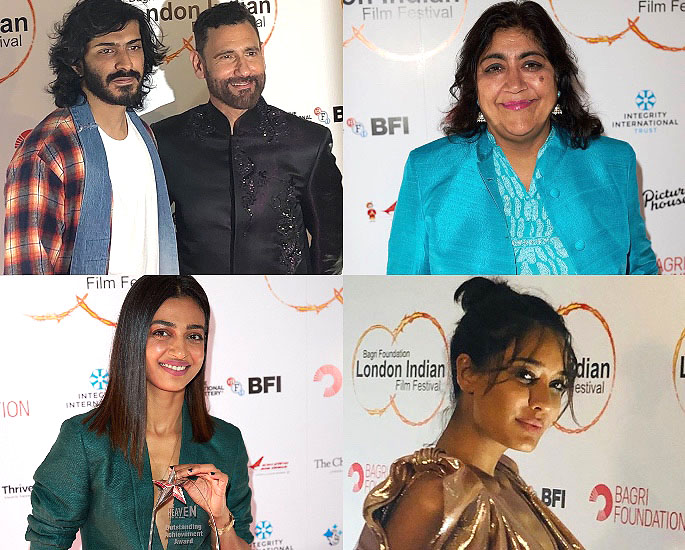 It was all smiles for the guests and the London Indian Film Festival (LIFF) team who have put in a lot of time behind the scenes for the 10th edition.

LIFF Executive and Programming Director, Cary Rajinder Sawhney told us that audiences can look forward to an exciting line up for the 10th anniversary:

“We have Guru Das Gupta, legendary Bengali filmmaker, coming all the way from Calcutta to be with us. We have a screen talk by Radhika Apte where she will talk about her new film.

“Chai with Chadha, a talk with Gurinder Chadha, has been nearly sold out at Picturehouse central. Anurag Kashyap, who has directed the likes of Gangs of Wasseypur, also doing a screen talk.”

“We also have a number of industry events. This is for those budding filmmakers who are trying to enter into the competitive film industry.”

Cary was pleased by the fantastic opening night turnout for the Article 15 screening:

“It seems to be creating a stir with audiences wanting to see it. The film has also been a little controversial which is good.

“We hope that LIFF will be a great platform for its release later on.”

After receiving an outstanding achievement award at LIFF, actress Radhika Apte who wore a smart stylish attire was happy to be present and was excited about her screen talk:

“My association with LIFF has been really lovely. I was not here when Parched was screened. However, I am excited to be here now.

“The discussion we’re doing on Sunday is one that I’m looking forward to. It will be great to talk about the journey and interacting with the audience.”

In reply to a question about her increasing body of work on Netflix, Apte added:

Actor Harshvardhan Kapoor who got the Rising Star Award spoke about his film choices on the red carpet:

“I made films that may not be for everyone, but for people that do connect with it. I want to continue doing films like Bhavesh Joshi and the Abhinav Bindra biopic.

“I’m not looking for instant gratification – I want to do films that I want to see.”

The Abhinav Bindra biopic will be his next, sharing screen space with father, Anil Kapoor. Harshvardan elaborated on this saying:

“It has taken us a very long time to write a script that we all like. It’s not a typical rags to riches story.

“He grew up a wealthy guy and shooting is a different sport. It’s not like cricket or running either which is very external and relatable.

“We’re trying to make a film that is unique yet still cinematic and entertaining. When we feel good about it, we’ll shoot it.”

Reflecting on her event and interacting with the audience, director Gurinder Chadha went back into memory lane as she recalled:

“I’m looking forward to going back and seeing some clips from films. Some of which are 15-20 years later.

Australian actress and model Lisa Haydon who moved to London, stunned in a golden dress. She could not hold back her excitement for being at LIFF, stating:

“I get very excited whenever I see the Indian film industry coming to London since I’ve moved here.”

Interestingly, Haydon also shared how she had previously worked with Ayushmann prior to their Bollywood careers:

“Before he made his debut into films, he was an MTV VJ. Together, we hosted a programme called Rock On.”

Anubhav Sinha the special guest for the night also graced the red carpet. 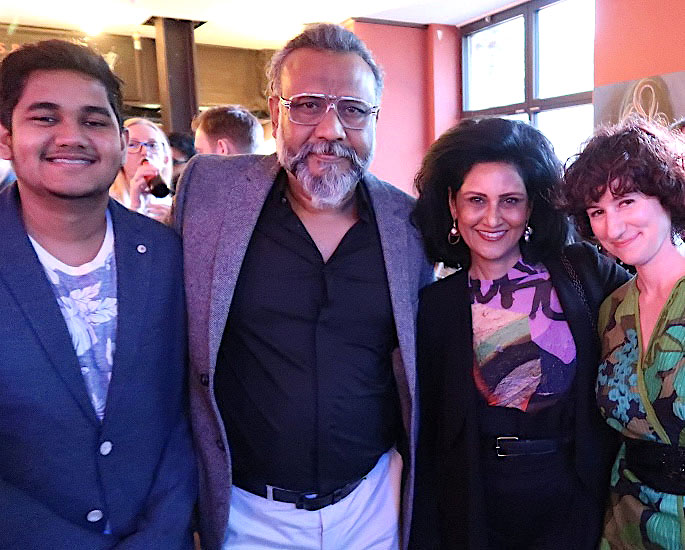 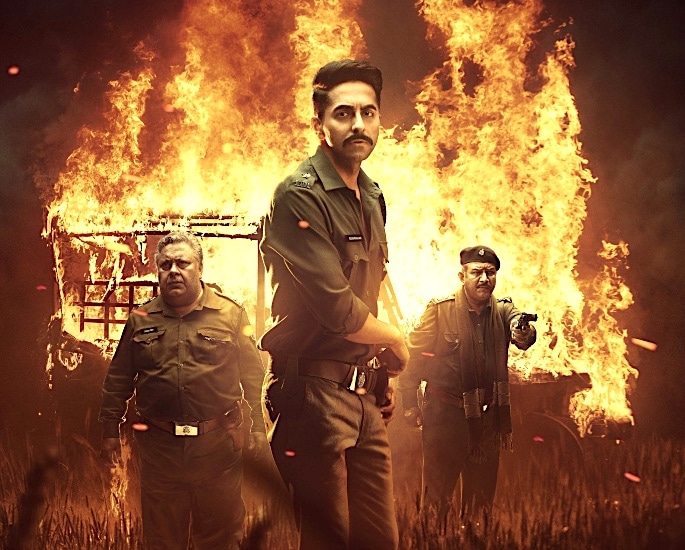 Following the red carpet, guests went to see the thrilling Article 15, a direction of Anubhav Sinha.

Article 15 is an investigative drama about the police case of missing Dalit girls who become victims of rape.

Actor Ayushmann Khurrana who plays police officer Ayan Ranjan has the task of unravelling the mystery surrounding the missing girls.

The film sheds light into the Prohibition of Discrimination in the Indian Constitution with connection to faith, gender, caste or place of birth.

After delivering stellar performances in previous films, Ayushman does not disappoint yet again.

In fact, Article 15 counts as one of his best performances to date. He plays the role with integrity.

It is also refreshing to see a non-clichéd depiction of an Indian police officer.

The cast was incredible and supported each scene well.

Manoj Pahwa, who we often see in comic roles, is brilliant in his negative role. Sayani Gupta shows ounces of emotion and expression in every frame.

Mohammed Zeeshan Ayyub, whilst in a special appearance, leaves a lot of impact in a short space of time.

Dialogues in the film were expressive and conveyed key messages timed well with the screenplay.

The cinematography goes well with the mood and messages expressed.

Sinha sensibly avoids using the soundtrack as a stand-alone through the film. This way the audience remains gripped to the suspense.

The background score helps to enhance the eeriness in certain scenes of the film.

At the screening, Sinha described the film “more relevant than ever.” And after seeing the film, the audience could not agree more. He said:

“Discrimination has been bothering me for decades but in the last 5 years, a lot of incidents have been reported. Especially about Dalit girls getting raped and killed.

“The more I read into it, the more I realised that so much more happens than what is reported.

“In fact 15 days ago, in a Mumbai medical college, a medical student committed suicide due to discrimination. Such incidents are happening on a daily basis across India.

“However, strangely it’s become part of our DNA and we don’t even question it ourselves. It’s about time we spoke about it and we fight it.”

He also gave his point of view in relation to the controversies that have been circulating around the film:

“The film takes the side of equality and togetherness.

“There is no discrimination made against any caste or background.”

“The message of the film is that, people should not be classified between the family they are born in but in fact, should be about whether they are good or bad.”

At the end of the film, Sinha had a brief Q&A session with a ‘Time Out’ presenter. 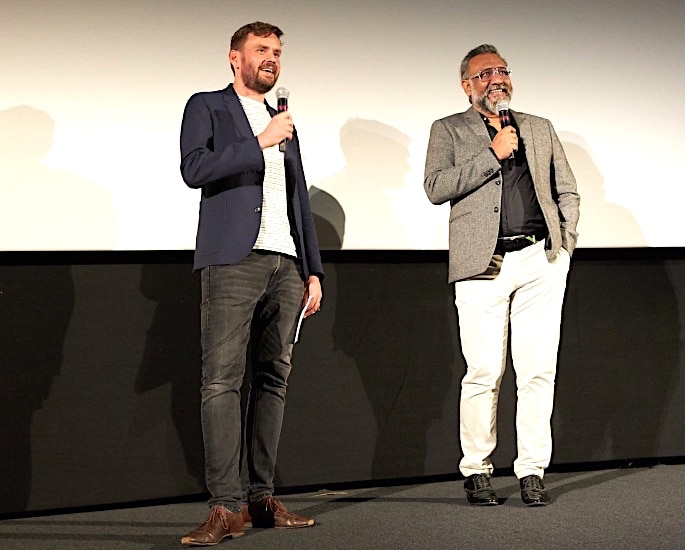 Prior to the screening, British singer Amrit Kaur sang her own composition. This was an adaptation from a famous poem by Amrita Pritam for the women of Punjab in 1947. She commented:

“The poem takes us back in history and shows how universal the messages are, including to the film.”

Majority of audience members left very impressed with the film Article 15 and were full of praise. Hopefully, the team can expect a similar response when released to the public shortly.

Article 15 will release in the UK and worldwide on June 28, 2019. With more than twenty films screening and a diverse schedule of events, LIFF 2019 has much to offer.

The stellar opening film and star-studded red carpet, has got the 10th edition of LIFF to a flying start. People will remember Article 15 for its thought-provoking messages and performances to match.

The full programme for LIFF 2019 can be found here. For further information about LIFF 2019 and to purchase tickets please check here.