Karan Johar’s ‘Takht’ not going to be Made?

Karan Johar’s multi-starrer historic film Takht has become the next victim of the Coronavirus outbreak. Let’s find out more.

“It’s a big film in terms of scale and the cast."

Filmmaker Karan Johar’s highly ambitious historical drama film, Takht (2021) is facing the wrath of the Coronavirus pandemic which has caused the production of the film to be cancelled.

The film revolves around the succession of the Mughal emperor Aurangzeb after Shah Jahan.

Karan Johar had roped in some of Bollywood’s biggest names for the film, Takht (2021).

The stellar cast list featured the finest actors and actresses in Bollywood and Karan Johar had scheduled the film to hit the big screen sooner as opposed to later.

According to a report in Pinkvilla, Vicky Kaushal had shared his excitement for shooting for the film. He said:

“Every character has its own demands and I’ll get into the headspace of my character in Takht (2021) only once I start shooting for it. It is a completely different world.

“I used to be starstruck during readings as I would sit with the director and writer to understand the world they had created and how they are looking at it.

“It’s their vision and we’re the mediums to make it reach the audience.”

Vicky continued to mention how the magnitude of Takht (2021) required time to get the cast and location right. He said:

“It’s a big film in terms of scale and the cast. Getting everybody together and getting locations right took some time.

“We wanted to take some time so that we could start in the best way possible. Now, everything is locked and I can’t wait for the process to start.”

Unfortunately, as a result of COVID-19 shooting for Takht (2021) will not go ahead.

However, it seems the film was facing hurdles before the outbreak of the Coronavirus.

Despite these setbacks, Karan was looking to go ahead with the film.

Although, now it seems Takht (2021) is a ‘no-can-do’ project for all those concerned with the film.

Also, it appears Takht (2021) is not the only film to be affected. Dharma Productions closed its office temporarily due to safety concerns.

Originally, Takht was scheduled to hit the big screen on December 24, 2021.

The production house will have to rethink other upcoming films like Dostana 2 (2020) and Deepika Padukone’s, Siddhant Chaturvedi’s and Ananya Panday’s currently untitled film.

The Coronavirus pandemic has bought the entertainment world to a standstill. We wait to find out the fate of the other films which were scheduled to release in 2020/2021.

Watch the Mini Trailer of Takht 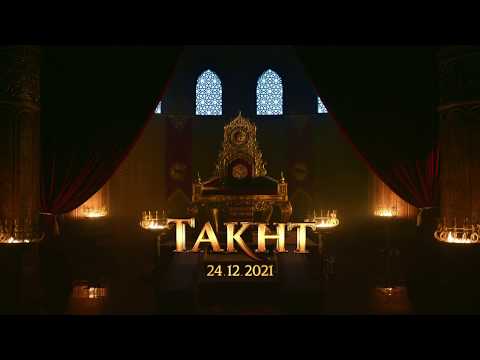 Ayesha is an English graduate with an aesthetic eye. Her fascination lies in sports, fashion and beauty. Also, she does not shy away from controversial subjects. Her motto is: “no two days are the same, that is what makes life worth living.”
Bollywood Weddings cancelled due to Coronavirus
Ali Fazal told Parents ‘WW3’ is Underway to keep them Indoors