In a shocking incident, an Indian father beheaded his 17-year-old daughter because he did not approve of her boyfriend.

he was unhappy with her for being in a relationship

An Indian father has been arrested for beheading his 17-year-old daughter in an apparent case of honour killing.

The shocking incident came to light on March 3, 2021, when the father-of-four was seen carrying her severed head through the streets of Pandetara, Uttar Pradesh.

One resident spotted Sarvesh Kumar and called the police.

It was reported that Kumar was on his way to the police station after committing the gruesome murder.

Two officers arrived at the scene and intercepted Kumar. One officer then filmed the encounter.

They asked him for his name, where he is from and whose head it was. Kumar replies without hesitation.

He then confessed to beheading his daughter, Neelam, with a sharp object because he was unhappy with her for being in a relationship with a man she did not approve of.

Kumar said: “I did it. There was no one else. I closed the latch and did it. The body is in the room.”

The Indian father went on to say that he would have killed her lover too had he been able to track him down.

Officers asked him to put the head down and Kumar did so without protest.

One man checks under Kumar’s clothing to see if he was carrying anything else. 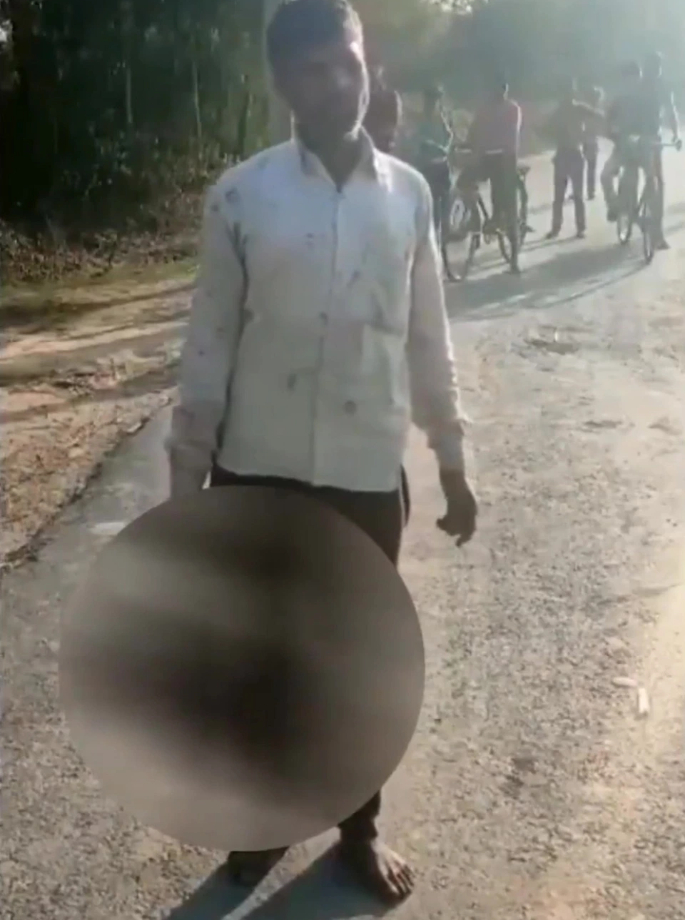 Kumar was then arrested and taken into custody. His wife has since been arrested.

Police searched the family home and found the victim’s body. They have sent it for a post-mortem.

Meanwhile, one police officer was suspended after he was pictured holding the victim’s head “inappropriately”.

“A person named Sarvesh killed his teenage daughter and was spotted carrying her severed head on the road.

“We intercepted him as soon as we received information about it and have taken him into custody.”

“We have also taken serious note of a photo which shows a police official carrying her head inappropriately. The cop has been suspended.”

NDTV reporter Alok Pandey had reported on the case and admitted he struggled with the shocking video.

“She had struck up a friendship with a man from the village and the dad said he did not like it and he was against it, but his daughter would not listen.

“It’s terrible I don’t know what to say.”

Mr Pandey said that the footage was “ghastly” to watch as her father was holding her head by the hair and walking “calmly” on the road before police intercepted him.

He added: “Words fail me. One hopes this man gets the strictest possible punishment.”

According to the National Crime Record Bureau data, Uttar Pradesh recorded the highest number of crimes against women in 2019.

The state also recorded the highest number of crimes against children with over 7,400 cases.

Dhiren is a journalism graduate with a passion for gaming, watching films and sports. He also enjoys cooking from time to time. His motto is to “Live life one day at a time.”
Businessman sold £6.5m in Bogus Flats in Grosvenor Hotel
Indian Teen killed by Father for Eloping with Dalit Man