India is becoming a Wedding Destination for Foreigners

India is becoming one of the most popular wedding destinations for westerners. The picturesque beauty of Desi weddings is captivating the west.

“My favourite was the mantra recitation"

India has charmed the west with spectacular Desi weddings which have drawn in foreigners to the country to say ‘I do’.

According to an online survey by an Italian wedding website, India is the third most popular wedding destination after the Caribbean and Cyprus.

Factors like Bollywood films, Indian celebrity weddings and the beautiful ceremonies have been admired by the west.

This has led to foreigners coming over to India to wed in a lavish ceremony in cities like Goa, Rajasthan and Kerala.

Times of India highlighted the demand for Indian weddings for westerners. Let us explore this trend. 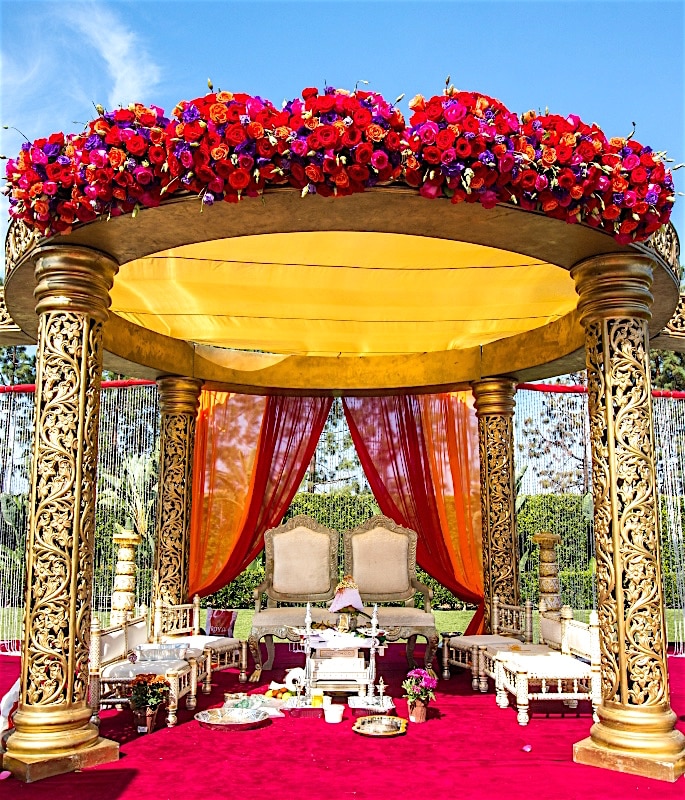 The popularity of Bollywood films, social media and the vast Indian migrant population are all contributing factors for India as a destination wedding option.

Westerners witnessing the numerous rituals such as Sangeet, Mehendi, Saat Pheras and so on have sparked couples interest in Indian weddings.

Taylor Jones, a Los Angeles-based photographer got married in India. He explains what drew him to have an Indian style wedding:

“The first time I watched an Indian wedding was on a TV show called 90210, where two of its characters Ivy and Raj got married in a Bollywood-like wedding.

“It was so fascinating. The colours and rituals looked super attractive to me. Then, I watched a Bollywood movie where Saif Ali Khan and Preity Zinta got married in a lavish ceremony.”

Taylor continued to mention the favourite part of his wedding ceremony. He said:

“We had a legal wedding in the US (United States) last year, and came to India for another ceremony in Kerela, where we said, ‘I do’ with all the rituals that are included in Indian weddings.

“My favourite was the mantra recitation and taking seven rounds around the fire.” 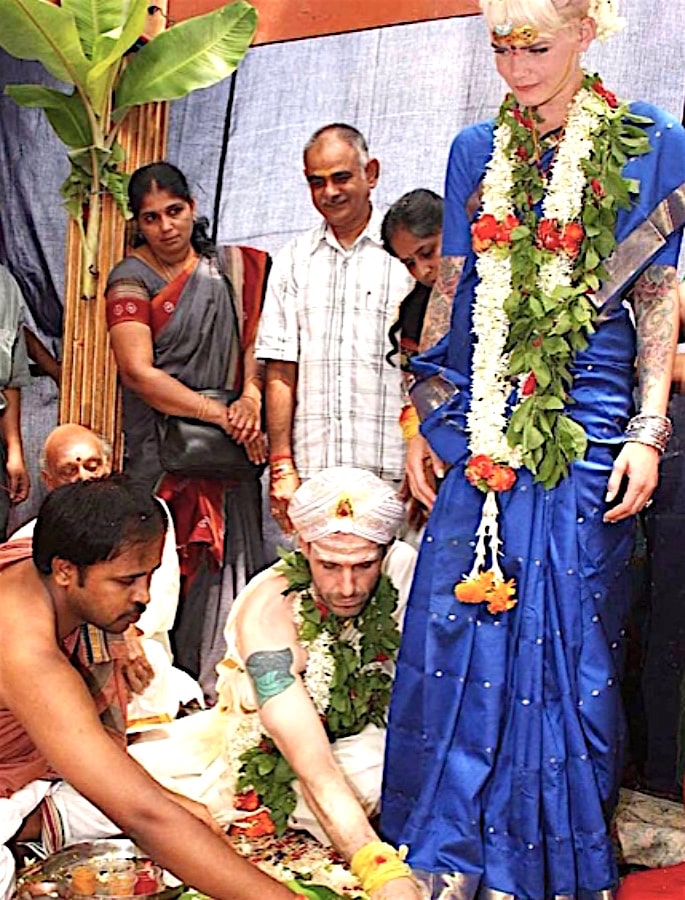 Jennifer Gomes a Delhi-based wedding planner explains how the weddings in India for foreigners are not legal.

They are ritual ceremonies to avoid having to deal with the legalistic side. She explains:

“Almost 90 per cent of the marriages are not legal, but ceremonial in nature, so as to escape the long waiting and bureaucratic process.

“To get legally married in India, one must stay here for more than 60 days, and there’s a tedious waiting process to get your marriage registered here.

“Tourists flock to India for wedding tourism mostly for the ritualistic parts of the ceremony, where they don’t have to deal with bureaucracy and the stress of registering the marriage.

“It is the same for Indians going to places like Amsterdam and Las Vegas to tie the knot.”

Kenneth Smith who lives in Edinburgh is set to get married in India in December 2019.

He has been drawn into the idea of an exquisite Indian wedding because of their unpredictable nature making them exciting. He explains:

“I have been doing a lot of homework on Indian weddings. Weddings are meant to be a fun affair, but here in the west, they are quite predictable.

“In comparison, the rituals like Haldi, henna tattoos, hiding the groom’s shoes, and relatives from the girl’s and boy’s family having a dance-off are all not just memorable, but extraordinary.

“Not to mention, the weddings are fun for all of us, as they involve everyone in the process.”

We want an Anushka, Deepika and Priyanka-style Wedding 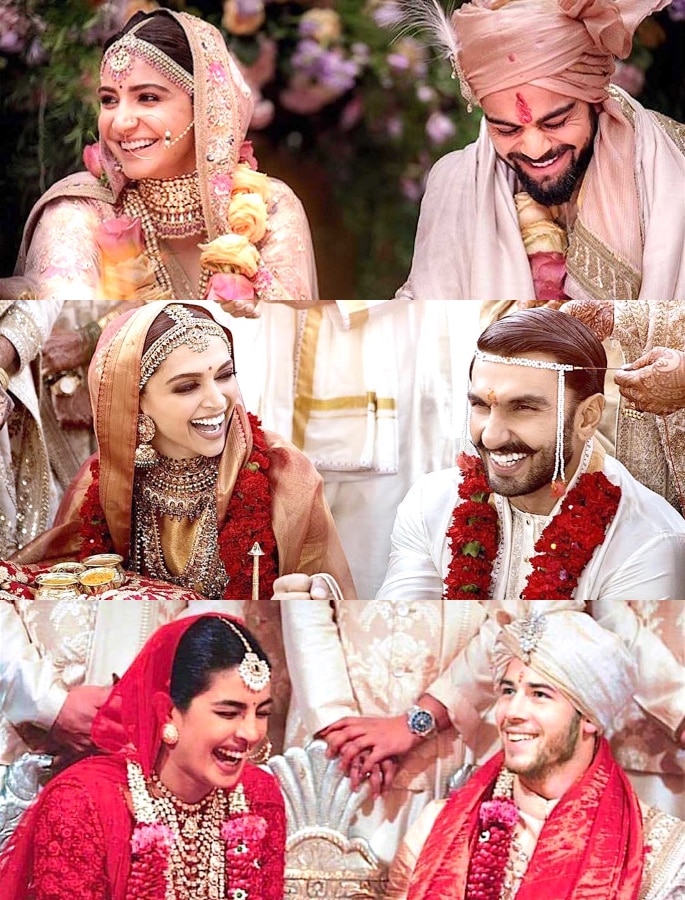 The glamour of Bollywood has been widely appreciated by the west. The grandeur, the colour and the food, everything is unprecedented.

Anushka Sharma and Virat Kholi, Deepika Padukone and Ranveer Singh and Priyanka Chopra and Nick Jonas are all remembered for their amazing weddings.

Wedding planner, Nikhil Agnihotri, based in Mumbai conducted a survey for his company.

His findings led him to the conclusion that over the past three years, the number of foreigner weddings in India has doubled, with various contributing factors. He states:

“Not just Bollywood, but even Hollywood stars like Heidi Klum, Elizabeth Hurley and Katy Perry have popularised Desi weddings abroad.

“Take the example of Priyanka Chopra and Nick Jonas’ grand Indian wedding. It was all over the covers of leading magazines and splashed across the media portals there.

“Even Anushka Sharma and Deepika Padukone’s weddings have made the rounds online and through other media.

“We are increasingly getting calls citing these examples of  Bollywood celeb weddings, and are finalising deals for the same.

“Indian weddings fascinate people there because they are more inclusive of family and friends and the rituals are new to them.”

The Bollywood buzz that is drawing in people from the west to India for a Desi wedding is growing.

Wedding planner, Mayur Kathuria, highlights how the majority of the inquiries his company receives are because of celebrity palace weddings.

He gets requests for the same places in cities like Udaipur and Jaipur. Mayur says:

“The royal aura of Indian palaces, with the bride walking the aisle like a maharani (queen) is what they want in their weddings.

“A – it makes for a perfect photoshoot.

“B – it creates a memory of a lifetime.

“This season, I have received ten such requests from Europeans and Americans, who want a palace wedding where Rajasthani folk music and artisans can tune-up with the festive mood of the Shaadi.

“Not just foreigners, Indians who grew up in the west are equally crazy about lavish Bollywood or palace weddings in India.” 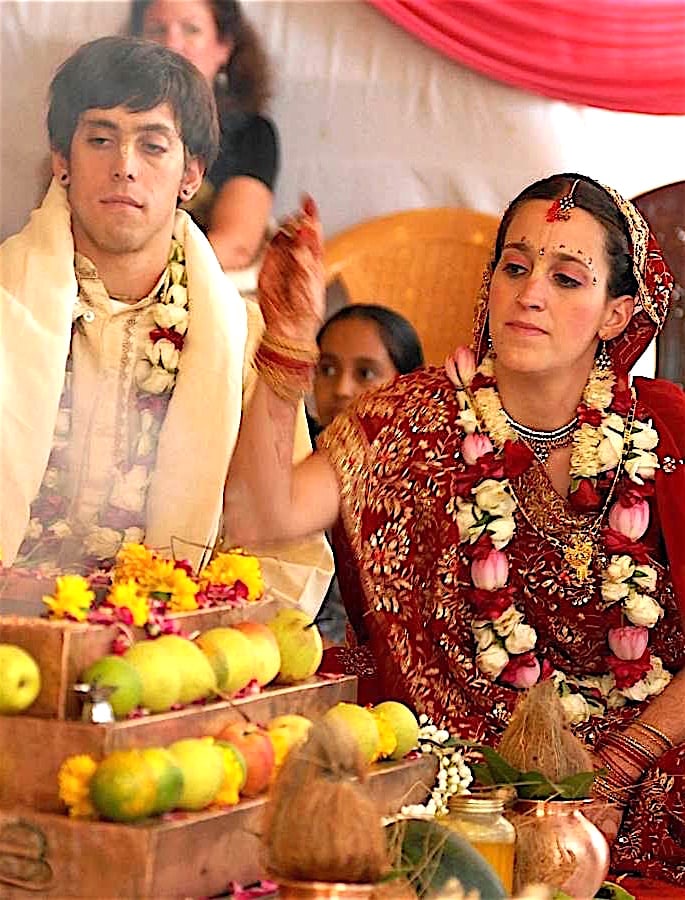 There is no denying the expensive nature of a Desi Shaadi, the spectacular occasion certainly takes a toll on your bank account.

Yet, wedding planners in India have designed numerous wedding packages to cater to the needs of the couple.

Wedding planner, Yogesh Sakluja, based in Mumbai explains how things work. He said:

“From a simple Hindu wedding starting at Rs 2.5 lakh, to a grand Bollywood one, that costs anywhere between Rs 50 to Rs 75 lakh. We curate everything for the westerners in India.

“Along with a package that includes everything, from Mehendi, Haldi and Sangeet, to the Shaadi. We also offer add-ons, like a reception party, Bollywood party and other such demands.

“We can even call in folk singers for weddings, besides providing sarees and designer lehengas to the guests, based on the requests.

“All they have to do it select the package and come here to tie the knot.”

Mexican Paula Ramos is jetting off to India to marry her partner Vincent from Brazil. The couple is set to fulfil their desire for a stunning Indian wedding.

Paula described what made her opt for a wedding in India. She informs:

“I used to watch the Brazilian telenovela Caminho das Indias with my family, and I was completely mesmerised by the wedding ceremonies in the TV series.

“I have wanted an Indian wedding since then.”

“Although our budget is quite low – approximately Rs 5 lakh – we somehow managed to find a wedding planner who offered to do the job in Rs 7 lakhs, including our stay in Jaipur.

“Our demands included a Bollywood dance party and all the Indian wedding rituals.”

Another couple, Canadian Simon Jones and Belgian Venessa Munroe, will be in India in November for their wedding.

Venessa states how it is a Bollywood dream come true for her, she said:

“I want to walk down the aisle just like how Bollywood actresses so in films, with so much grace and elegance.

“We are bringing 20 family and friends with us for the wedding, and the whole ceremony has cost us Rs 15 lakh, which is under our budget.”

There is no doubt that the beauty, grandeur and wonder of an Indian wedding are unmatched.

The desire of having a bright and bold wedding for foreigners leads them to choose a Desi wedding in India.

Alongside the fun of a Desi Shaadi, the memories will live on forever.

Images courtesy of Times of India and Yogi Patel