Retired Wing Commander, Namrita Chandi has criticised ‘Gunjan Saxena: The Kargil Girl’ for its negative portrayal of the IAF.

The film was a deterrent for women to join the Air Force.

An Indian Air Force (IAF) pilot, Namrita Chandi who served alongside Gunjan Saxena has slammed the biopic film for portraying the IAF in a negative light.

Retired Wing Commander Chandi wrote an open letter on Outlook in which she criticised the film’s portrayal of the IAF.

The biopic film, Gunjan Saxena: The Kargil Girl released on August 12, 2020, and has received mixed reviews on the depiction of sexism in the IAF.

In her letter, Chandi wrote:

‘’I have myself served as a helicopter pilot and I have never faced the kind of abuse and maltreatment as was portrayed in the film.

‘’In fact, men in uniform are true gentlemen and professionals.’’

She continued to mention that she trained with Gunjan Saxena and they saw “each other under the worst circumstances.’’

She also stated that the “monstrous” film had little to do with Saxena.

Instead, she went on to blame Karan Johar’s Dharma Productions and its ‘’penny dreadful’’ writers.

She accused them of portraying the ‘’proud blue uniforms in very poor light.’’

However, Chandi did initially agree ‘’that there were teething problems like no changing rooms or exclusive ladies toilets.’’

Despite this, Chandi admitted that she did not feel uncomfortable. This was because her ‘’brother officers’’ would stand guard outside while she got changed. 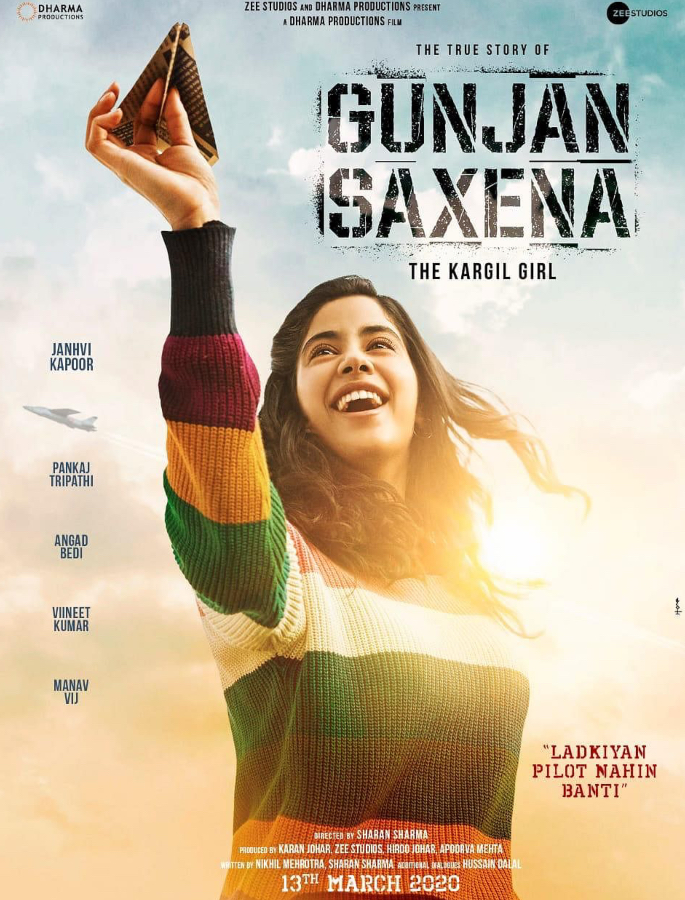 The retired IAF pilot further condemned the filmmakers for ‘’peddling lies.’’  She said:

‘’Srividya Rajan was the first lady pilot who flew to Kargil – not Gunjan.

‘’Though, I am certain that Srividya has no complaints about this credit being taken away from her.’’

Recalling her own credentials, Chandi wrote:

‘’I have myself been the first lady officer to fly on the international border with Pakistan, way back in 1996. I had the confidence of every officer that sat with me in the crew room.

‘’I was the first lady pilot to be posted to Leh and fly the Cheetah helicopter in the Siachen Glacier.’’

She further added that the film was a deterrent for women to join the Air Force.

Also, her fellow female officers were ‘’shocked and saddened’’ about how events have been depicted in the film.

She ended her open letter with a message for actress Janhvi Kapoor who played Gunjan Saxena in the film. She said:

“Lady, let me advise you, please, never do a film of this kind if you are a proud Indian woman.”

As well as Chandi’s letter of disapproval, the IAF complained to the Central Board of Film Certification and Dharma Productions concerning its ‘’undue negative portrayal’’ in the film.

Meanwhile, Gunjan Saxena herself has posted several statements crediting the importance of the IAF in her life.

She also acknowledged the opportunities she was given by the Air Force.

Ayesha is an English graduate with an aesthetic eye. Her fascination lies in sports, fashion and beauty. Also, she does not shy away from controversial subjects. Her motto is: “no two days are the same, that is what makes life worth living.”
Rabia Khan: ‘the Person who Killed Jiah has Killed Sushant’
Bhagyashree says Bollywood is not “a bad place at all”