How to Make Tea for a Tasty Cup of Chai

Tea, or chai, is India’s national drink and it has had a long history to reach that point. Here is how to make a delicious cup of it.

This set the foundation for commercialising tea

Chai, or tea, is India’s national drink and it is fully ingrained in the culture.

It has had a long history and is found on most streets in the country, whether at a roadside stall or at a cafe.

In addition, it is a common drink within households, with people having their own recipe based on their taste preference.

Chai is an infusion of a strong black tea that has been simmered along with milk, sugar and spices.

It is then simmered to allow the spices to properly infuse, resulting in a hot drink that is full of flavour.

We explore chai as well as how to make it. 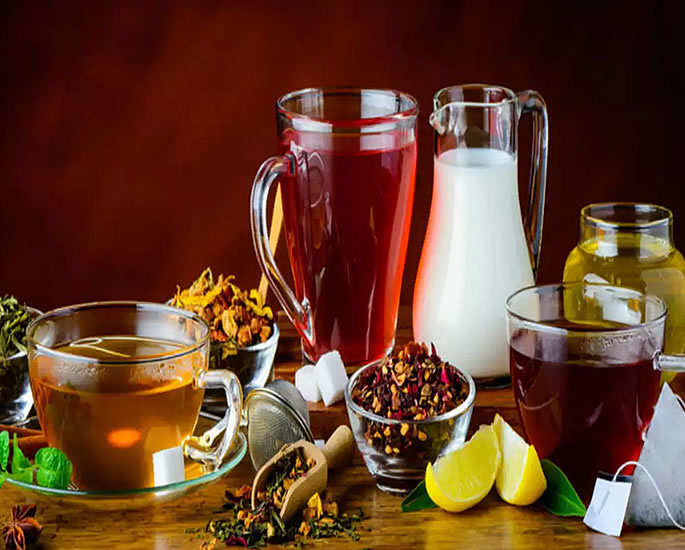 Chai means tea in India and it is an infusion of a strong black tea that has been simmered with milk, sugar and sometimes spices.

Unlike a loose-leaf black tea, you do not steep chai, you simmer the infusion of tea and milk at a medium heat for a few minutes.

Simmering helps combine the tannic strength of a black tea with milk to produce a creamy drink with a dense texture.

For some people, chai may refer to one type of tea but it is actually a general term for a spiced tea blend.

As a result, there are different types of chai, all of which offer a variety of flavours. Here are some of the most popular ones.

When making masala chai, all or some of these spices are used in varying proportions.

Adrak chai is popular during winter.

While the tea is brewing, grated ginger is added.

This type of tea is also considered an elixir for colds because ginger is known for clearing the nose.

The cardamom gives it a sweet flavour, making it a refreshing option to have.

Made famous in Mumbai, this tea has the name ‘Cutting Chai’ because the flavour is said to be so strong that it is only served in half-cup portions.

It is a modified masala chai and is served in small ‘cutting glasses’ instead of traditional cups.

Originating from Kashmir, this is a traditional green tea that is prepared with exotic spices.

Also known as ‘Ghava’ or ‘Kattan Chaya’, this tea originates in South India.

It is black tea with lemon and it is best drank after a heavy meal as it helps with digestion.

Tulsi Chai is known more for its health benefits.

Tulsi leaves, also known as holy basil, are added to the tea and it is believed to strengthen the immune system and relieve stress.

This tea can be made with or without milk and the best time to drink this is in the morning.

The Origin of Masala Chai 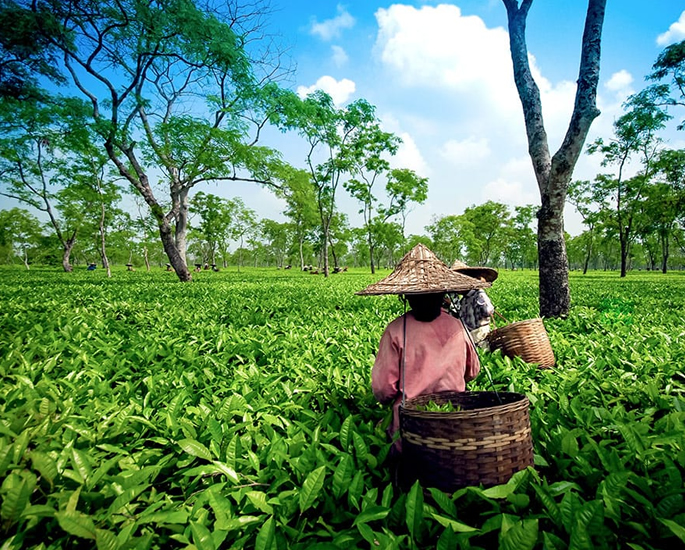 Masala chai in India has had a long history that originally started off as an Ayurvedic beverage.

But it was not until 1823 when a Scotsman named Robert Bruce introduced tea plantations in Assam. This set the foundation for commercialising tea in India.

The cultivation of Assam tea was eventually monopolised by the Assam Company and it led to a period of expansion in the Assam tea industry in the early 1860s.

It led to the cultivation of tea in other parts of India like Darjeeling.

Although the tea spice mix existed in the 1830s, it did not become popular until the 1900s when a campaign by the India Tea Company promoted the provision of ‘tea breaks’ for workers in an attempt to increase tea sales.

Its popularity surged in the 1960s when mechanised tea production CTC (cut, tear, curl) was introduced.

CTC produces an inexpensive tea that infuses quickly and has a strong flavour.

The popularity of masala chai gained momentum and became deeply ingrained in Indian culture and lifestyle.

Today, there are masala chai stalls all over India. From roadside stalls to city cafes, all with their own recipe.

Masala chai has also gained popularity in Western culture, with chai establishments in different countries like the UK. 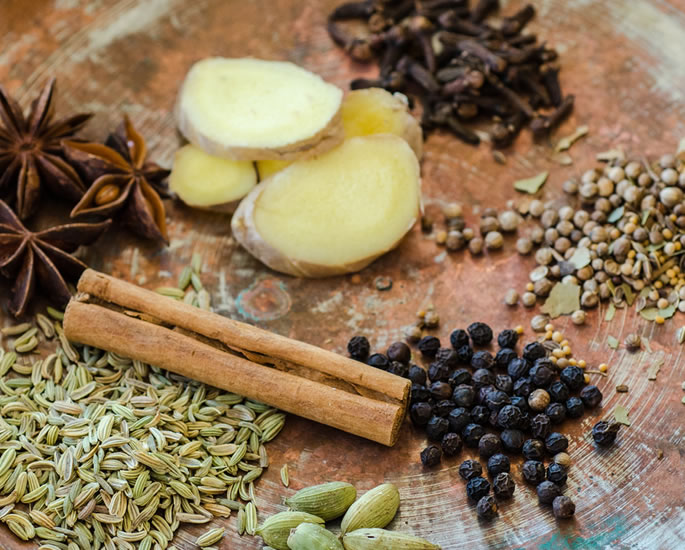 When it comes to chai, the spice blend is what gives this drink its signature array of flavours.

Each household has its own spice blend that works for them. But most ingredients are already in the cupboard.

Common spices to include are cinnamon, cardamom, ginger, cloves and star anise. Sometimes they include fennel, nutmeg, pepper and coriander.

When making chai, the spices are added whole and infused with the mixture as it boils on the hob before being strained out into a cup.

But to make things easier, they can be powdered and mixed together. This makes for a deeper flavoured cup of chai.

To do this, simply place your desired spices into a spice grinder and grind them into a fine powder.

Make sure to try out the spice blend in a cup of chai and adjust the quantity of your spices until you find your desired balance of flavours.

It is recommended to make your spice blend in large quantities and store it in an airtight container. That way, it can be used whenever you fancy a cup of chai.

When aromatic and warming spices come together, they make for an intensely flavoured cup of tea.

But with a good spice blend comes a quality black tea.

Loose black tea is more traditional and it is best to use a strong one. Assam and Darjeeling are both good options.

A Recipe for Masala Chai 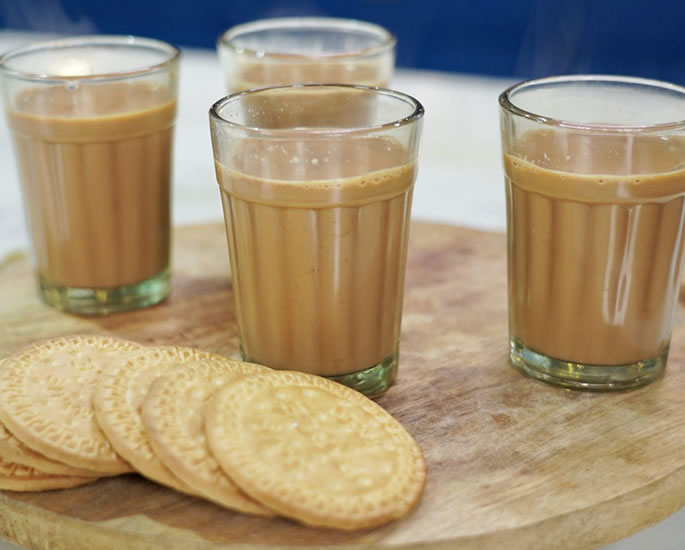 For those who want to make a cup of masala chai at home, here is a simple recipe courtesy of Just One Cook Book.

This recipe yields two cups of tea. To make four cups of tea, double the amount of ingredients. 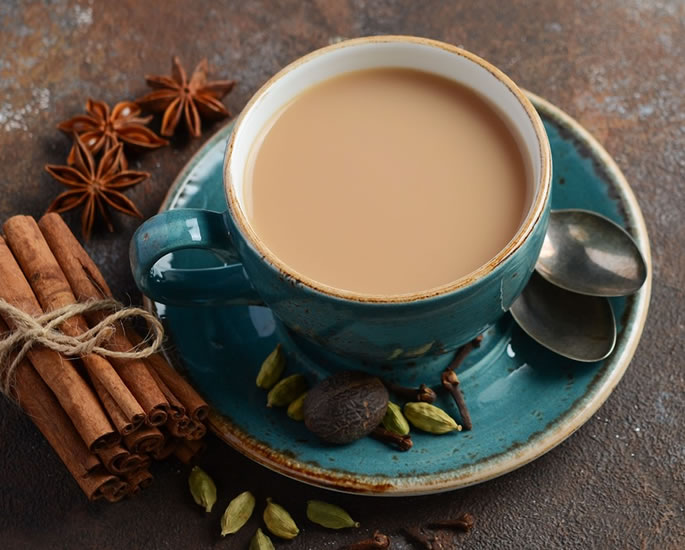 While chai should be made in a saucepan on a hob, it can be time-consuming.

Here is a faster alternative that tastes just as great.

Chai remains a popular drink in India and indeed, across the world.

It is a hot beverage that is great for the cold months but for some, it is enjoyed every day.

Different versions of chai present different flavours but one thing is for sure, it is more than a drink in India, it is part of the culture.

Dhiren is a journalism graduate with a passion for gaming, watching films and sports. He also enjoys cooking from time to time. His motto is to “Live life one day at a time.”
Best Ways to Make Tandoori Chicken at Home
Naan Dough in Sweden leaves Netizens Surprised