5 Places to go for Chai in London

Chai is a staple hot drink made within South Asian households. DESIblitz brings you 5 places in London to get your dose of chai.

"A trip to London is incomplete without a visit to Dishoom."

A perfectly brewed chai, containing spices, is a staple hot drink in many South Asian households.

The art of making an authentic cup of chai has been crafted and passed down over many generations.

British and South Asian cultures have many wonderful differences. However, one thing that is common between the two cultures is the love for a hot cup of tea.

London is beaming with many trendy cafes offering an abundance of hot and cold drinks.

It is not difficult when it comes to buying a good quality tea, hot chocolate, coffee, latte, or frappuccino in London.

However, finding a good cup of Desi chai can be more difficult, especially if you’re looking for one that tastes as good as the homemade stuff.

DESIblitz brings you a list of 5 places in London that you could visit to fulfil your masala chai cravings. 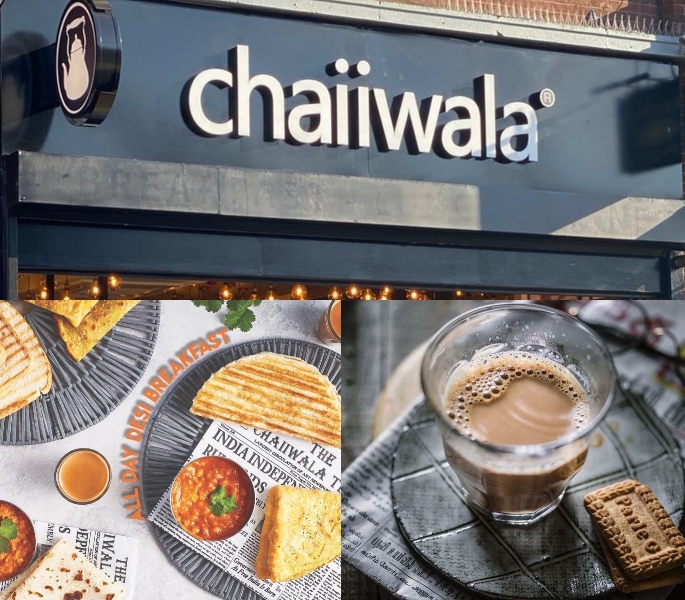 Let’s begin with one of the most well-known Desi tea franchises in the UK – Chaiiwala.

Chaiiwala opened its first store in Leicester in 2015. It quickly grew in popularity and it now has many stores all over the UK.

In London alone there are many stores situated in locations such as Southall, Green Street, Ilford, Walthamstow and Tooting Bec.

Chaiiwala is an Indian street food restaurant. Customers can enjoy a range of street food such as masala chips, a Bombay sandwich, roti rolls, samosas and mogo chips.

They also sell an all-day Desi breakfast, which consists of an omelette, daal, roti and karak chai.

However, the most popular item on their menu has to be their karak chai, which is described as a “sip of the east”.

Karak chai is a creamy and spicy Indian-style brewed tea. Many customers have praised Chaiiwala for their chai, with one TripAdvisor user expressing:

“The karak chai is the standout for me and I’m often left craving another cup once I’m done.”

Alongside their popular karak chai, they also sell garam chocolate, a chai latte and a karak coffee. 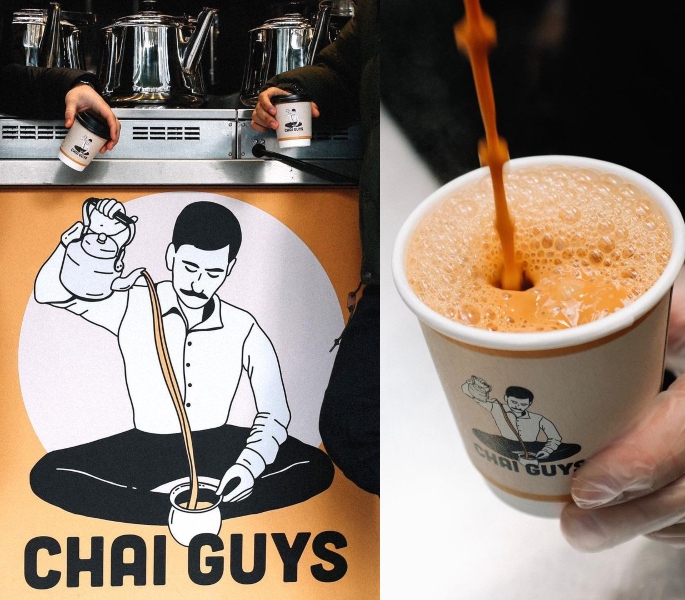 Chai Guys, founded in 2018, is a chai stall located in Spitalfields Market. They claim to have “probably the best chai in London”.

They pride themselves on bringing the authentic chai experience to London. On their website they state:

“We source our teas directly from the gardens of Assam and the mountains of Darjeeling in India.

“Our spices come from around the world and we grind them on-site daily.

“Each chai is brewed using traditional methods to extract all the natural flavours and bring you the highest quality cup of authentic chai.”

In the video, she praises Chai Guys, by explaining that their chai:

“Definitely tastes like the chai that you get back in India.”

Creating the perfect cup of chai takes a lot of time and ingredients.

Unlike other places, they do not have any other hot drinks on their menu. This means their sole focus is creating authentic chai for their customers.

“We realised we had to do a few variations of chai. Just because chai is very personal to either families or regions of India.

“So, we realised that by having a few variations of chai we will be able to give balance to the menu and please different types of customers who are used to a different type of chai.”

They sell a masala chai, which is described as a ”soul-warming, authentic chai with a gentle burn”, as well as the classic kadak cha and a Kashmiri chai.

They also sell a vegan masala chai, which is just like the normal masala chai, but made with oat milk instead.

Currently, they are only offering chai, however, in Summer 2021 they will be opening a Chai Guys in Wembley.

At this location they will be selling a full food menu alongside their chai – so keep your eyes peeled for this!

If you are not in London or would just like to get the Chai Guys experience at home you can also purchase it on their online shop.

They are selling a kadak and masala loose leaf tea, so you can create their spicy and creamy chais at home. 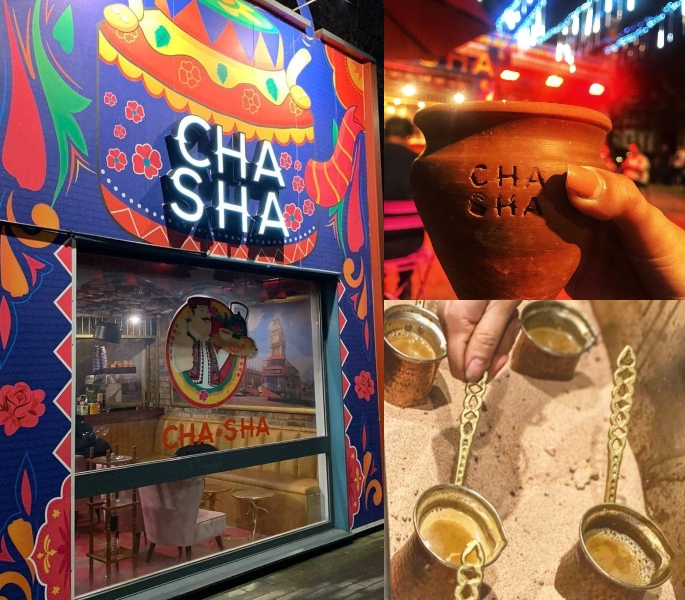 If you are looking for a place that offers both great chai and an amazing atmosphere then it will be worth checking out Cha Sha.

Cha Sha, located on Ealing Road in Wembley, sells a range of Desi food and chai.

One thing that makes Cha Sha unique is that they sell a matka chai for only £3.00.

The matka chai is served in a traditional matka pot that you can in fact take home with you and reuse!

They also serve the classic karak chai for £2.00 and a special Cha Sha blend, which contains cinnamon.

Alongside the classics, they sell an iced chai latte, a Kashmiri coco chai, as well as your usual hot drinks.

What is chai without some food? Cha Sha also has a full Desi food menu, which includes dishes such as chicken tikka, shahi tukray, paneer roll and loaded chicken fries.

Cha Sha has been praised by its customers. It has received a 4.2 rating out of 5 from over 400 reviews on Google. One user said:

In particular, customers have expressed Cha Sha’s loaded fries are a must to try:

“The loaded fries were really good, a recipe I’m going to try at home, loved the Desi twist!”

While another user said: “Best tea and food ever.

“I recommend the loaded chips and chicken tikka. Also, the staff are very friendly and very good customer service.”

“For me, it’s not just about the taste, it’s about the experience as well and I had so much fun visiting Cha Sha.”

If you are looking for a traditional experience in a place with pretty décor and great food check out Cha Sha! 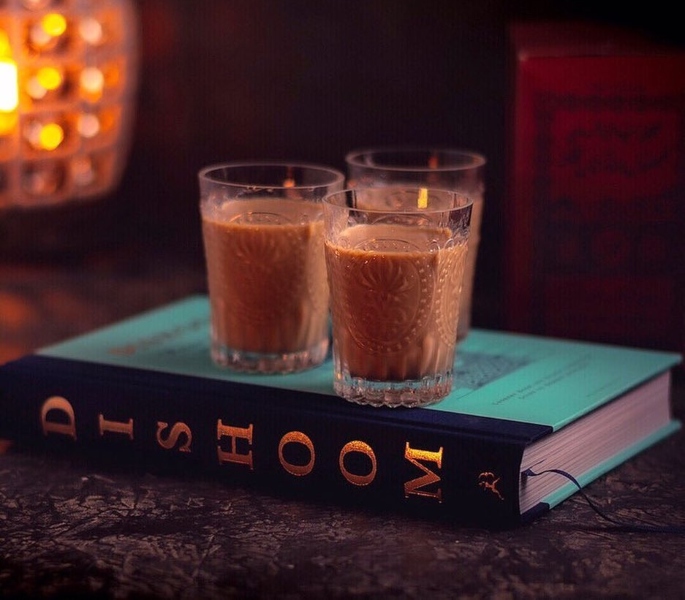 If you are looking for somewhere a little more luxurious for your masala chai then look no further than Dishoom!

Dishoom, first opened in 2010, is a trendy Indian restaurant bringing you the authentic flavours of India.

This restaurant is modelled on the old Iranian cafes of Bombay.

After Irani immigrants moved to British India in the 19th Century, Irani-style cafes became popular within the subcontinent.

These cafes were extremely trendy and popular in the 1950s and 1960s. At their peak, they were more than 350 cafes in India, however, unfortunately now less than 30 remains.

Speaking to the BBC, social anthropologist, Rahul Srivastava explains the importance of these cafes in India:

“Irani cafes became sites for the cosmopolitan experience. They were pioneering eating houses.”

“These cafes broke down barriers by bringing people together over food and drink.

“They were the first places in Bombay where people of any culture, class or religion could take cool refuge from the street with a cup of chai, a simple snack or a hearty meal.”

Dishoom have tried to pay homage to Irani cafes and bring this legacy to the streets of London.

They sell a range of authentic foods such as biryani, paneer roll, bacon naan roll, kulfi and much more!

However, above all, Dishoom is a chai lovers paradise.

Dishoom sells a house chai for £3.20, which is described as:

“All things nice: warming comfort and satisfying spice. Made in the proper way, or with oat milk. All who have tried it are swearing by it.”

It is a firm favourite amongst customers. One TripAdvisor user asserted:

“First delight was the house chai. It was just what was required after our walk from King’s Cross. It was warming, spicy, silky smooth and very reviving.”

You have heard of bottomless drinks, but have you ever had bottomless chai?

Another factor that makes Dishoom stand out is the fact that their house chai is bottomless. This means for only £3.20 you can have as many cups as your heart desires.

So, if you are ever visiting London it would be worth checking this chai spot out! 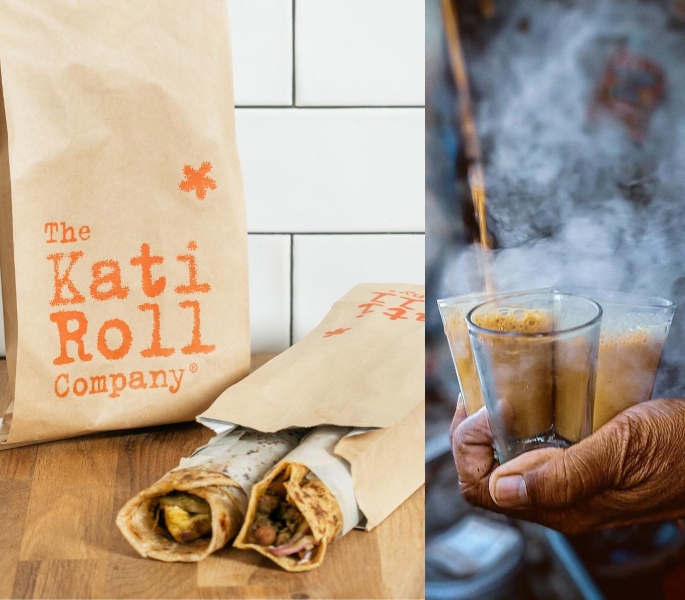 The Kati Roll Company was founded in 2002 in New York by Payal Saha.

Saha moved from Kolkata to New York and opened up this restaurant due to her love for kati rolls.

Kati Rolls are a popular street food item originating from Kolkata, West Bengal. They are made of “skewer-grilled ingredients stuffed in buttery paratha flatbread and topped with chutneys and spices.”

Due to the restaurant’s popularity, they now have four restaurants in New York and one in London, located in Soho.

One TripAdvisor user expressed how this cafe is “one of London’s best-hidden gems”.

The restaurant sells a simple menu of halal meat and vegetarian kati rolls. From an anda roll to an aloo masala roll to a beef tikka roll.

Alongside the food, they sell masala chai. It is described as “Assam black tea flavoured with fresh ginger and cardamom”.

The Kati Roll Company is great for fulfilling your chai cravings without breaking the bank, as one cup of masala chai costs only £1.25 – an absolute bargain!

The restaurant is popular amongst customers and has received a 4.3 rating out of 5 from over 1,700 reviews.

“Great value for money in an excellent location. Just off of Oxford Street, this small joint satisfies the authentic Indian taste bud.

“The chana masala roll is the best and the chai is to die for! Go for it.”

The Kati Roll Company is also a great Instagramable location in London. The walls are full of old school Bollywood posters and the restaurant has a rustic vibe.

It is a great location for capturing your latest Insta pic, while also enjoying a cup of hot chai.

We have brought you a list of some chai places to check out in London.

They all offer authentic cups of Indian tea and some even offer delicious meals to go alongside them.

So the next time you are craving a cup of authentic Desi chai it would be worth checking some of these places out!

Nishah is a History graduate with a keen interest in History and culture. She enjoys music, traveling and all things Bollywood. Her motto is: “When you feel like giving up remember why you started”.
Why Maltodextrin in Food is Bad for You?
Brothers launch Goan Restaurant to Spice up Rotherham