The variety of careers on offer with the RAF are not all about planes. We find out more from Dr Rakesh Patel who is a high ‘flying’ doctor with the RAF.

A lot of people always associate the RAF with flying

Rakesh Patel, 31, Deputy Senior Medical Officer at Royal Air Force Odiham, has been serving with the force for many years.

With his job, he has travelled the world, been invited to the Queen’s Garden Party for tea and has worked his way up to the rank of Squadron Leader.

As an officer in the Royal Air Force, you are expected to lead from the front. In every aspect of your work, you set the standard for men and women under your command.

Rakesh started his promising medical career working as a junior doctor with the NHS; so is he still glad he joined the RAF?

I was looking for an adventure and more variety in my career but at the same time, something that was rewarding and fulfilling.

I heard about the fantastic opportunities to practice medicine with the RAF, so I decided to find out more.

How did your friends and family react when you told them you were joining the RAF?

When I first told my family, they were quite surprised; some were even shocked. My parents were concerned about my safety and security, which any parent would be.

However, once my parents found out more about the measures in place and the lengths the RAF go-to for our safety, they felt a lot more comfortable about me joining.

Now, they are as proud as ever and love telling everyone that I serve with the RAF.

What training were you given? 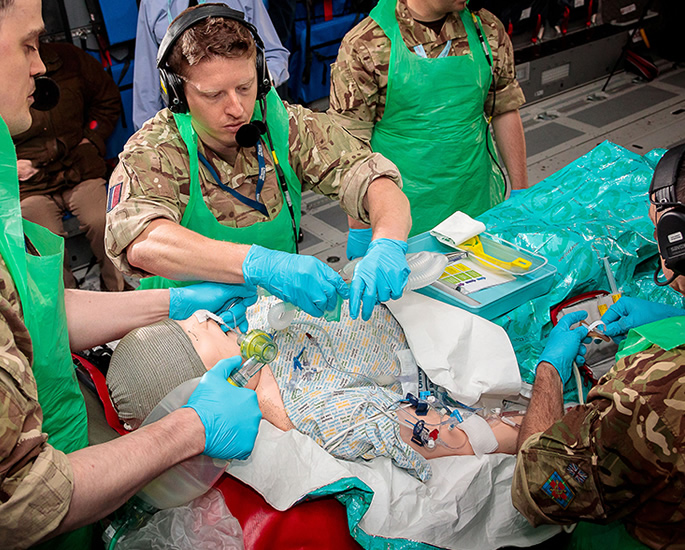 First I had to get through the selection process and then initial officer training which is for new recruits joining the RAF.

I was already qualified as a junior doctor when I started but went on to do a three-year course to become a GP with the RAF.

I’ve since become a member of The Royal College of General Practitioners and have gained three additional diplomas.

The training and career development opportunities have been fantastic, which has always been an important element in my decision to join the RAF.

What challenges does being British Asian in the RAF present?

I don’t really think there are any big challenges for British Asians who want to join the RAF.

The RAF is very welcoming and accommodating to people’s religious and cultural needs.

When I first joined the RAF, I didn’t have many expectations.

However, as a Hindu, my beliefs have always been respected and I have a Hindu chaplain I can speak to for religious guidance and support.

We even have a Diwali function where some of the other Hindus from the RAF got together to celebrate.

What has been your best experience during your time in the RAF?

One of my most memorable experiences is when I was invited for tea at the Queen’s Garden Party.

It’s quite a hard invitation to come by, but through the Royal Air Force my wife and I enjoyed a fantastic experience. It felt like such an honour and privilege to be there.

What advice would you give to a young British Asian thinking of joining the RAF?

My advice would be to do your research.

A lot of people always associate the RAF with flying, pilots and planes, but there are so many different career options and trades on offer.

Speak to the RAF careers line or go onto the website and find out more.

What are your career goals for the future?

My goal is to be as successful as possible with the RAF. It’s been great since I have joined.

I’ve been here and I’m just looking forward to the next challenges and hoping to make a difference.

For more information on careers and life in the RAF, visit their website here.

Amit enjoys creative challenges and uses writing as a tool for revelation. He has major interest in news, current affairs, trends and cinema. He likes the quote: "Nothing in fine print is ever good news."
Living the RAF Dream as a Wing Commander
A better life in India?