Model and social media sensation Faryal Makhdoom has responded to her fan’s comments about her adorable family photo. Let’s take a look.

Mother of three and wife of boxer Amir Khan, Faryal Makhdoom has replied to the responses she received from fans concerning her family photo.

The social media sensation took to Instagram to share a picture of her complete family including her husband Amir, daughters Lamaisah, five, Alayna, one, and son Zaviyar.

The adorable picture, courtesy of OK! Magazine, garnered tremendous attention as Faryal’s fans took to the comment section to shower praise on the family.

While fans praised the family photo, Faryal took time out to reply to her fans’ lovely comments.

Other fans continued to acknowledge how Faryal’s and Amir’s eldest daughter Lamaisah “is growing up so fast.”

Nishsayys: “Your elder daughter is growing up so fast, I still remember you posting toddler pictures of her Mashaa’ALLAH.”

Leanna_wattley92: “When did your eldest get so big?!!”

Faryal: “@leanna_wattley92 I know she’s so tall! Another copy of her dad.”

While other fans shared their love for the couple’s middle child Alayna.

Haleemasshah: “All your kids are beautiful but I Love your Middle child she is a doll MashaAllah.” 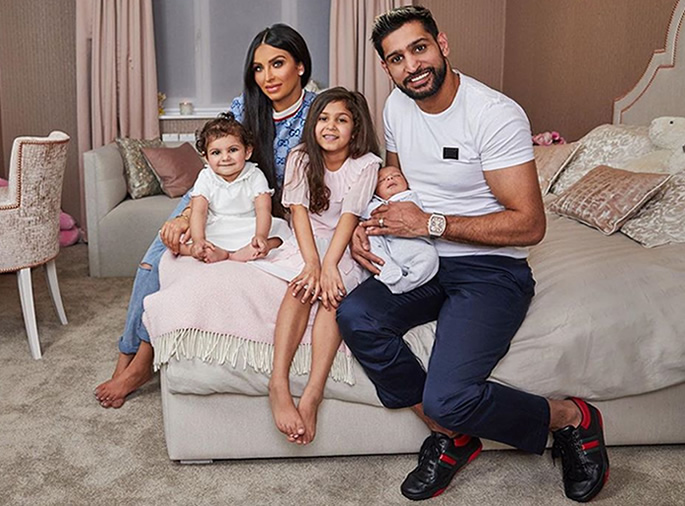 The popular couple opened up about how having separate houses has made their relationship stronger.

This includes the couple’s four-bedroom family home which features a walk-in wardrobe for Faryal and a room dedicated to Amir’s trophies.

The second house which includes two bedrooms is the 33-year-old boxer’s “lad pad.” Speaking about how having children has impacted their relationship, Amir said:

“It’s made it stronger. You think about each other.”

Faryal further added how becoming a parent has positively affected her. She said:

“When you don’t have kids, you think young and act young. But with kids, you do grow up and I think it does definitely make you stronger.

“Sometimes when you can’t stand each other, you have to think that you have children … [laughs].”

“That’s why I’ve got the other house, so I can take a walk there. I swear it’s the best thing ever.”

“I do think having a separate house has made our relationship stronger, because you’re not in each other’s face all the time.

The mother of three also disclosed the couple’s attachment to their Bolton home. She said:

“He never wants to sell it [the house]. We’ve had all our children here. We’ll always have a base in Bolton.

“But we’ll move on at some point to where the kid’s education is best. We do see a future in London.”

In 2004, Amir Khan won a medal at the Olympics and bought their Bolton house right after his win.

Further adding that the house has sentimental value, the boxer said:

“Achieving the Olympic medal is such a good memory for me. I’ve always wanted to leave something behind in Bolton. It will always be my home.”

It is great for their fans to receive a glimpse into their family life. The family photo shared by Faryal has received over 68,000 likes on Instagram.