Faryal Makhdoom has said that the family are all safe after her husband Amir Khan crashed their Mercedes on the motorway.

"Most importantly my family and I are all healthy and doing ok."

Faryal Makhdoom has broken her silence on the crash her husband, Amir Khan, was in on the M6.

Faryal said she is thankful to be home and safe. She also revealed her family were “doing ok” following the scary accident.

Her boxer husband crashed the £90,000 Mercedes after he lost control of it in the rainy weather and collided into the central reservation.

Faryal took to Instagram and said: “Thankful to be home cozy & safe. My family & I were involved in a terrible car accident this weekend.

“Alhumdulilah, I truly believe all the Charity work & Sadaqah is what’s protected us. I just want to Thank you all so much for your kind messages — made me feel so much better.

“Most importantly my family and I are all healthy and doing ok.”

Faryal Makhdoom posed next to the fire in a Christmas onesie from PrettyLittleThing.

Followers wished her well and were glad that the family were safe.

On November 15, 2020, Amir shared pictures of the smashed Mercedes and said:

“Smashing into the side of the motorway barrier felt like being hit with a combo.”

It is unclear who was in the vehicle at the time.

The former world champion filmed the scene of the crash which showed the front bumper hanging off while his hazard lights blinked as he waited for assistance.

The car’s bonnet was also badly damaged and had come unhinged while the rear of the vehicle looked mangled.

Amir had also written on Instagram: “Thank God everyone is safe.

“A scary experience. Car lost control on the motorway #aquaplane.”

This was not Amir’s first supercar related issue. 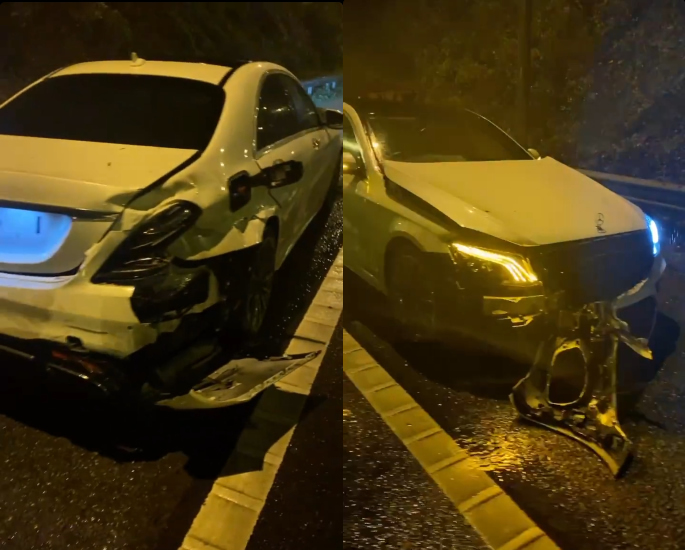 In 2012, the boxer had “knocked out cold” a gang of thieves who had attempted to steal his Range Rover.

The Range Rover itself was worth roughly £100,000 but Amir Khan and his brother both fought off the criminals.

The former world champion does not shy away from his love of supercars. His collection is a clear indication of how successful his career has been over the years.

In a fan Q&A, he revealed that he was considering spending £264,000 on another Rolls Royce.

He had also said he had just bought a new house in Dubai.

Amir said: “I would never leave the UK but I have just bought a lovely holiday home for my family in Dubai.”

Amir also told one fan that he was “thinking of getting” the new Rolls Royce Cullinan, the luxury car maker’s SUV.

Dhiren is a journalism graduate with a passion for gaming, watching films and sports. He also enjoys cooking from time to time. His motto is to “Live life one day at a time.”
Lord Meghnad Desai Quits Labour Party citing Racism
Man jailed for threats to Kill Theresa May with ‘a Knife or a Gun’