Faryal Makhdoom reveals why she took Amir Khan Back

Ahead of their reality show ‘Meet the Khans’, Faryal Makhdoom revealed why she took her husband Amir Khan back after his string of affairs.

"We've moved on. The past is the past"

Faryal Makhdoom has revealed why she took Amir Khan back following the allegations of his numerous affairs.

Ahead of their reality show Meet the Khans: Big in Bolton, the pair revealed that the show has brought them closer.

The couple also spoke about their marriage.

Faryal revealed that she vowed to make her marriage work when she found out she was pregnant with their second child.

She also said that Amir does not cheat anymore because he is “old”.

Faryal said: “We’ve moved on. The past is the past, we were young, we grew up together – the bad and the good.

“Amir was so famous and so young when I first started dating him and married him, and now it’s like… he’s an old man!”

Amir added: “It changes with time.

“When you have three kids, it changes your responsibilities. I’ve had that crazy life before, now I’m a changed man.”

The couple’s relationship has been plagued by alleged cheating.

It was alleged that he cheated on Faryal with beautician Sophia Hammani just days after she gave birth to their second child.

She believed Amir was divorced at the time and only saw that he was married when he shared a family photo.

However, the boxer dismissed the claims, saying she was a fan who got angry when he would not pose for a photo.

He was also accused of having an affair with French lingerie model Eglantine-Flore Aguilar. 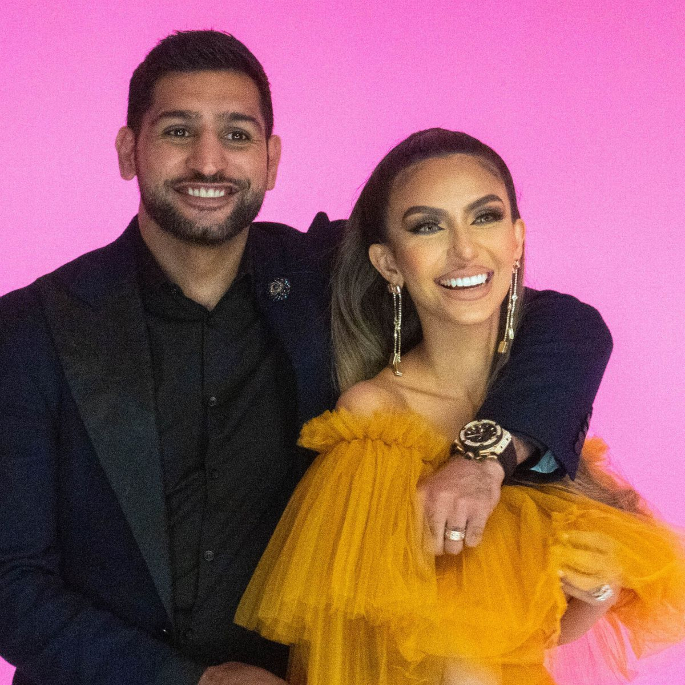 Talking about the impact of cheating, Faryal Makhdoom said:

“Me being a young girl, I would feel kind of betrayed.

“My marriage did go into a really bad place where it was like, ‘That’s it, there is no turning back’.

“But I found out I was pregnant with my second child, so she was like such a blessing, my little angel.

“I thought, ‘For my children’s sake, I’m going to make this work’.

Faryal also seemed to explain away his affairs. She said that while his friends used to spend their time partying, he was constantly training:

“My husband is such an amazing guy but he was never really able to properly enjoy his youth because of all the hard work he did.

“So he kind of never got it out of his system and he’d get caught in the wrong places.

“I saw a great guy who had potential to change and, (him) being the father of my children, it was like I wanted to try harder. I don’t think I wanted to give up.”

The couple briefly split in 2017 and during that time, Amir falsely accused his wife of having an affair with heavyweight boxer Anthony Joshua.

During their split, Faryal Makhdoom suffered from postnatal depression which was made worse by the affair allegations.

They reconciled a few months later.

She said: “I had this baby in my arms but didn’t really have anyone helping me. It was quite hard. You do your best but it’s never enough.

“Every day I’d wake up to comments on social media. Everyone knew the problems me and Amir had.”

The couple have now put their past behind them and say that their marriage is stronger than ever.

Dhiren is a journalism graduate with a passion for gaming, watching films and sports. He also enjoys cooking from time to time. His motto is to “Live life one day at a time.”
Ram Gopal Varma says No Actress has Kangana’s Versatility
Pooja Bhatt slams Covid-19 Rulebreakers