"Everyone needs to see the tiger in me, not a little wuss."

Faryal Makhdoom has been accused of making a “homophobic slur” after she referred to Amir Khan’s taste in music as “gay”.

The 29-year-old was seen in a Snapchat video with her husband sitting in bed listening to music.

As Amir enjoyed the music, Faryal covered her face and winced.

The boxer asked his wife to listen to the song before Faryal said:

She then declared: “Everyone needs to see the tiger in me, not a little wuss.”

The short video clip annoyed some followers, with one user branding her remarks “super disappointing, hurtful and very homophobic”.

Faryal Makhdoom has been in the headlines recently for controversial reasons. 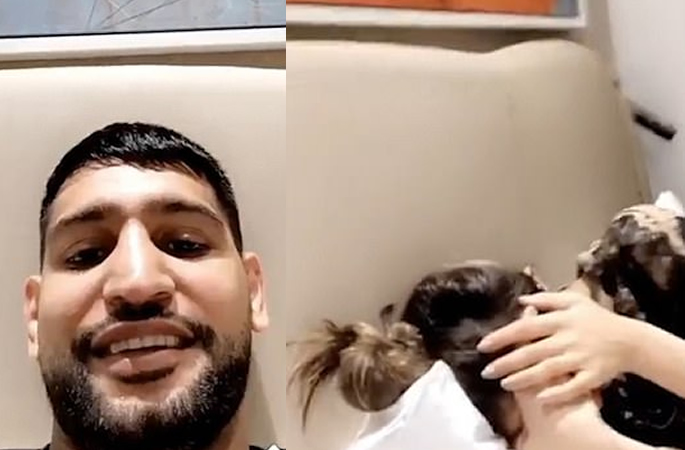 She criticised the UK Government after it introduced Covid-19 travel restrictions for those flying from the United Arab Emirates (UAE).

Her anger came after the government announced that the UAE had been removed from the UK’s travel corridor.

This means that travellers will now have to isolate for 10 days upon their arrival.

The decision was made after the UAE recorded a 52% increase in Covid-19 cases.

All travellers will also be required to have a negative Covid-19 PCR test that has been obtained within 72 hours of travel.

Faryal took to Snapchat and criticised the decision.

She wrote: “The British government has failed the UK.

“New rules around every corner with practically no warning. Feel like I’m living in a dictatorship.”

The UAE, especially Dubai, has become a hot spot for social media influencers who claimed they were allowed to travel there for “work purposes”.

Many were criticised for travelling while the UK faced a national lockdown and for also not maintaining social distance in the lavish destination.

Faryal also sparked concern in December 2020 when she told her followers that she had lost her sense of taste so had not been eating properly for around two weeks.

At the time, Faryal told her Instagram followers that she had lost six pounds:

“Because I’ve not been properly eating.

“Because I couldn’t taste anything for about like two-and-a-half weeks.”

A loss in taste or smell is one of the main Covid-19 symptoms and those with symptoms should not travel. However, Faryal and husband Amir Khan went to Dubai and shared plenty of holiday pictures.

Whilst in Dubai, Amir showed off his new mansion and revealed he bought it for his wife and their three children.

The couple were criticised for flaunting their wealth during a pandemic where many people are struggling financially.

Dhiren is a journalism graduate with a passion for gaming, watching films and sports. He also enjoys cooking from time to time. His motto is to “Live life one day at a time.”
Indian YouTubers arrested after Obscene Video goes Viral
Man raped Woman aged 19 in Alleyway & infected her with STI