Covid-19 travel restrictions have been introduced for people flying from Dubai, however, Faryal Makhdoom is not happy with the move, slamming the UK Government.

The 29-year-old appeared to criticise the decision and branded the government a “dictatorship” over the move.

It comes after Faryal flew to Dubai in December 2020, despite revealing to fans that she had Covid-19 symptoms shortly before her flight.

Faryal’s fury comes after the UK Government announced that the United Arab Emirates (UAE) had been removed from the UK’s travel corridor.

This means that travellers will now have to isolate for 10 days upon their arrival.

The decision was made after the UAE recorded a 52% increase in Covid-19 cases.

All travellers will also be required to have a negative Covid-19 PCR test that has been obtained within 72 hours of travel.

Faryal took to Snapchat and criticised the decision.

She wrote: “The British government has failed the UK.

“New rules around every corner with practically no warning. Feel like I’m living in a dictatorship.”

Her comments came as a host of social media influencers left the UAE before the latest Covid-19 travel rules came into force. 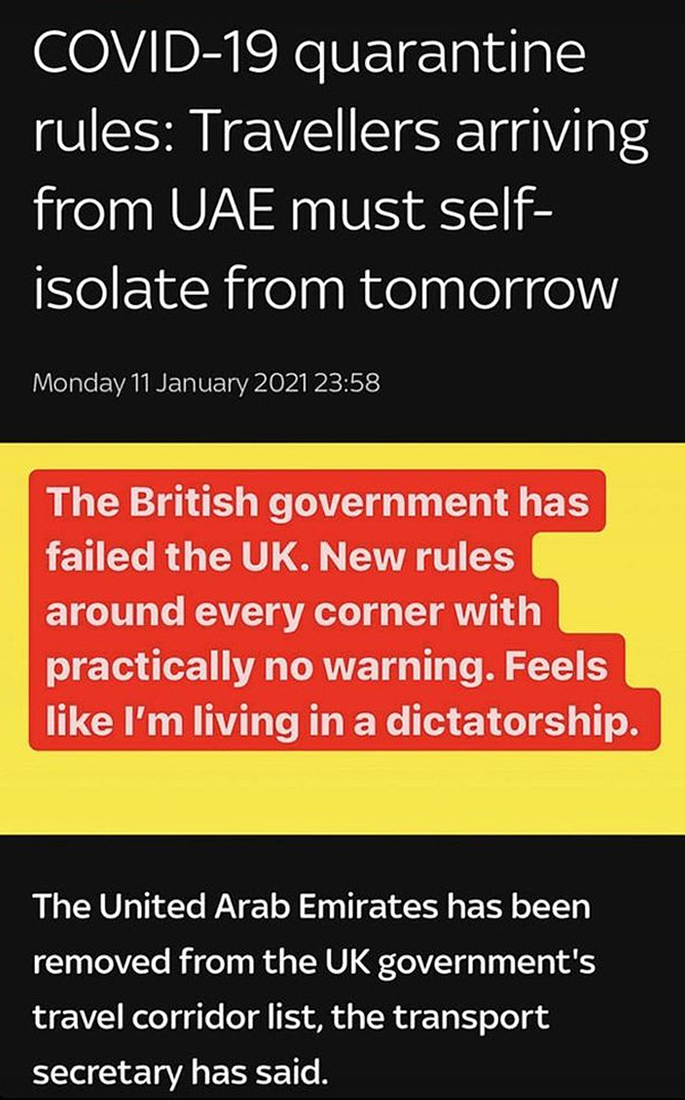 In December 2020, Faryal sparked concern when she told her followers that she had lost her sense of taste so had not been eating properly for around two weeks.

At the time, Faryal told her Instagram followers that she had lost six pounds:

“Because I’ve not been properly eating.

“Because I couldn’t taste anything for about like two-and-a-half weeks.”

A loss in taste or smell is one of the main Covid-19 symptoms and those with symptoms should not travel. However, Faryal and husband Amir Khan went to Dubai and shared plenty of holiday pictures.

Whilst in Dubai, Amir showed off his new mansion and revealed he bought it for his wife and their three children.

The couple were criticised for flaunting their wealth during a pandemic where many people are struggling financially.

The family had also faced criticism in August 2020 after they broke Covid-19 restrictions by hosting Eid celebrations at their home.

While Faryal Makhdoom has slammed the latest quarantine restrictions, others have welcomed the move, saying it has been long overdue.

The UAE, especially Dubai, has become a hot spot for social media influencers who claimed they were allowed to travel there for “work purposes”.

Many were criticised for travelling while the UK faced a national lockdown and for also not maintaining social distance in the lavish destination.