Faryal Makhdoom has criticised Eddie Hearn following the promoter’s comments about a possible fight between Amir Khan and Conor Benn.

“He doesn’t want to face that young smoke"

Faryal Makhdoom has hit back at Eddie Hearn following his comments about a possible fight between Conor Benn and her husband Amir Khan.

The 25-year-old is now being linked with bigger names in the welterweight division.

Earlier in 2021, Hearn campaigned for Benn to fight Amir Khan, but the former world champion opted to go in a different direction.

Instead, Khan finally signed a long-awaited fight with his bitter rival Kell Brook.

The fight will take place at Manchester’s AO Arena on February 19, 2022.

Following Benn’s win, Hearn spoke about the possibility of Khan vs Benn but said it would not be much of a contest.

He said: “I like Amir, but his eyes nearly popped out of his head when I started talking about Conor Benn.

“He doesn’t want to face that young smoke, and that’s why he took the Kell Brook fight over the Conor Benn fight because it’s a friendly affair.

“It’s a little go in and have a dance for several million, and good luck to them, they deserve it.

“But it’s different when you’re talking about Conor and Vergil Ortiz and Boots [Jaron] Ennis. These are horrible, spiteful young fighters that come in to take your head off, and they won’t be doing that in that fight, trust me.

“Could you imagine what Conor Benn would do to Amir Khan? Oh my god. It would be over in two rounds. Two rounds.

“We’d still love the winner, but I don’t think the winner will fight him. This is it for those guys, and this is the future [pointing at Benn].”

Hearn’s comments prompted Faryal Makhdoom to hit back at the promoter.

She took to her Instagram Story and shared a picture of her husband with multiple titles as a 25-year-old, in comparison to Benn who, at the same age, is at the contender stage. 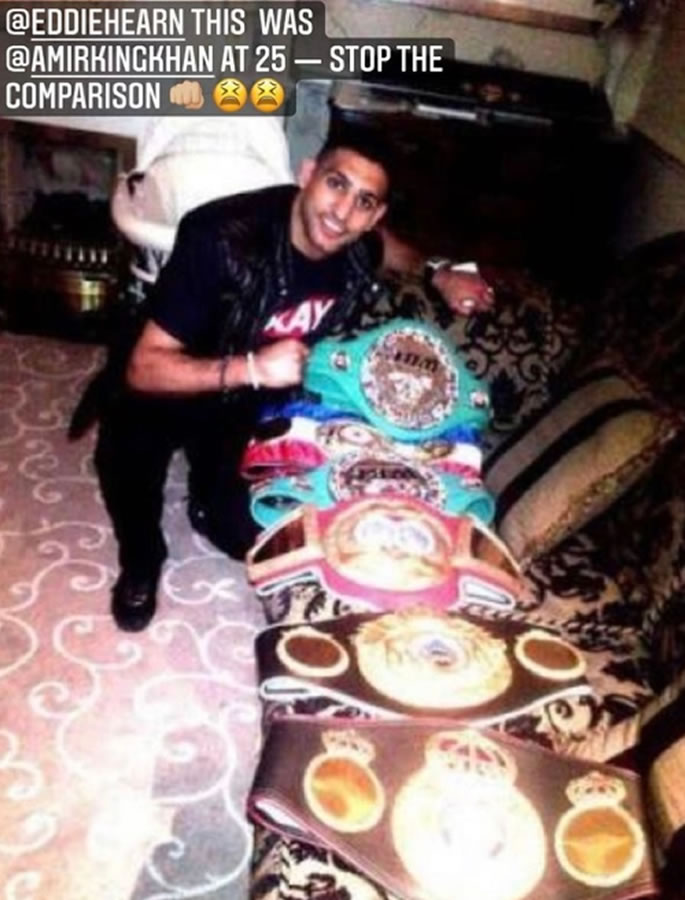 The image was captioned:

“Eddie Hearn, this was Amir Khan at 25. Stop the comparisons.”

Faryal had previously spoken about her husband’s boxing career following a heated press conference between Khan and Brook.

She had said: “I was so impressed, Amir looked really chilled, really confident.

“Some of the things he came out with were shocking, it was funny, it went well, it made everyone laugh.

“Kell needs to – I felt like Kell was a bit boring.”

Dhiren is a journalism graduate with a passion for gaming, watching films and sports. He also enjoys cooking from time to time. His motto is to “Live life one day at a time.”
Rohit Sharma replaced by Priyank Panchal against South Africa
What made Sania Mirza marry Shoaib Malik?