Following the trailer release of ‘Laal Singh Chaddha’, fans have called for Aamir Khan to apologise to Tom Hanks.

The trailer was released during the IPL 2022 final.

It provided a glimpse of Aamir Khan as the titular character going through and experiencing several years of Indian history.

Laal Singh Chaddha is a remake of the 1994 classic Forrest Gump and after numerous delays, it will release on August 11, 2022.

While some viewers could not hold back their excitement, others slammed the film for being a “cheap copy” of Forrest Gump.

“It’s a great movie and is available on Amazon Prime in both English as well as Hindi. Why watch a copy?”

Another commented: “After knowing Laal Singh Chaddha is a remake of Forrest Gump.

“I decided to watch the original movie for FREE and donate the amount of tickets to poor and hungry children. What about you?”

A third said: “And after watching Laal Singh Chaddha‘s trailer it is 100% correct.

“You don’t need 14 years to do a scene to scene remake of a film and to repeat expression of PK/SAMAR. It shows how lazy Aamir is.”

One user pointed out that a number of Aamir Khan’s films are remakes of successful Hollywood films.

Some fans were so unhappy that the trailer has not done justice to the original, that they apologised to Tom Hanks.

One comment read: “Dear Tom Hanks, we Indians apologise for this cheap copy.”

Another said: “I am praying that Tom Hanks doesn’t get to watch Laal Singh Chaddha’s trailer.”

“Why would someone want to watch the cheap copy when we have the original masterpiece?”

“Go through the list of movies and you’ll find cast away, The Terminal, You’ve Got Mail, The Green Mile, Forrest Gump and so many other masterpieces. He can’t be copied.” 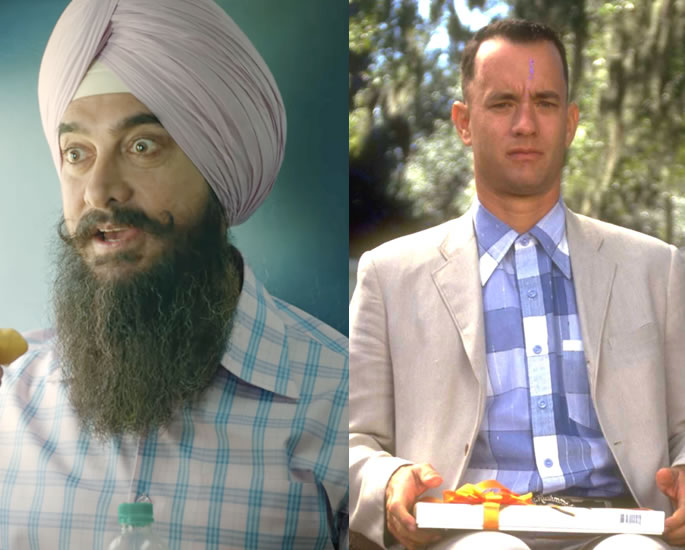 In addition to netizens criticising the film for being a copy of Forrest Gump, Aamir also received backlash for his acting.

Many pointed out that his wide-eyed expression in the trailer was similar to his performances in Dhoom 3 and PK.

One comment read: “There’s something so similar about all these roles even though they’re fundamentally different characters.

“I don’t know whether it’s Aamir being caricaturish or what but it’s getting repetitive and difficult to watch.”

One user was angry about the way Aamir is portraying a differently-abled person.

“I am autistic and this is not even how an autistic person acts. He did the same in Dhoom 3, and I wasn’t happy.

“Couldn’t he have at least consulted an autistic person if he wanted to do the role, as he is considered a perfectionist?

“This is caricaturish and to be honest, kind of mocking us.”

As I said earlier, Aamir Khan is strictly an average actor with very limited range of expressions.

Some people have called for the film to be boycotted, citing different reasons.

The backlash has resulted in #BoycottLaalSinghChaddha trending on Twitter.

Many brought up some of Aamir’s old statements.

One person called for a boycott, saying: “Aamir Khan said, ‘India is intolerant and he wants to leave India’.”

It was not just Aamir facing backlash for his old comments, Kareena Kapoor was also called out for the comments she made when discussing nepotism.

When asked about nepotism, Kareena had stated that the audience made them into stars before saying:

“Don’t see our films, no one’s forcing you.”

Netizens called for others to pay heed to Kareena’s comment by not watching Laal Singh Chaddha.

One angry person who referred to Kareena as an “arrogant snob” in 2020, wrote:

“Said it 2 years back. Saying it again. Arrogant SNOB Kareena Kapoor Khan’s films are not worth anybody’s money.”

The topic of Bollywood’s alleged dark side was also brought up on social media, something that has been in the limelight since the tragic death of Sushant Singh Rajput.

Although Laal Singh Chaddha had been touted as one of Bollywood’s biggest films of 2022, the trailer has left little to be desired among social media users.

Dhiren is a journalism graduate with a passion for gaming, watching films and sports. He also enjoys cooking from time to time. His motto is to “Live life one day at a time.”
Shamita Shetty opens up on Relationship with Raqesh Bapat
Why is Mouni Roy being called ‘Sasti Wanda’?