Bollywood actress Kangana Ranaut has been told to apologise for her outspoken tweets in relation to the ongoing Farmers’ Protest.

Kangana Ranaut has painted farmers in a poor light

Bollywood actress Kangana Ranaut has been told to apologise for her tweets on the current Indian Farmers’ Protest.

If she does not, Congress leaders in Madhya Pradesh’s Betul district have threatened to not allow Ranaut to continue filming for her upcoming film Dhaakad.

Kangana Ranaut has been drawing attention from all over the globe for her tweets on the ongoing Farmers’ Protest.

Many have shown support for Ranaut for standing up for what she believes in. However, others have slammed the Bollywood actress for calling out farmers in their protest.

In response to a report on her derogatory tweets, Ranaut took to Twitter again to reiterate that she is not interested in politics.

Congress leaders have alleged that Kangana Ranaut has painted farmers in a poor light due to her public opinions on social media.

They have demanded that she apologise to the farmers, or they are threatening to stall the shoot of her new action film.

Kangana Ranaut has been shooting for Dhaakad in the Sarni area of Betul.

This is not the first time that Kangana Ranaut has come under fire for her bold opinions on Twitter.

The Bollywood actress has been known to have her tweets taken down by Twitter due to them not conforming to the platform’s guidelines.

Twitter took action against Kangana Ranaut by deleting some of her previous tweets about the ongoing Farmers’ Protest in India.

The social media platform did so on account of Ranaut violating their rules.

Kangana Ranaut has been very active on Twitter recently by responding to tweets from international celebrities on the farmers’ protest. 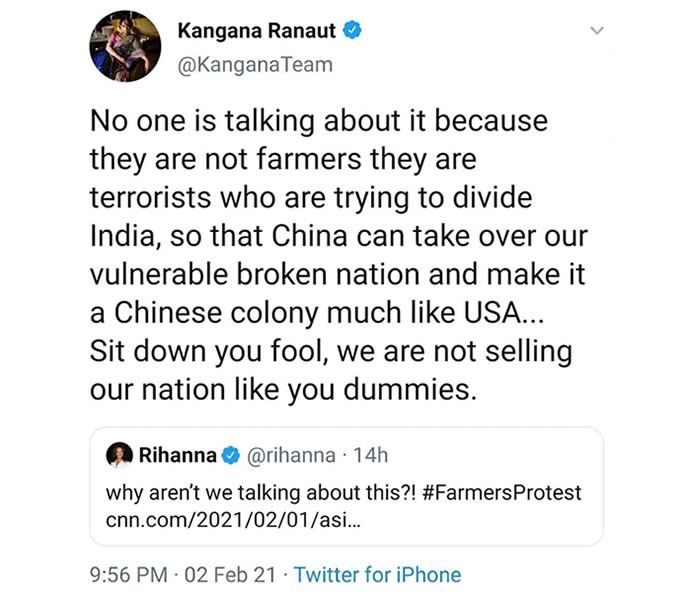 Responding to a tweet by Rihanna asking why no one was talking about the Farmers’ Protest, Ranaut replied:

“No one is talking about it because they are not farmers they are terrorists who are trying to divide India, so that China can take over our vulnerable broken nation and make it a Chinese colony much like USA… Sit down you fool, we are not selling our nation like you dummies.”

Kangana Ranaut’s response came on Tuesday, February 2, 2021, and has since been deleted.

Louise is an English and Writing graduate with a passion for travel, skiing and playing the piano. She also has a personal blog which she updates regularly. Her motto is "Be the change you wish to see in the world."
Priyanka Chopra says 2016 Break-up left her ‘Numb’ & ‘Isolated’
Trevor Noah explains Farmers’ Protest on ‘The Daily Show’