Bollywood actress Kangana Ranaut has had some of tweets deleted by Twitter for violating the rules of their platform.

"Why all these cricketers sounding like dhobi ka kutta"

Social media platform, Twitter, has taken action against Kangana Ranaut’s account and deleted her tweets stating they violate their rules.

The tweets were removed on Thursday, February 4, 2021, by the microblogging platform.

The reactive tweets from Kangana were all related to the ongoing Indian farmers’ protest.

One tweet which has been deleted is where she is accused of being derogatory is where she refers to numerous Indian cricketers “Dhobi ka Kutta”.

To which she responded saying:

“Why all these cricketers sounding like dhobi ka kutta na ghar ka na ghat ka? Why would farmers be against laws which are revolutionary for their well-being. These are terrorists who are causing ruckus. Say that na…itna daarr lagta hai?” 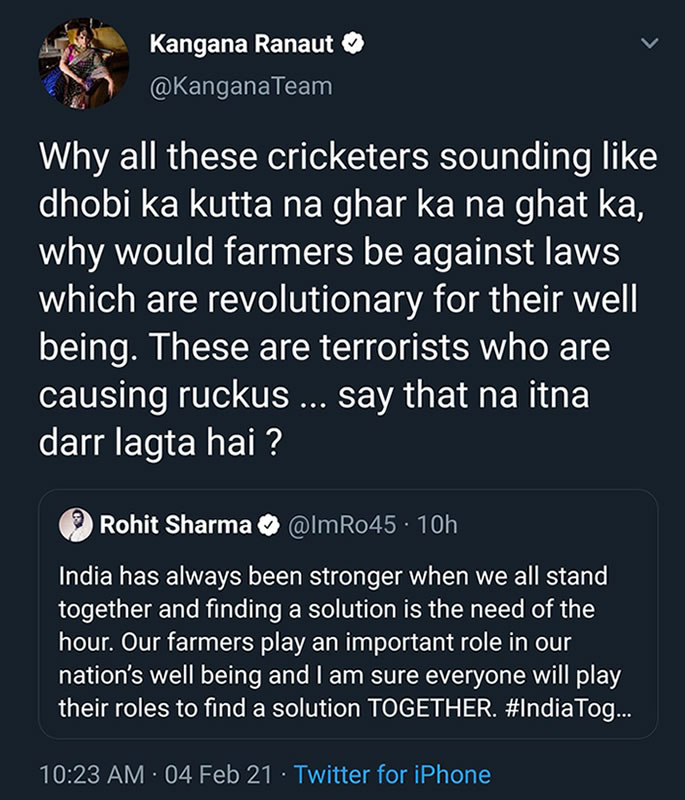 A number of her other tweets have been removed by the platform.

She has been having many challenging Twitter conversations with Punjabi singer and Bollywood actor Diljit Dosanjh related to the Indian farmers’ protest and if or not Diljit is a ‘Khalistani’. 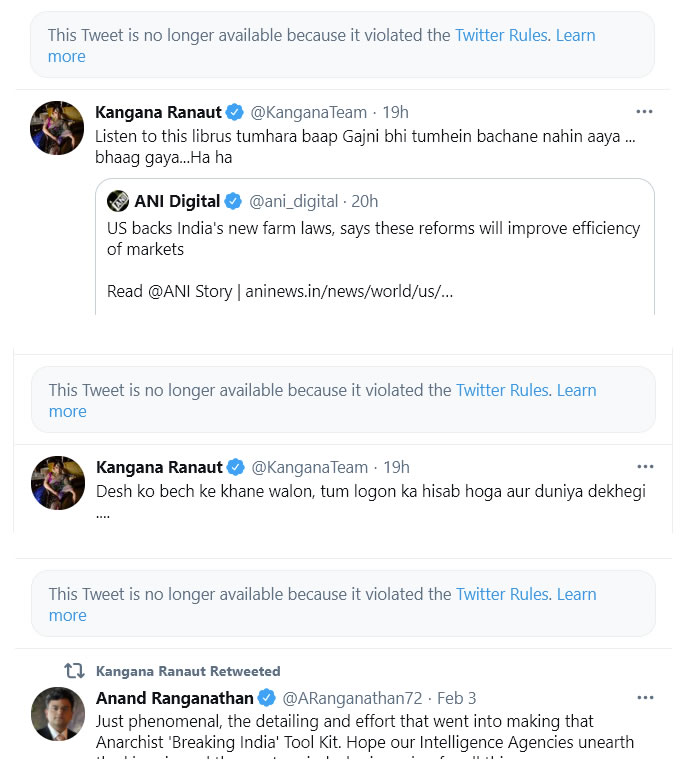 She has been active on Twitter responding to tweets from international celebrities raising concerns or questioning the Indian farmers’ protest.

Responding to tweets from the likes of Rihanna, Greta Thunberg and others.

When international pop star Rihanna posted a tweet asking about why no one was talking about the protest, Kangana replied saying:

“No one is talking about it because they are not farmers they are terrorists who are trying to divide India, so that China can take over our vulnerable broken nation and make it a Chinese colony much like USA… Sit down you fool, we are not selling our nation like you dummies.” 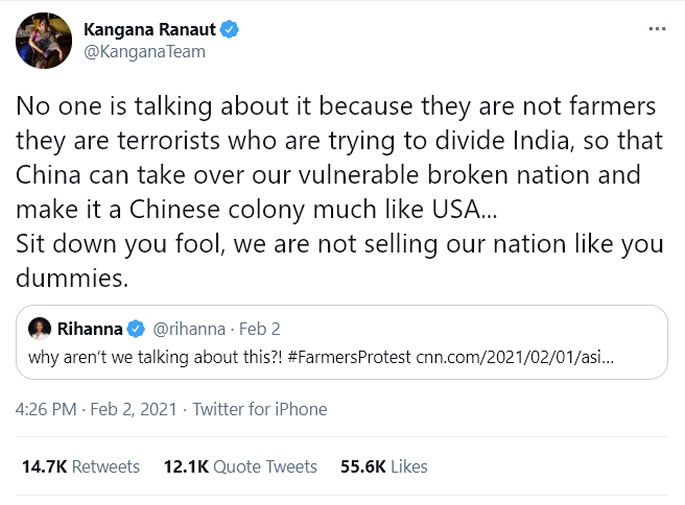 She then went onto comment with a reply to a tweet by Amit Kumar who spoke of Canadian parliamentarian Jasmeet Singh.

The behaviour by Kangana Ranaut on Twitter has not gone unnoticed by the platform and subsequently, put out an open statement after the delete of her tweets.

“We have taken action on Tweets that were in violation of the Twitter Rules in line with our range of enforcement options.”

However, Kangana took to Twitter again to say she did not violate any rules and that the platform tried to suspend her account, calling the platform a “China puppet”. 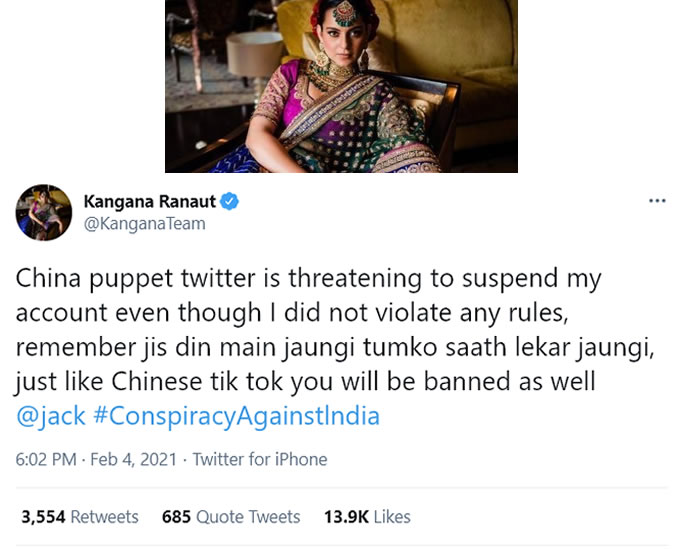 She included the handle of one of Twitter’s founders, Jack Dorsey, in her tweet saying:

“China puppet twitter is threatening to suspend my account even though I did not violate any rules, remember jis din main jaungi tumko saath lekar jaungi, just like Chinese tik tok you will be banned as well @jack #ConspiracyAgainstlndia”.

The Hindi part of her tweet translates to “the day I go, I will take you with me”.

Nazhat is an ambitious 'Desi' woman with interests in news and lifestyle. As a writer with a determined journalistic flair, she firmly believes in the motto "an investment in knowledge pays the best interest," by Benjamin Franklin.
Jasmin Bhasin to re-enter ‘Bigg Boss’ house
Salman Khan speaks out on Farmers’ Protest