“I personally feel Tom is a wonderful actor and amazing person."

As Irrfan Khan arrived in Budapest to shoot for the film adaptation of Dan Brown’s novel Inferno, he received a special welcome from co-star, Tom Hanks.

On the card with a plain background is a personal message that appears to be written with a typewriter.

To add to the nostalgia, Tom signed it with a fountain pen. He also took the time to include a miniature imprint of his face.

My journey of @infernothemovie began with a captain's note @tomhanks pic.twitter.com/MEbtAmLJuU

His fans are loving it, not only because two amazing actors will join hands for a stellar performance in the popular film series, preceded by The Da Vinci Code (2006) and Angels and Demons (2009).

Many are pleased to see the comeback of typewriter fonts. As Tom recently launched his typewriter app called ‘Hanx Writer’, it is likely this gorgeous message for Irrfan was created with his number 1 app on the iTunes store.

Respect between the two actors is clearly mutual, as Irrfan also gave the legendary actor his highest compliment after their meeting in April 2015.

He said: “I personally feel Tom is a wonderful actor and amazing person. I met him for a brief time, but I look forward to work with him once the shooting starts in couple of weeks.” 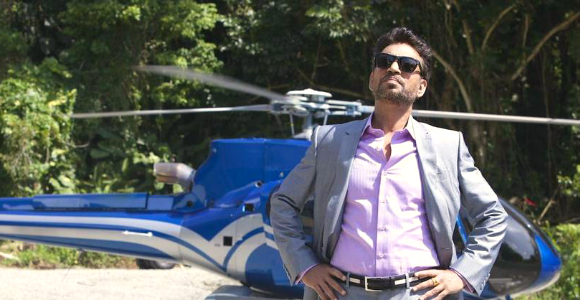 Irrfan plays ‘The Provost’, the head of The Consortium who will clash with Langdon in their quest to locate a deadly virus.

Having taken on a multitude of characters in films such as and Haider (2014) and Jurassic World (2015), the versatile Indian actor is set to impress audience once again.

Inferno is planned for release on October 14, 2016 and will also star Oscar-nominee Felicity Jones and French actor, Omar Sy.