An established 3D artist has updated his LinkedIn profile to include Fallout 4 Cinematic Trailer, sparking rumours the new instalment will be released soon.

Rumour has it a 20-30 minute gameplay demo is gearing up for presentation at E3 Conference.

Speculation of a new Fallout game has sparked, after a 3D artist updated his LinkedIn profile to include ‘Fallout 4 Cinematic Trailer’.

The contract artist, name unrevealed, has recently listed the new trailer as his latest work experience.

Also listed are the artist’s previous work in cinematic trailers for Far Cry 4 and The Elder Scrolls.

This further convinces the new Fallout trailer may actually be the real deal.

Though the profile is only available to close connections on LinkedIn, screen grabs reveal the trailer was created at Guillermo del Toro’s production company, Mirada Studios.

With his previous project, Silent Hills, being cancelled, it looks like the Pacific Rim (2013) director has been contributing to a new Fallout game instead.

But it is also possible that del Toro is not directly involved in Fallout 4, as he is one of four co-founders of Mirada Studios. 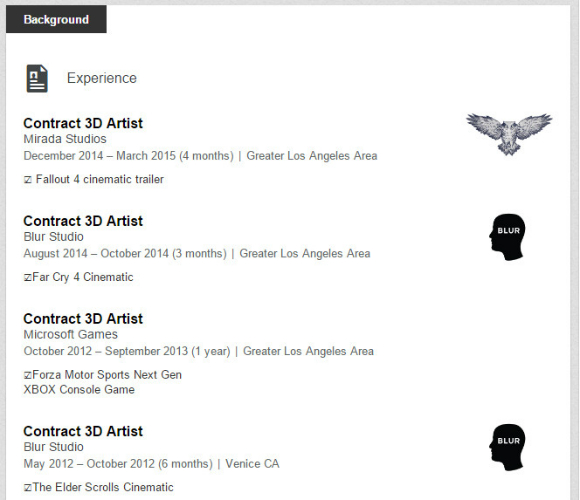 One of the biggest talking points about the 3D artist’s resume is that the Fallout project ran from December 2014 to March 2015.

The timing aligns with suggestions that Fallout 4 will be unveiled at Bethesda’s E3 conference in Los Angeles on June 16-18, 2015.

This will be the first time Bethesda holds its own press conference at E3, adding fuel to the fire of the big reveal – the highly anticipated Fallout revival.

The Maryland-based video game company also has a history of making Fallout announcements at the LA conference, supporting the hype around its imminent release.

Bethesda has neither confirmed or denied whether Fallout 4 is in production, but rumour has it a 20-30 minute gameplay demo is gearing up for presentation at E3.

With the last Fallout release dating back to 2010, a new instalment in 2015 to end the long drought is only a fair reward for those who waited patiently.

Christina is an English Literature and Film graduate who enjoys photography, music and gaming. Always using writing to explore her interests, she hopes to expand her creativity alongside others. Her motto is “Leave the world a little better than you found it.”
How to Set Up iPhone Location-Based Reminders
Taxi Sharing App Launches in London