An earthquake hit the western parts of the United Kingdom with a magnitude of 4.4 in South Wales. Residents as far as Birmingham experienced the tremor.

Parts of the United Kingdom experienced an earthquake with a major magnitude of 4.4. The epicentre of the strong tremor was near Swansea in South Wales about 2.30 p.m.

The British Geological Survey reported the epicentre as Cwmllynfell at about 20km north-north-east of Swansea and at a depth of 7.4km.

The experience has left some damage to buildings and the general feeling of shock amongst people as they felt ‘violent shakes’.

The majority of the earthquake shook mainly the western parts of the UK. People reported earthquake activity from Plymouth, Bristol, across Wales and up to Blackpool.

The earthquake is reported the strongest to hit in South Wales in more than 100 years.

As the tremor struck it instigated panic amongst people running out into the streets thinking it was some kind of huge explosion or crash. Students at Swansea University were evacuated. 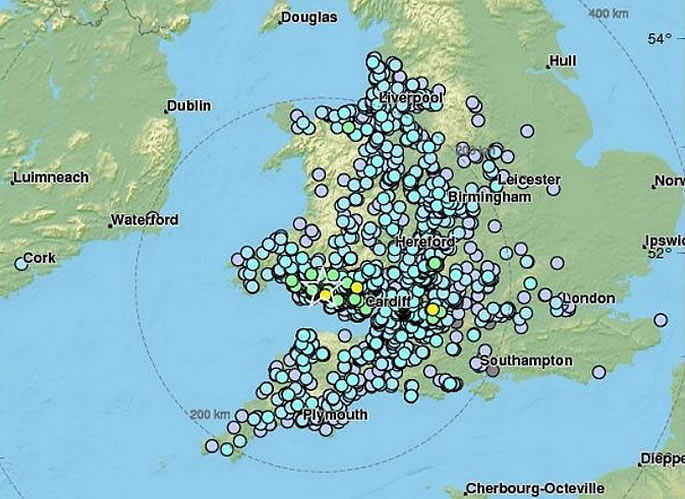 People experienced the shakes into Birmingham and the West Midlands, where it shook buildings and caused a power outage. One British Asian Birmingham resident said:

“I was sitting in my chair and felt my chair move and then I saw my television screen shake. It freaked me out thinking what was that.”

After a power cut -possibly an earthquake!- our phones, internet and ticketing system are down. Please bear with us whilst we work to restore the systems. Although MAC is still bustling and open for business.

Myles Mears who was in Rhondda, in Wales, at the time and describes the moment she experienced it:

“We were all sat there just talking and all of a sudden the house just started shaking. The settee was moving and everything and we didn’t know what was really going on.”

The owner of The Dillwyn Arms Hotel in Pontardawe, Tracey Pritchard said:

“We thought a lorry had gone into the building and we actually went outside to look because we’re on a cross roads. But one of our customers went online and saw it was an earthquake.

“It’s just surprising – we’ve never had anything like this before.”

The EMSC, an independent scientific organisation based in Paris received more than 1,000 reports about the incident.

Amit enjoys creative challenges and uses writing as a tool for revelation. He has major interest in news, current affairs, trends and cinema. He likes the quote: "Nothing in fine print is ever good news."
Indian Woman married Two Women as a ‘Man’ for Dowry
Zainab Ansari Rapist & Killer gets Death Sentence in Pakistan