Hosted by BritAsia TV alongside Metatron Global Fund, the awards are the first of their kind in the UK.

They celebrated the best of the Punjabi Film industry. Punjabi film fanatics had the chance to vote for their favourite actors, actresses, directors and others.

As their favourites winners were announced, the night featured performances from Punjabi talents like Sharry Mann, Sunanda Sharma and Jasmine Sandlas. The latter also was an excellent host for PFA 2018.

This was truly a star-studded event right in the heart of Birmingham.

Glamorous Stars in the Heart of Birmingham 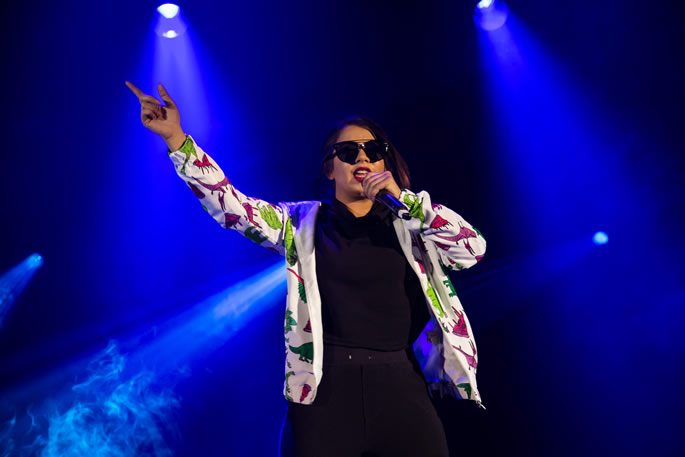 An evening full of glitz and glamour took place in the prestigious ICC. Guests were greeted by drinks and the chance to watch the stars on the red carpet before heading into the impressive banqueting hall.

The spacious hall with its clever staging system gave an exclusive feel to the show. An additional central stage and overhanging cube-shaped screen complemented the main stage. This crucially allowed a clear view for the night’s performances.

While it began later than hoped, host Jasmine Sandlas kicked off the awards ceremony with charm. She also treated the audience to her singing talents by performing songs like ‘Illegal Weapon’.

Although, her comedic rapport with the audience and passion for acknowledging Punjabi talent meant that her hosting skills almost overshadowed her singing skills.

She introduced the first award for Best Debut Performance by highlighting how important it was to celebrate new talent. Indeed, it was easy to agree with how this award was a fantastic way to begin the ceremony. 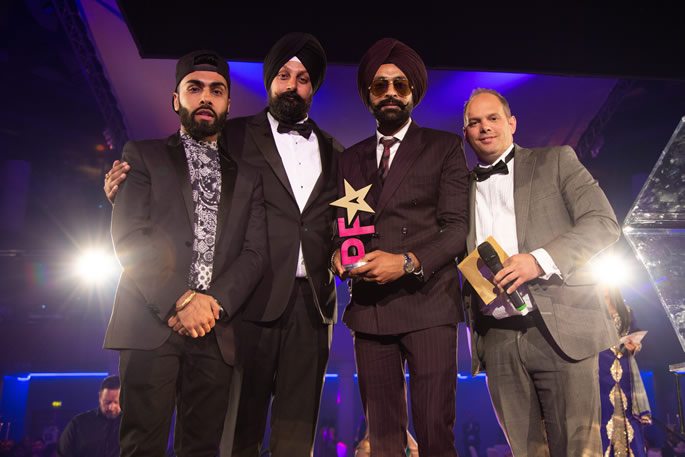 Starters had been served prior to the commencement of the ceremony. But over the remaining two courses, a range of established Punjabi talent presented awards including Balwinder Safri and Gippy Grewal.

They appeared alongside newer talent in the industry such as Raxstar.

This, therefore, kept a nice balance between the glitz of international stars and realising the importance of PFA 2018 to Birmingham.

Hitting All The High Notes 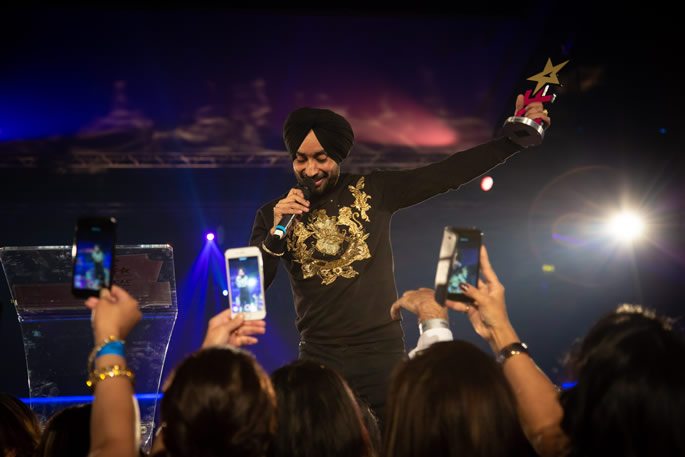 After winning the Outstanding Achievement award, Satinder Sartaaj treated fans with a rendition of his songs. Just before his special performance, he expressed his gratitude for this recognition:

“I am extremely overwhelmed. It’s the first time these awards are happening in the UK, and I really appreciate that. Being a part of international cinema, and being a part of the history of Sikhism with The Black Prince – it is really honourable for me.

“I was only able to do this because of the Punjabis residing all over the globe – the love and affection and their wishes are the treasure of my life.”

His onstage appearance was a real highlight to PFA 2018 alongside the later performances of Sunanda Sharma and Sharry Mann. 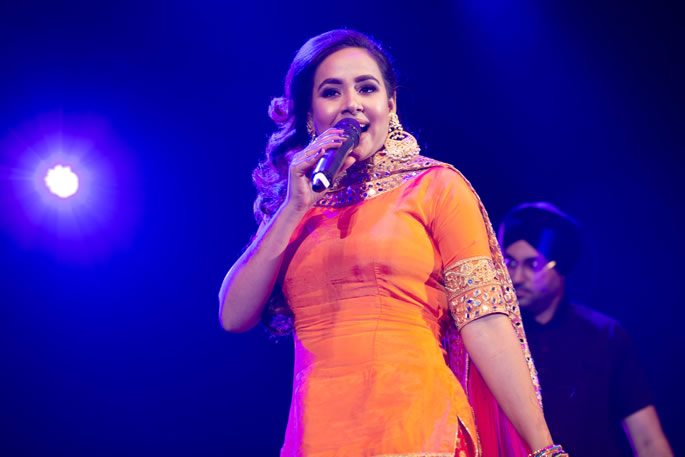 In fact, this was singer and actress Sharma’s first UK performance and she delivered both energetically and passionately. Clearly flying high from her debut acting role in Sajjan Singh Rangroot, she won over all with her great vocals.

After entering the crowd, she then joined her colourfully dressed backing dancers to ensure everyone was in the mood for the next great performance.

When speaking to one of Sharma’s dancers, Tiann Benning, about the opportunity to perform alongside the star, Benning revealed:

“It was really good performing with her. She’s so lovely and so is her management and the rest of her team. She’s probably one of the most humble and nicest artists I’ve met and had the pleasure to perform with.

“The whole performance went really well and she was the only artist to come and join her dancers on the centre stage, which meant a lot to us.”

Similarly, Sharry Mann did his part to provide a memorable end to the night. Following Sharma, he had everyone up and dancing all around the hall.

Indeed, all the special performances of the night including Harrdy Sandhu and Gurj Sidhu added a special touch to BritAsia TV’s PFA 2018. 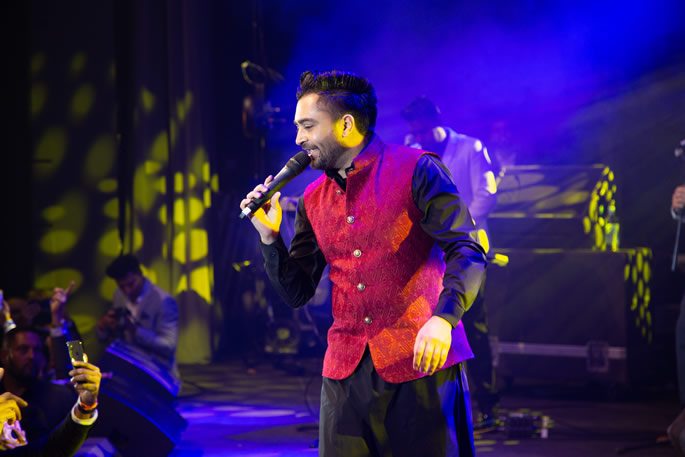 Above all, the chance to have an event like BritAsia TV’s PFA 2018 was a great opportunity for the Midlands.

Speaking to Wolverhampton-born and Best Actress nominee, Mandy Takhar, she commented on the show’s proximity to her home-town:

“Finally! I’m really happy that it’s happening. It’s been like seven years that I’ve been working out there and it’s nice that more people from England are opening more doors for British Punjabis and getting more support. It feels great.”

Indeed, she revealed her hard work on the hit film, Rabb Da Radio, reminding us of all the hard work actors put into their craft:

“First of all, I went to shoot about four days prior to my shooting that was about to begin. And I kind of sat with the writer and observed the villagers and their mannerisms in that village in particular. And I just tried my best to take it day by day, you can’t overthink it.

“When you do any film, it’s very important to know what your character is supposed to do in terms of its background, you can’t be playing a girl from 2015 if you’re one from 1985.” 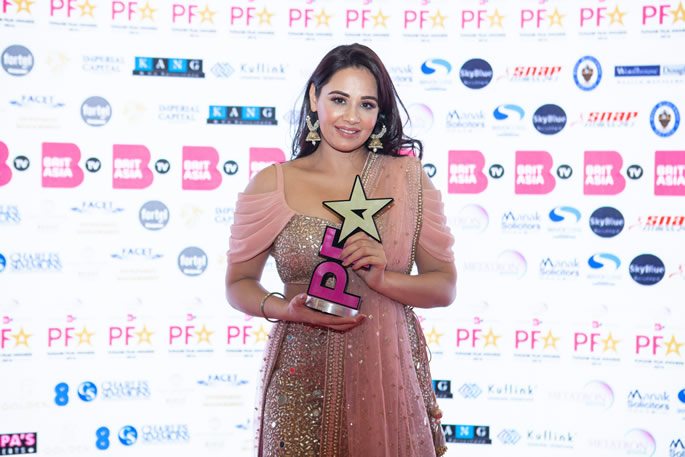 “An actor just has to observe life and observe people. That’s why we always look spaced out, but we’re just watching life pass us by and we’re trying to make that into reality or we’re just trying to represent that on screen.”

This made her win of the Inspiration Award all the more significant. When speaking about her Best Actress award nomination, she described awards as the “icing on the cake”.

Similarly, singer and actor Harrdy Sandhu was clearly enthused about his return to the city after his first UK performance for the Birmingham Mela:

“I’m pretty much happy for BritAsia that the Punjabi Film Awards are happening for the first time. Just excited to see how people react to my songs, who haven’t seen…I don’t perform often here, so pretty much excited, yes.”

But it seems more exciting things are yet to come over the next year as he revealed to us:

“For 2018, I’m working on two tracks, which are eighty percent complete. But I’ve worked a lot for the last eight months, so I’m taking a break, going to Australia for twenty days – my family lives in Australia – so I’ll be back and working on them again. I’ll be releasing two songs this year and working on some Bollywood tracks as well.” 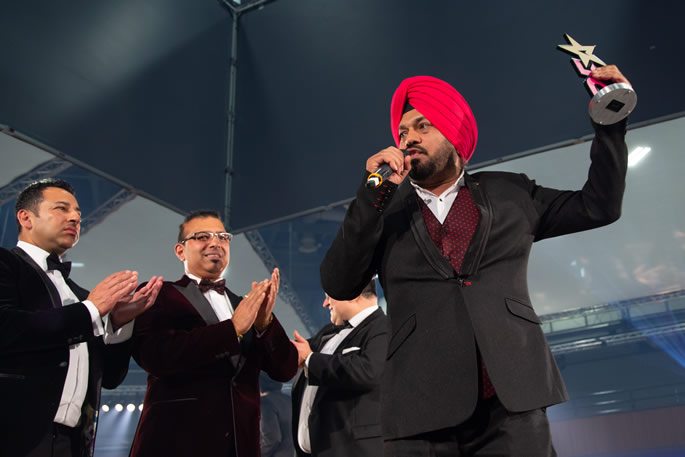 Actor and comedian, Gurpreet Ghuggi displayed the same hard-working attitude, telling us how acting is his life and comedy is his passion:

“Life has no value without passion and passion doesn’t have any value without life. If life isn’t there, passion is not there either.”

It’s evident that this inspiring ethos led to his win of the Special Recognition Award. In fact, when encountering so many of his fans at PFA 2018, he told us:

That is something I think doesn’t matter for your life. As an actor, the most important thing in your life is how many people you have in your life who love you as an actor.” 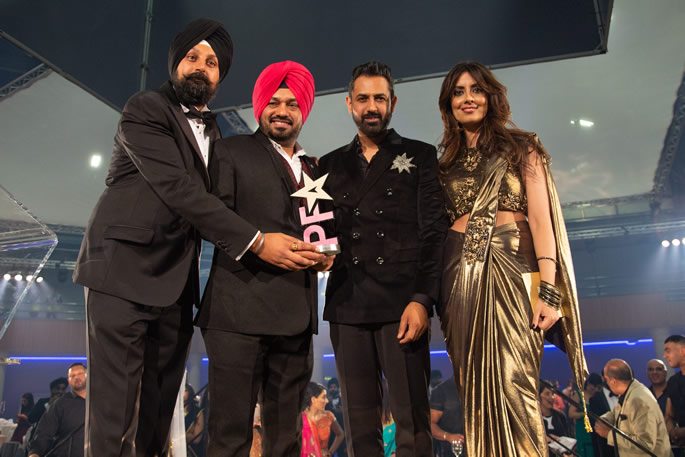 “It’s been just fifteen years that the new era for Punjabi cinema has started. So in fifteen years, we are now having huge huge audiences in different countries. I think in Canada, the UK, the US, Australia, New Zealand, Europe – I think in a very short span, it’s a great achievement.”

Because of this, it feels as if PFA 2018 isn’t just any awards show but a real way for actors in a more niche film industry to receive valuable appreciation for their hard work. Perhaps this makes such an event feel special more than any glitz or glamour.

Here is a list of the winners at BritAsia TV Punjabi Film Awards 2018:

The first ever UK PFA 2018, proved itself to be a very rewarding night for the award nominees and winners. It was an important celebration for their work and contribution in putting Punjabi cinema on the map.

While a fight mid-ceremony interrupted the good-will of the night, Sandlas went above-and-beyond as a host to diffuse tension in the room and smooth over the disruption. Again, it was the talent of the stars that really made the evening special.

With the hope that it could address its inaugural year feedback, 2018’s ceremony bodes well for the award show’s future.

DESIblitz would like to congratulate the night’s winners as well as the nominees.

See more images from the first ever BritAsia TV Punjabi Film Awards in the gallery below: 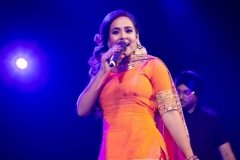 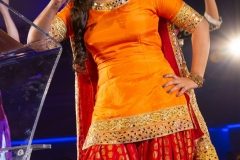 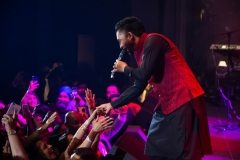 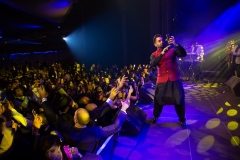 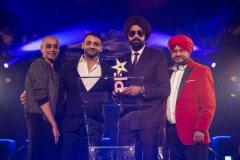 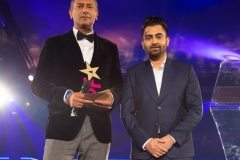 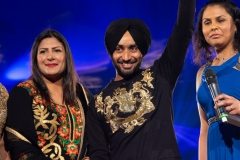 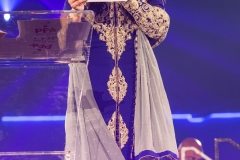 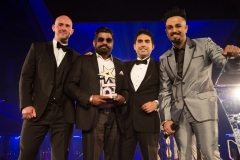 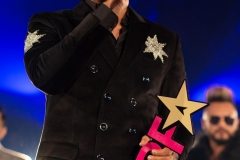 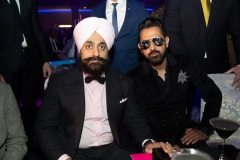 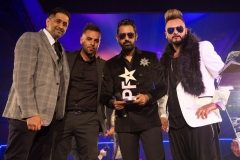 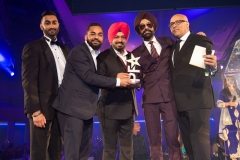 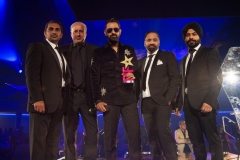 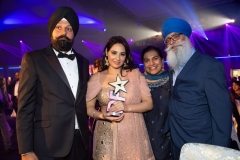 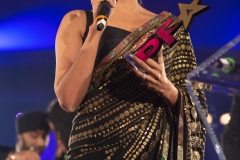 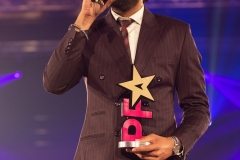 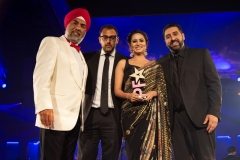 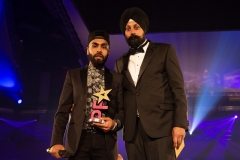 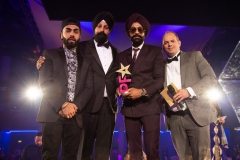 Quantico: Priyanka Chopra’s US TV Series gets Axed
Bollywood Celebrity Depression: What are the Causes?