The curtains came down for the Birmingham 2022 Commonwealth Games. We reflect on the closing ceremony and some of the fantastic sports action.

"I was jumping up in the air with joy."

The closing ceremony of the Birmingham 2022 Commonwealth Games was a special moment to celebrate for everyone in the  UK and beyond.

The finale festivity was a befitting tribute to all the athletes, fans, organisers and their respective teams, bowing out with flair.

The incredible eleven days of sporting action went in a flash for many thousands of us who had an involvement with the games.

There were 30,000 people in the home of UK Athletics to watch all the spectacular performances and be part of the closing elements.

The closing event was an entertaining one, echoing the passionate and proud performances of sports people, whilst highlighting and setting Birmingham alight. 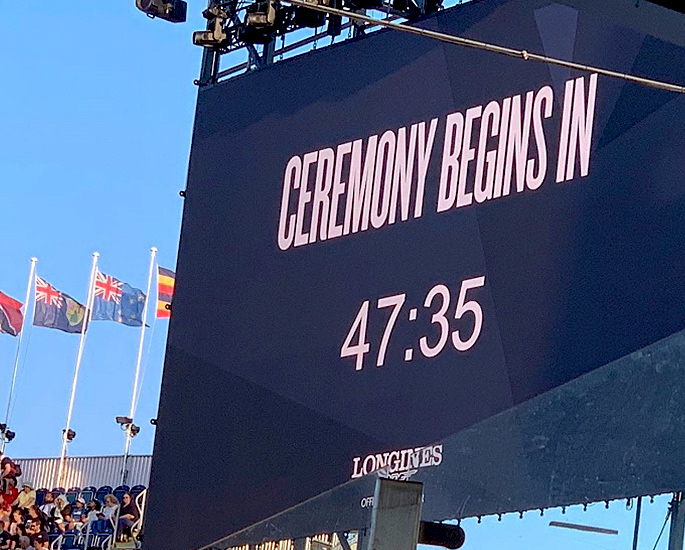 Desi music, especially Punjabi tracks as well as mainstream songs kept everyone in the groove as the Stadium went into countdown mode.

Following a short sports highlights showcase from the Games, as the clock struck 8 pm, it was time for all attendees to rock and roll.

We highlight the closing evening of the Birmingham 2022 Commonwealth Games, with a reflective mood. 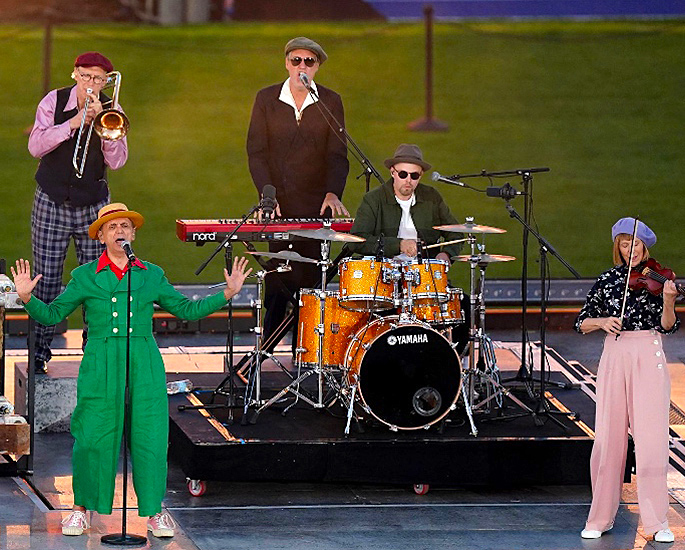 The ceremony took viewers through an interesting musical journey of the city.

The main set was insightful, particularly of the post-World War II effects, following into the industrial period. The latter included the factory line workers, manufacturing and so much more.

Thereafter, several key acts were performed in a very carnival-style setting. The closing ceremony was a good attempt to highlight the rich heritage and culture of UK’s second biggest city.

The event covering all the different decades began with the 80s. This includes Dexys Midnight Runners, entering the fray with the 1982 hit single ‘Come on Eileen’.

Fifteen minutes to nine saw the gradual arrival of all the athletes, representing seventy-two Commonwealth states.

On next was Musical Youth, a Birmingham-based Jamaican reggae band, which came into existence in 1979. They made an appearance on the left side of the stage, performing ‘Pass the Dutchie.’

The emergence of UB40 was next, with their 1983 best-selling song, ‘Red Red Wine’ from the album Labour of Love.

The band name took inspiration from the Unemployment Benefit Form no.40. The Birmingham 2022 Commonwealth Games official anthem was also a UB40 song, ‘Champion’.

The 90s reflection saw ‘Mundia Toh Bach Ke’ by Punjabi MC from Legalised (2003) playing. This Bhangra chartbuster made it into the UK top 10.

This song had a generation focus, reflecting a cultural fact familiar as the ‘Day Timers.’ This was when British Asian went to nightclubs in the daytime.

This craze made it possible for young teenagers to go clubbing. This is because their traditional families did not permit them to visit nightclubs in the evening.

The Lions of Punjab, a Midlands-formed Bhangra Dance Group had come on stage to perform “Mundia Toh Bach Ke.’ 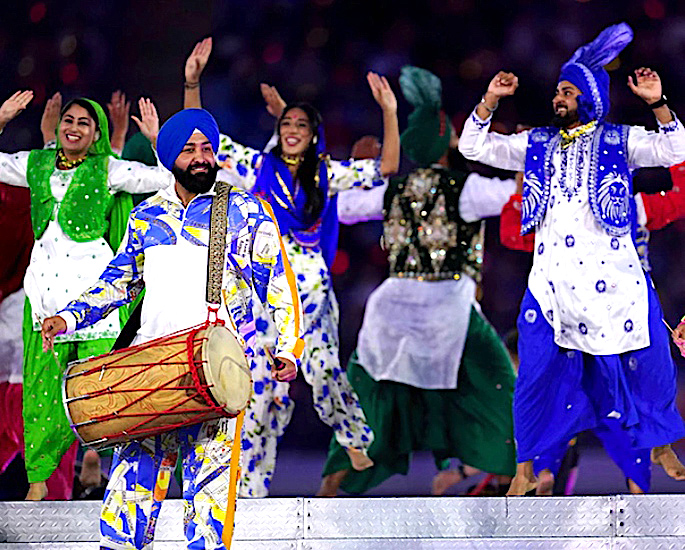 Ridaa Husain, Founder of Dance Bhangra, a Solihull-based Bhangra academy danced with The Lions. Ridaa of Pakistani heritage exclusively spoke to us about performing in front of a full house, saying:

“It was such an amazing and surreal experience performing in my hometown at a huge and prestigious event with the legend Punjabi MC.

“The energy in the stadium was amazing and I loved every second of it!”

It was a little strange though why other Bhangra bands did not come into the equation for closing night.

Then Walsall star Goldie and Beverly Knight from Birmingham came together for a scintillating performance of ‘Inner Life.’ 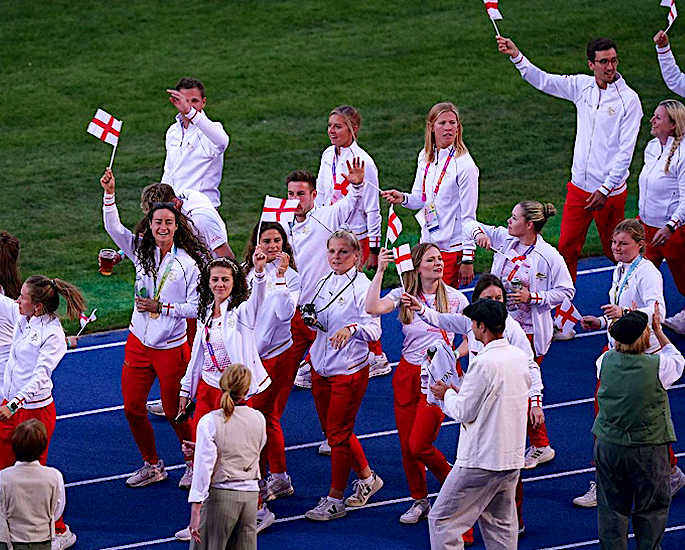 In line with the celebrations of the West Midlands area, there was a massive cheer when Team England made their way on the track.

England came second with 167 medals, including 57 gold, 66 silver and 53 bronze. Only Australia with 178 medals, were ahead of them.

A special mention also goes to Mandhir Kooner (ENG), the only British Asian to win a medal. The Wolverhampton-born had gone on to receive a bronze in the men’s 125 kg category.

Many of the athletes from Canada who had taken part in the Games came walking onto the green turf next.

The Canadians had a total of 90 medals, including 26 gold, 32 silver and 34 bronze, placing them behind England.

The Desi community will not forget the double celebrations of Amar Dhesi (125 kg) and Nishan Randhawa (97 kg), picking wrestling golds for Canada.

Kenya was next to follow on the grass field. They took 21 medals, 6 gold, 5 silver and 10 bronze, taking the thirteenth position. 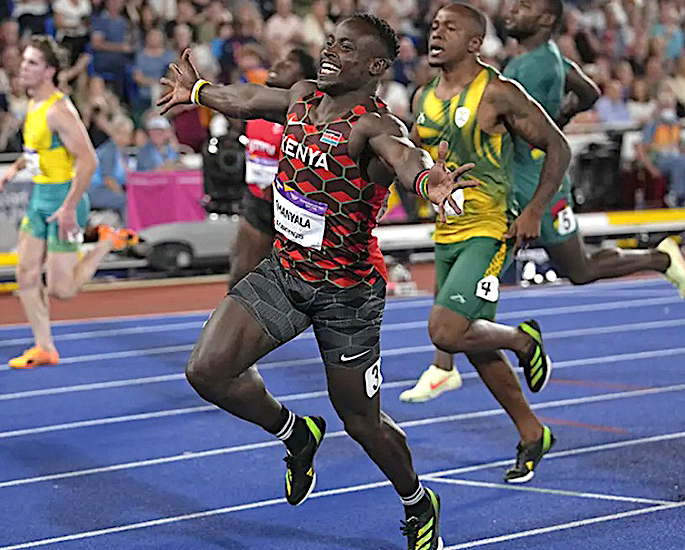 East African Asians will always remember Ferdinand Omanyala Omurwa racing to the line first in the 100 metres final. Such was his excitement that Ferdinand went running beyond the finishing line.

Talvinder Singh from Tooting, London who was not able to hold back on his emotions, exclusively expressed:

“I was jumping up in the air with joy. It was unreal and unforgettable.”

This gold medal was important as it shows that Kenya’s diversification in track and field is paying dividends.

The Kenyans have come to realise that they face tough competition in long distance running.

Hence, the alternative events are as exciting. Another example is Julius Yego, a javelin bronze medallist at Birmingham 2022, having previously taken gold in Glasgow 2014. 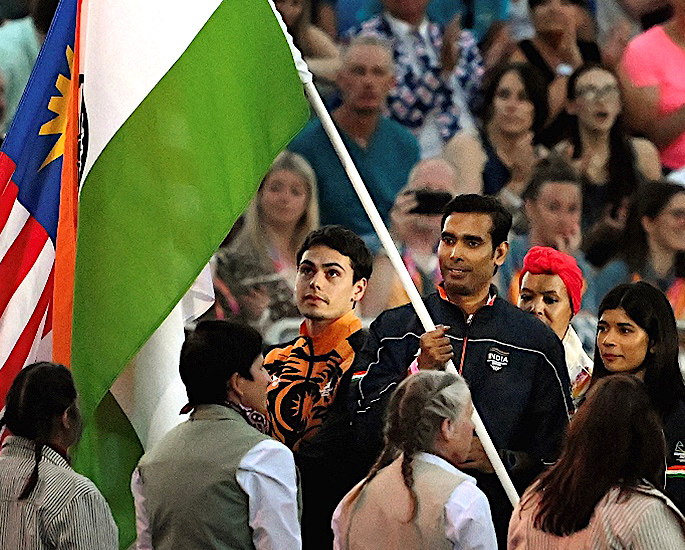 Bangladesh was the first South Asian team to walk on the green – be it only a few members.

They did not receive a single medal, which was not surprising as Bangladeshi journalist, Mohammad Jan-e-Alam had exclusively told us:

“With no shooting at the Games, Bangladesh had no realistic chance of a medal.”

A small contingent from India came through next, suggesting that some may have left for the capital or even home.

India with 61 in total had 5 fewer medals in comparison to Gold Coast 2018, receiving 22 gold, 16 silver and 23 bronze. They were fourth on the medals table.

Eldhose Paul becoming the first man from India to pick gold in the triple jump was a real treat for all Indian supporters.

Many fans were in awe of the women’s cricket team. Whilst they had a truly inspiring win against England in the semis, their valiant effort against the Austalia ended as a bit of a choke.

They almost had the final in the bag until there was collapse going into the last few overs.

Shortly afterwards the Green Shaheens of Pakistan made their walk-in with a fairly large contingent. Wrestling silver medallist Zaman Anwar (men’s 125 kg) was visible from afar.

Despite little support from back home and at the Games, they had 8 medals in total, with 2 gold, 3 silver and 3 bronze, leaving them in the eighteenth position.

Imagine what they can accomplish if they have true support. Well, if that becomes the case, they will win a lot more, ranking inside the top ten. 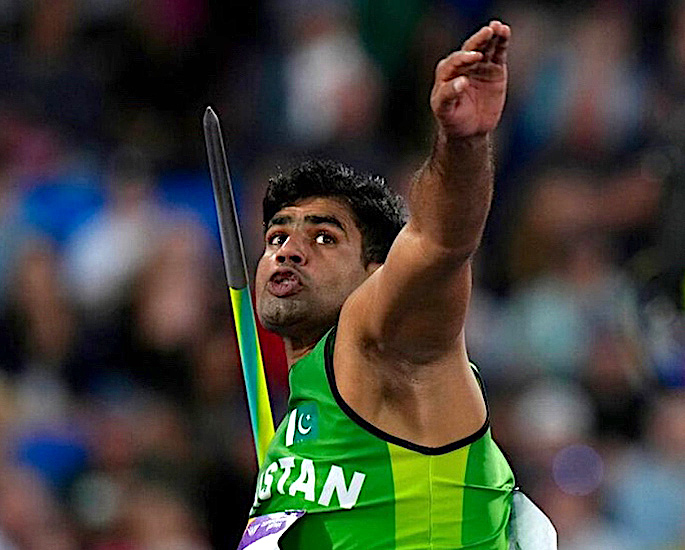 Arshad Nadeem “The Supreme”, smashing records on course to scripting history was one of the biggest talking points from a South Asian perspective.

Muhammad Adam who was in the stadium to watch the final stages of the javelin throw exclusively said:

“Arshad Nadeem concurred and he conquered.”

Muhammad Noor Dastgir Butt and his gold victory in weightlifting (men’s 125 + kg), with Games records, will also remain in the minds of many fans.

Members of the Pakistani contingent were dancing in full flow for most of the closing night.

Sri Lanka came on with ten members missing, possibly trying to stay in the UK with the unrest back home. The Islanders had a return of 4 medals, with 3 silver and 1 bronze, placing them in the thirty-first position on the final tally table.

Yupun Abeykoon crossing the line in third for a bronze (100 metres) will also have made everyone on the Island and elsewhere happy. 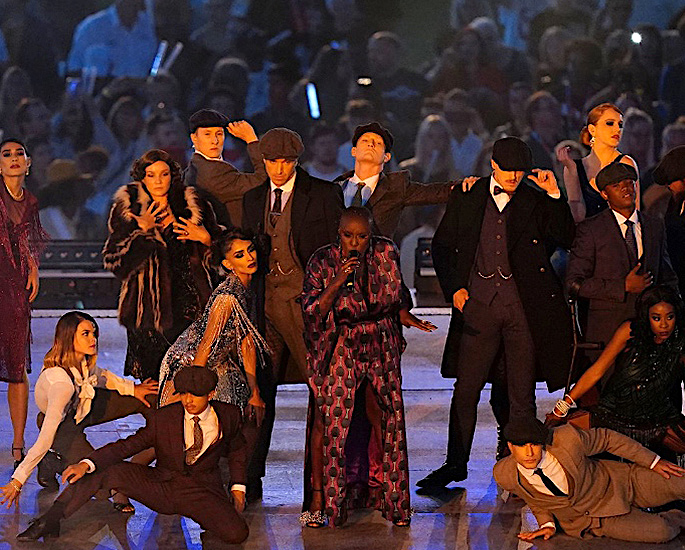 The night was full of dynamic tunes and dancing. From a contemporary perspective, spectators and television viewers also got to see Walsall-born Jorja Smith performing ‘On My Mind’ by Birmingham-origin heavy metal band Judas Priest.

Smith earlier made her presence felt, riding on a motorbike. Another stellar performance on the night included the 1979 Coventry-founded two-tone band, The Selector, with 150 dancers accompanying them.

There was also a tribute by Ballet Dance Company, Rambert to the popular long TV series, The Peaky Blinders (2013-2022). They performed ‘Red Right Hand’, which many will recall as the opening theme of the six-season show.

In addition, there was a tribute to Rum Runner, the once most expressive nightclub in Birmingham. The first-ever transgender contestant on Britain’s Next Top Model (20o5-2017), Tallulah-Eve Brown led the celebration.

Furthermore, the evening performance had an energising marathon song by Raza Hussain, Mahalia, Jaykae and Ash.

On the night vintage, black cars had also driven in the middle, amongst the music and performances.

The lighting effect throughout the night, the multi-colour wristbands amongst the crowd and the digital displaying of the flags gave a sense of passion and pride.

Chair of Birmingham 2022 Organising Committee Board, John Crabtree OBE made a strong speech.

He was thankful to the volunteers, athletes and the people of Birmingham. He said they all had a major contribution in making Birmingham 2022, a “Games for All.”

Fiang Tenwei (SGP) went on to collect the David Dixon Award for being the ‘Outstanding Athlete’ of the Commonwealth Games.

This was in recognition of her excellent gold-winning table tennis skills in the doubles, along with demonstrating sheer determination and fair play.

Following a fabulous performance from English-Nigerian creative Jacob Banks, the lowering of the Commonwealth took place. 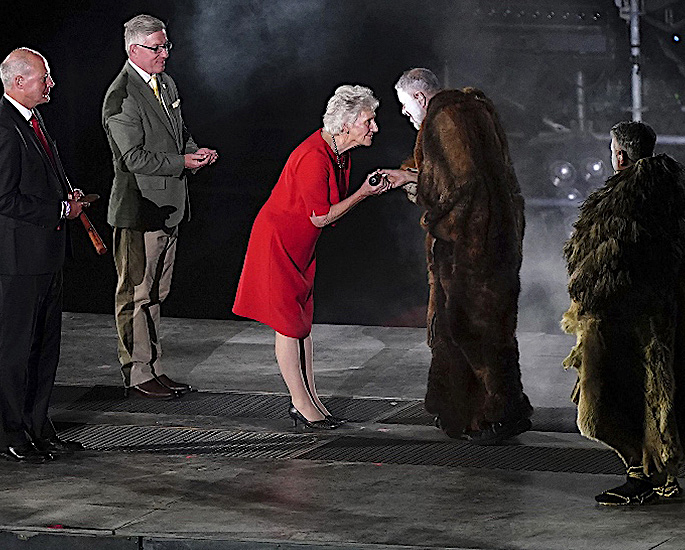 Then there was the flag handover to the Victoria 2026 Commonwealth Games, symbolising friendship through sport and youth.

On behalf of Her Majesty the Queen, the Earl of Wessex also said a few words to close the Birmingham 2022 Commonwealth Games

“You have once again brought the spirit and value of the commonwealth to life.”

“You have demonstrated what unites us, thank you Birmingham and the West Midlands.”

Finally, as a surprise package, the Prince of Darkness, Ozzy Osbourne came on stage for a showdown. The Aston, Birmingham-born grammy winning music legend had all the crowd positively shaking and moving.

And with that, it was the end of the Birmingham 2022 Commonwealth Games. As with any major event, there are always lessons to be learnt.

Many attendees of the closing ceremony also had complaints about the online ticket service.

However, many good memories will stay forever with us, especially the records and recognition of the sports people contesting in each discipline.

The legacy is also important, with the heart of the games being in Perry Barr, which has a vision for 2040. Adding Coventry and Warwick as venues was also a great decision.