“Why you been saying nasty things about me?”

Outraged fans have called for Azealia Banks’s Twitter account to be shut down after the American rapper launched into a hateful Twitter tirade against former One Directioner, Zayn Malik.

She made a series of racial slurs and used offensive language, labelling Zayn a ‘curry-scented b**ch’ and saying ‘Imma start calling you Punjab you dirty b**ch’.

Shocking racist insults were also thrown at the British Asian singer’s mother, whom Azealia branded as ‘a dirty refugee who won’t be granted asylum’.

The 24-year-old rapper then scathingly referred to Zayn’s role in One Direction as a ‘token brown boy’ – dismissing his musical talents, while implying the sole reason for his existence in the band was to attract a wider Asian audience:

“You were only apart of 1d to draw brown attention. You are and ALWAYS will be a TOKEN to the UK.” 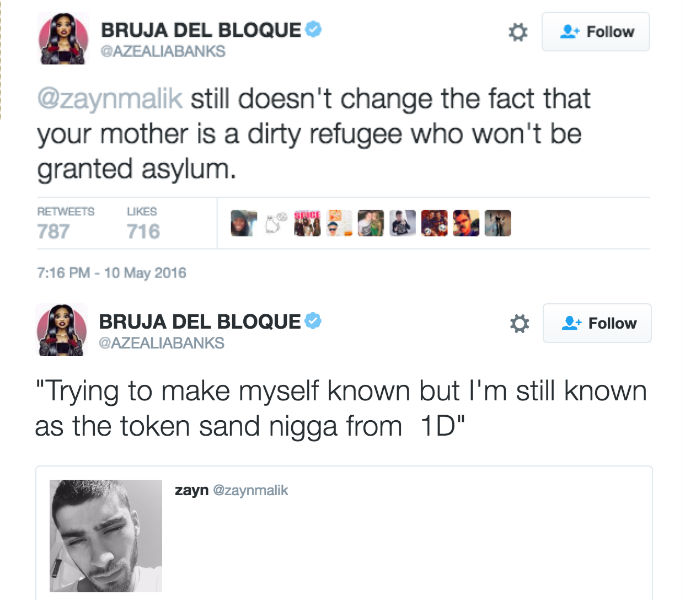 The hostility seemed to have begun subsequent to the release of Zayn’s new music video for ‘Like I Do’ on May 10, 2016. It has already collected more than 2 million views on YouTube.

Azealia suggested that Zayn had plagiarised her cinematic and style choices, and posted a comparison picture on her Instagram account indicating the similarities between ‘Like I Do’ and her own ‘Yung Rapunzel’ video.

In response to her accusations, Zayn addressed them in a pair of tweets, declaring that he ‘didn’t care’ and that ‘My @’s too good for you’.

An incensed Azealia then began hurling a torrent of racist and homophobic slurs at the Bradford-born singer, and to any Tweeters who objected to her vindictive cyber-attack. 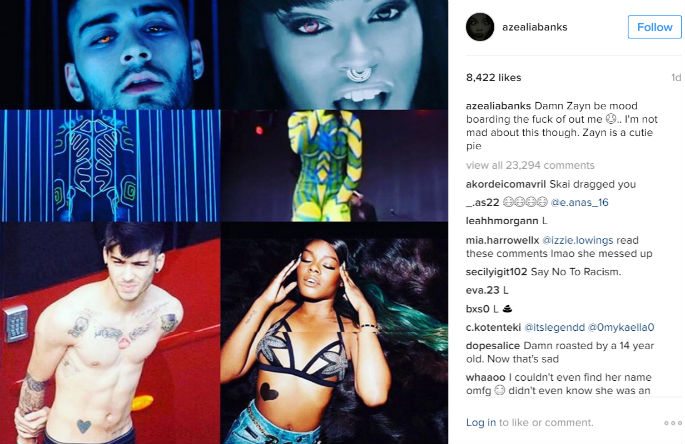 It is not the first time Zayn has borne the brunt of racial abuse on Twitter. In 2012, he retreated from social media after being the target of Anti-Muslim slurs. His last tweet before temporarily deactivating his Twitter account in 2012 read:

“The reason i don’t tweet as much as i use to, is because I’m sick of all the useless opinions and hate that I get daily goodbye twitter.”

The 23-year-old singer’s handling of the incident with Azealia, however, is admirable. Far from deleting his Twitter account, he coolly detaches himself from the situation with one simple tweet:

@AZEALIABANKS why you been saying nasty things about me ? I wasn’t talking about you lol ?

By remaining calm and refraining from stooping to the level of his aggressor, he sets a remarkable example for many Asians who may come under fire online as the victims of racist and abusive comments. 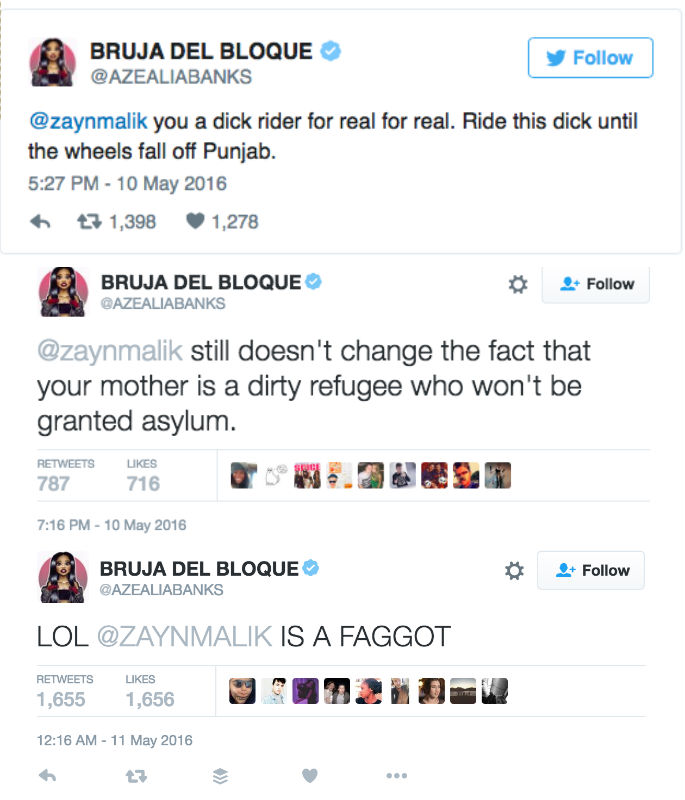 Zayn is from a half-Pakistani and half-English background and was born and raised in Bradford, Yorkshire.

At age 17, he auditioned as a solo artist for the X-Factor in 2010 but was eliminated before the final round. He was asked to return and perform alongside Niall Horan, Liam Payne, Harry Styles and Louis Tomlinson as part of boyband One Direction.

Having enjoyed five years of international success and immense popularity with the band, Zayn parted ways with them to pursue a solo career.

His following has since grown to include a more mature fan base. His unreleased work with British Asian music producer Shahid Khan, also known as Naughty Boy, as well as UK grime duo Krept & Konan, has helped the ex-One Direction star to build up a fresh urban audience in the UK.

Zayn’s debut solo album ‘Mind of Mine’ charted at Number 1 on both the Official UK Album Chart and the Billboard 200 Albums Chart.

He is the only male UK solo artist to debut at Number 1 in the US with his first album.

Despite his monumental success and worldwide fame, the British Asian superstar remains loyal to his roots.

He is an official ambassador of the British Asian Trust, contributing to improving the lives of disadvantaged people living in South Asia, as well as various other charitable causes. 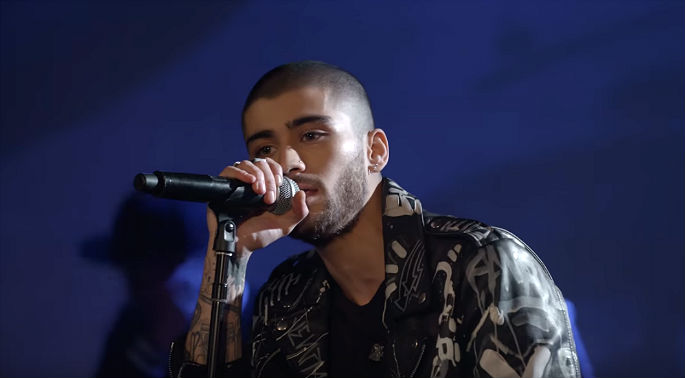 Azealia’s Twitter account is still up and running, but most of her derogatory tweets targeting Zayn have now been removed.

Racism and homophobia of this calibre is hardly disputable, so it is encouraging to see the social media giant taking action to punish this type of behaviour in the digital world.

The American rapper has also been dropped by Rinse FM’s Born & Bred festival, implying in their announcement that the decision is made as a direct result of Azealia’s rant against Zayn.