Arjun Kapoor and Cast arrive in London for Mubarakan Shoot

Anil Kapoor, Arjun Kapoor, Ileana D’Cruz and Athiya Shetty are in London to film Mubarakan. Find out what they have to say about the Bollywood comedy.

"This film is one that British Asians can really connect with"

The on set press conference of upcoming Bollywood film, Mubarakan was held in Central London on Saturday 11th March.

The family comedy, set to release in July 2017, has an ensemble star cast of Anil Kapoor, Arjun Kapoor, Ileana D’Cruz and Athiya Shetty.

Mubarakan is directed by Anees Bazmee, who has directed comedy hits such as Welcome, No Entry and Ready.

The film marks the first time that uncle-nephew duo, Anil Kapoor and Arjun Kapoor, will be sharing the screen. For Arjun, working with Anil Kapoor was one of the reasons he chose to do Mubarakan.

At the special London press conference, Arjun mentions how he enjoyed acting alongside his uncle: “Someone who I look up to for many reasons – not just in terms of his work but the way he conducts himself and what he has achieved,” Arjun says.

However, despite having family on set, Anil adds how he remains “professional with all of the actors”:

“It’s not that Arjun is my nephew but we are all the characters on the set.” 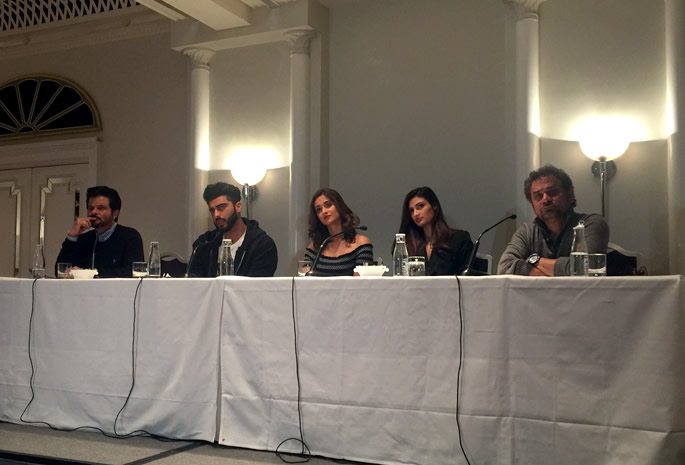 Another reason why Arjun Kapoor chose to do Mubarakan was because of the opportunity to do a double role:

“Aurangzeb was the first time I’d done a double role, so when it came to Mubarakan, it gave me a certain level of calmness. I knew what I needed to do as an actor to prepare and the time that it takes to pull it off,” Arjun tells us.

“It is a gift for an actor to do two characters in a film. I am getting to play a double role despite doing it once before so the faith that my director has of playing two characters gave me a lot of confidence and excitement.”

Whilst Anees Bazmee has worked with Anil Kapoor on three successful comedy films, this will be the first time he will be working with Arjun Kapoor. Arjun revealed how he has wanted to do a film with Anees ever since he assisted as a production runner for No Entry.

Arjun explains: “In a comedy there are so many ways to do a scene but there’s so much clarity in Anees’ mind so you know where to pick up from. In an ensemble comedy you need to make everyone realise what they are bringing to the scene. He deals with everyone on a one on one basis with what they are doing in the scene.

“All of his films have amazing characters beyond the main protagonist, which gives them an edge and makes it family orientated.”

Anil also revealed how he felt “most comfortable” doing comedy films with Anees: “These comedies are very real and situational.”

Whilst Anil Kapoor is a veteran when it comes to comedy, this is the first time that Athiya and Arjun will be divulging in this genre.

Arjun says: “I have never done comedy before on screen even though I do it off screen all the time! Here, I am being able to explore another side of mine as an actor. It’s not a genre many young actors take on, barring Varun.

“I have also never done such a big ensemble. It’s been great to work with two stunning ladies. The chaos that ensues is because of my characters are inherently in love with these girls and hopefully you guys will enjoy this madness called Mubarakan.”

A duration of 50 days has been scheduled for the Mubarakan UK shoot where around 85% of the film will be shot.

This has been both in Central London and in Home Counties such as Kent and Surrey. Anees says: “It has been great shooting in places that never been shot before with the suburbs.”

In Mubarakan, the lead cast play British Asian characters and Arjun believes: “This film is one that British Asians can really connect with.”

Listen to our Q&A with Arjun Kapoor about Mubarakan here:

Many of the actors and technicians involved in Mubarakan are, in fact, British Asian. Athiya Shetty reveals how this did not feel any different to an Indian cast: “Everybody has a great energy and works together really well. It’s a happy family on set and we’re having lots of fun.”

Anil Kapoor and Arjun Kapoor both play turbaned Sikhs in Mubarakan, so extensive shooting has been done in one of the largest Gurdwaras in the country, in Gravesend, Kent.

For Ileana, this was her first time inside a Gurdwara and she said: “I was really surprised when I saw the gurdwara in Gravesend – it was so massive and beautiful.”

Outside of the set, the star cast said that they indulged in a whole load of eating and shopping. Athiya revealed some of her favourite eating spots in London during this trip, which included Shake Shack and Sexy Fish.

Ileana laughs: “We shop so much to burn all those calories!”

Arjun also revealed how he has been spending time in London doing some retail therapy.

The ensemble comedy, Mubarakan is set to be a laugh riot with lot of confusion, laughter, and emotions. The film will be releasing on 28th July 2017.

DESIblitz wishes the team all the best as they continue to shoot the film in the UK.

Sonika is a full-time medical student, Bollywood enthusiast and lover of life. Her passions are dancing, travelling, radio presenting, writing, fashion and socialising! “Life isn’t measured by the number of breaths taken but by moments that take our breath away.”
How Kareena Kapoor is Redefining Pregnancy in Bollywood
Why Shahrukh Khan is More Than The King of Romance