Forty aspiring female football players from Chitral have arrived in Islamabad for a week of intensive training under an international coach.

"Usually when we do our activities, it’s kept secret"

Forty Pakistani female football players, all aged between 12 and 16, have arrived from Pakistan’s northern Chitral region to Islamabad’s Sports Complex.

The young players will attend a one-week intensive training camp, from Saturday, January 23 to Friday, January 29, 2021, under Coach Jose Alonso who runs a Spanish Football Academy in Islamabad.

These girls have been trained and encouraged to freely participate in sports, a distant reality for most Pakistani women.

The football players have been brought to Islamabad by the Chitral Women’s Sports Club, founded by 23-year-old national football star Karishma Ali.

Karishma Ali has represented Pakistan at international football tournaments, and in 2019 was selected for Forbes magazine’s 30 Under 30 Asia list of rising stars.

All the girls are aged between 8 and 16-years old and come from poor families in Chitral, a remote and mountainous area of Khyber Pakhtunkhwa, Pakistan.

The Chitral Women’s Sports Club allows them to freely practise many sports other than football, like volleyball and cricket.

Ali said: “These girls have talent. If we get requisite support, we can have 1,000 female footballers from Chitral.” 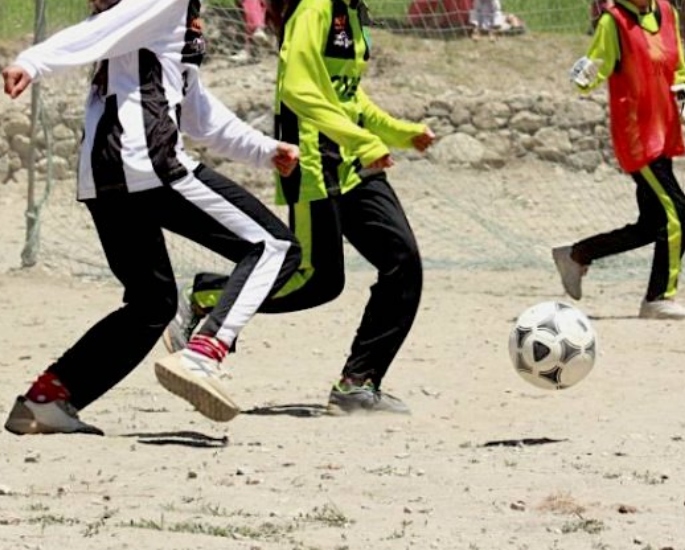 This is the first time away from home without their families for the young football players, as they are usually trained in Chitral.

However, during Covid-19, the training has proved difficult, but it did not stop Ali from pursuing her dream of helping aspiring female footballers in her native region.

The existing gender gap in Pakistan, especially in northern areas, does not help.

Speaking about the constraints Ali said:

“Usually when we do our activities, it’s kept secret and done far from their villages for security reasons,

“This is why I brought them here to give them a more comfortable environment.

“You can already see the change in their confidence, how they are playing out in the open versus at home.”

“We do not get opportunities like this back home.

“Just having the chance to come and play every day has been really fun.”

“That’s what we lack the most: opportunities.”

Pakistan has its own women’s football team too, which faced a FIFA ban for its inactivity in 2013. The ban was lifted in 2017, but the team remained inoperative.

To revive the situation, in 2020, the Pakistan Football Federation started organising football camps.

Ali strongly feels. now it is time that people in Pakistani sports management begin to believe in women.