Amitabh Bachchan was in Saudi Arabia for the PSG vs Riyadh XI match, meeting the likes of Lionel Messi and Cristiano Ronaldo.

"Lucky them, they got to meet you."

Paris Saint-Germain took on Riyadh All-Star XI in a friendly match at the King Fahd International.

The match ended up being a thrilling encounter, with PSG winning 5-4.

Amitabh Bachchan attended the match as a chief guest and accompanied dignitaries to greet the two teams ahead of the match.

In a video, he was seen shaking hands with Neymar and Kylian Mbappe.

The Bollywood icon also had brief conversations with Lionel Messi and Cristiano Ronaldo.

“An evening in Riyadh… What an evening… Cristiano Ronaldo, Lionel Messi, [Kylian] Mbappe, and Neymar are all playing together.

“And, yours truly invited guest to inaugurate the game. PSG vs Riyadh seasons. Incredible!”

Amitabh also shared pictures from his time at the match.

One picture featured the actor posing with the captains and match officials before the game. Another showed Big B speaking to Cristiano Ronaldo, who recently signed for Saudi side Al-Nassr.

In reaction to his post, fellow celebrities expressed their excitement.

Replying to the post, Virat Kohli, who is a big Ronaldo fan, commented:

“Wow, just wow! Amazing, love it! What a beautiful experience. They got to meet you.”

Fans were equally surprised by Amitabh’s appearance, with many admitting they were perplexed and happy.

One said: “A once-in-a-lifetime achievement for you sir… meeting these legend’s who are God for millions of football fan’s all over the world… this is your biggest achievement ever… to meet Messi, Ronaldo, Neymar and Mbappe.” 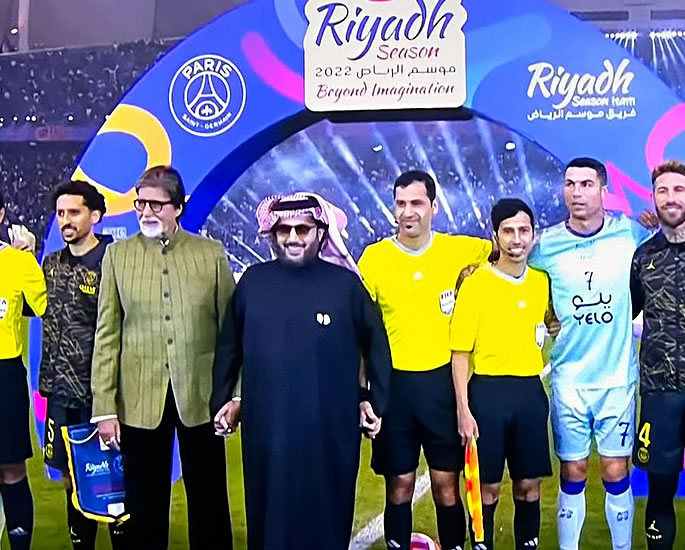 Others said Messi and Ronaldo were lucky to meet the actor.

A user said: “They are so lucky to witness you sir!”

Another agreed: “Lucky them, they got to meet you.”

A third person said: “Messi or Ronaldo could have generated a further 10 million IG followers had one of them touched Amitabh’s feet out of respect.”

Amitabh Bachchan also shared some pictures on his blog in which Abhishek Bachchan and Shweta Bachchan Nanda can be spotted accompanying him to the gulf nation.

Shweta also shared some photos from the match on her social media.

On the work front, Amitabh Bachchan was last seen in Uunchai.

Dhiren is a journalism graduate with a passion for gaming, watching films and sports. He also enjoys cooking from time to time. His motto is to “Live life one day at a time.”
Vinesh Phogat accuses WFI Chief of Sexually Harassing Wrestlers
22 Richest Football Players in the World