Indian paintings are famous because they reflect local traditions and customs. We explore seven types which define culture.

Some of the most famous paintings were created in caves.

There are various types of Indian paintings which showcase the tradition of the subcontinent. It is a practice which has gone on since ancient times.

Over time, Indian classical paintings have evolved to become a mixture of the various traditions which influence them.

Even the folk paintings of India has become fairly popular among art enthusiasts, both at the national as well as the international level.

A lot of the folk paintings feature a heavy influence of the local customs and traditions within India.

Some which are a testimony to this fact is the intricate murals in Ajanta and Ellora as well as Buddhist palm leaf manuscripts.

Records have been found that indicate that these types of paintings have been used to decorate doorways and guest rooms.

Some traditional paintings within the Ajanta caves depict a love for nature and its forces.

All painting types, however, define the rich history and culture of India and we look at seven in more detail. 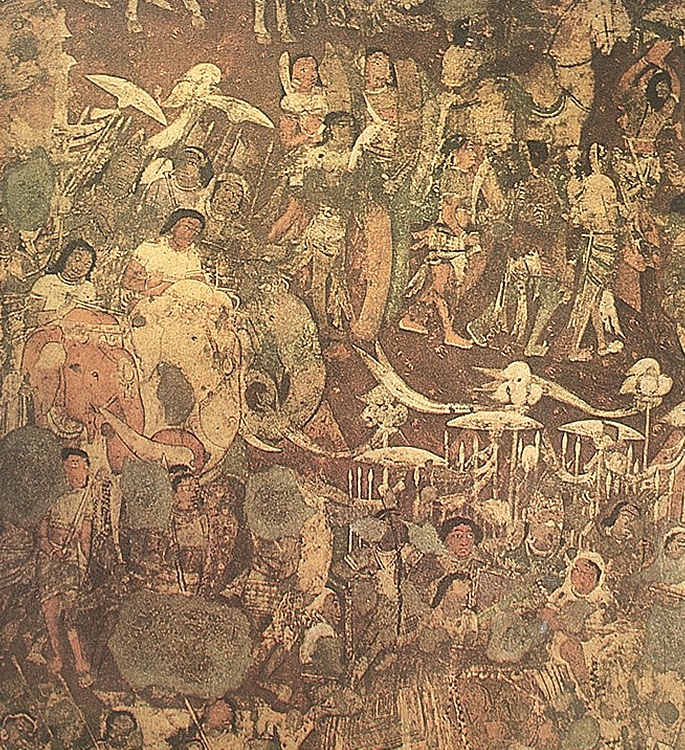 Cave paintings in India date back to the prehistoric times and almost all of them have managed to survive the test of time.

This is because very few buildings survived. Although they featured a lot of artwork, the work has been lost.

It is believed that cave paintings in India began around 30,000 BCE in the caves of Central India.

While India has a wide spectrum of culture, most cave paintings were inspired by naturalism. 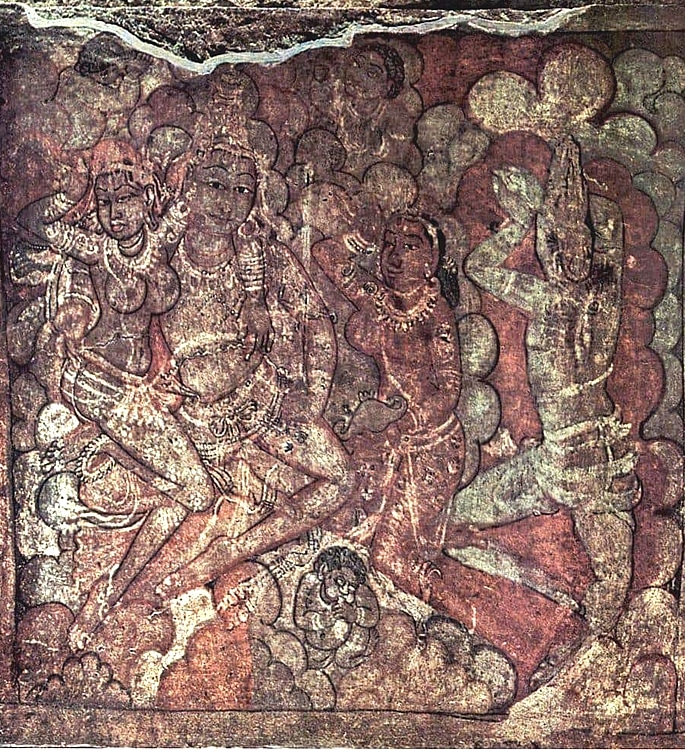 Some of the most famous paintings were created in caves. Two of the most well-known locations are the Ajanta and Ellora caves.

Indian paintings in Ajanta mainly depicted the life of Buddha in various decorative forms. The Ellora caves highlighted an array of Indian deities and their supremacy.

Cave paintings define culture as they act as a window to our ancestors, who used to live in the caves and decorated them. 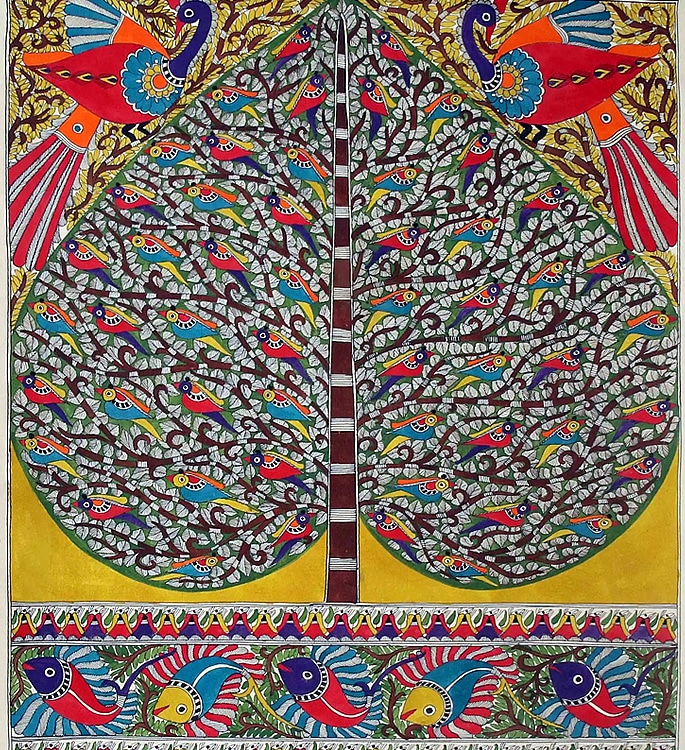 One of the most famous Indian art forms is Madhubani. It originated in Maithili village in Bihar.

Traditionally, the women of the village painted on the walls of their home to illustrate their thoughts, hopes and dreams.

This type of painting does not use typical paints. Instead, the colours are usually derived from plants and natural sources. Twigs, matchsticks and fingers are also preferred to contemporary paint brushes.

Over time, this art form has become a part of special festivities such as weddings. 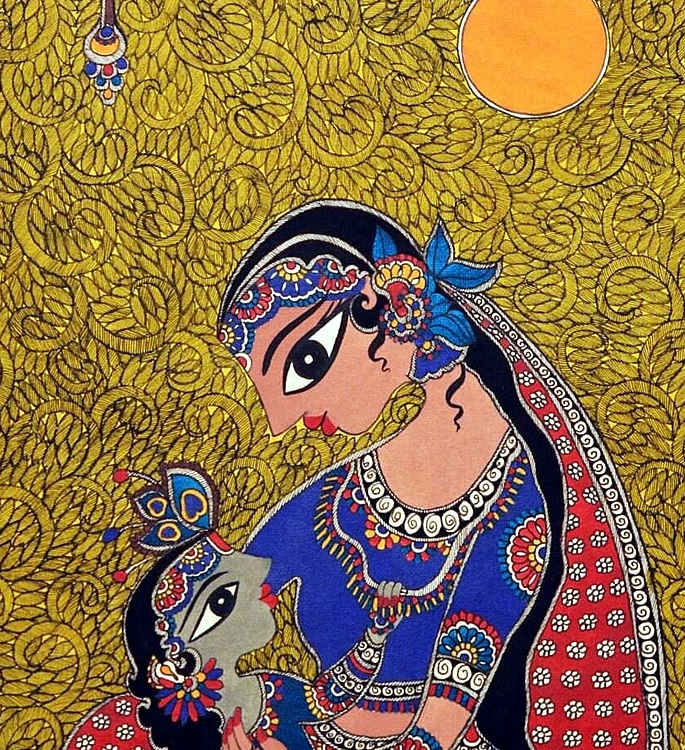 It has also become more internationally recognised as contemporary Indian artists took it on the global stage.

Madhubani paintings used to be painted on mud walls but they are now created on paper, cloth and canvas.

While it is a culturally defining type of Indian painting, the themes and style hardly change as these paintings are usually created within a limited geographical range. 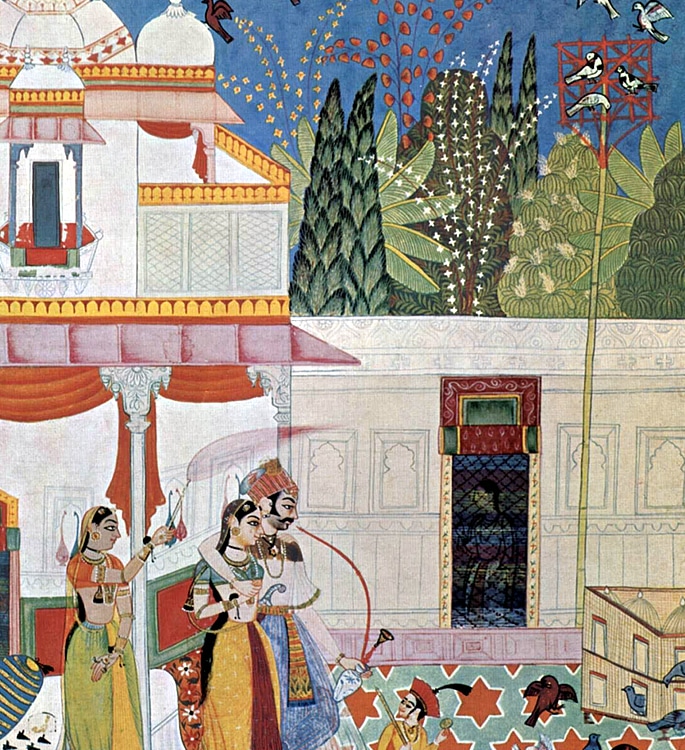 Miniature paintings originated in India approximately 750 AD and as the name suggests, they are very small in size.

However, they are colourful and the intricate brushwork makes it a unique and outstanding type of Indian painting.

The colours used come from a number of natural sources such as vegetables, gold and silver.

Miniature paintings tend to convey specific themes as opposed to other art forms. They usually depict a pattern of musical notes as well as mythological stories. 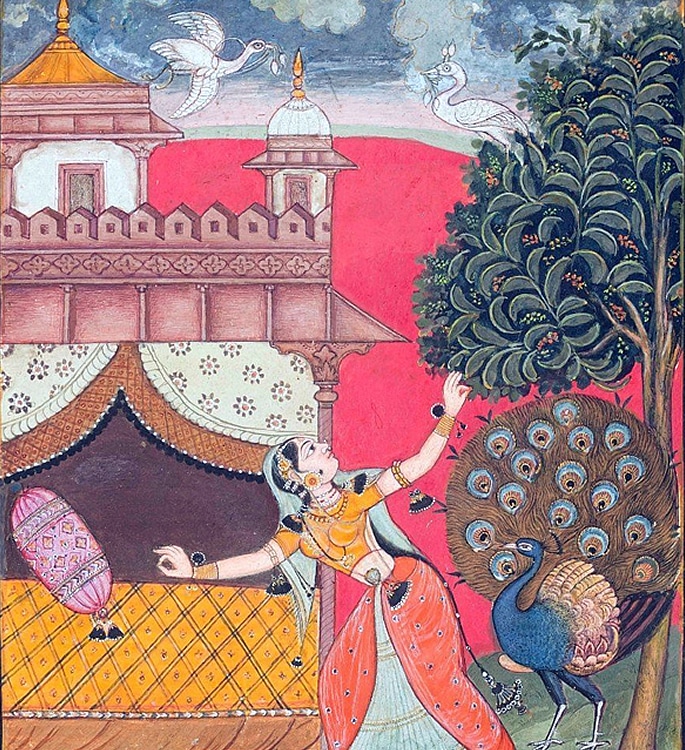 These themes changed slightly over time as different empires ruled. The popularity of miniature paintings grew significantly during the Mughal Empire.

Even after the decline of the Mughal Empire, the art type was patronised by the Rajput rulers of Rajasthan.

They had their own distinct features and usually showcased the lifestyle of kings and queens and also talked about their tales of bravery.

They are made especially for books or albums and the changing themes over time make it a type which defines Indian culture. 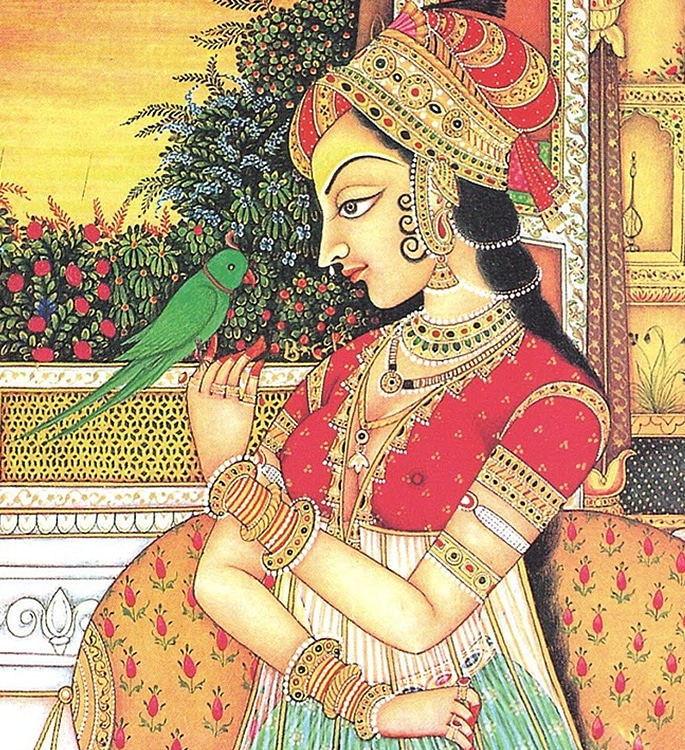 Mughal paintings originated during the Mughal Empire but it came about through miniature paintings.

Miniature paintings began to move away from the traditional style of Persian art and this resulted in Mughal paintings being born.

It became extremely popular and it quickly developed during the reign of Akbar as he encouraged and supported art.

He ordered the creation of many paintings and also paid close attention to the final touches of every piece of art. Akbar was very particular about the fine details and the artistic elements involved. 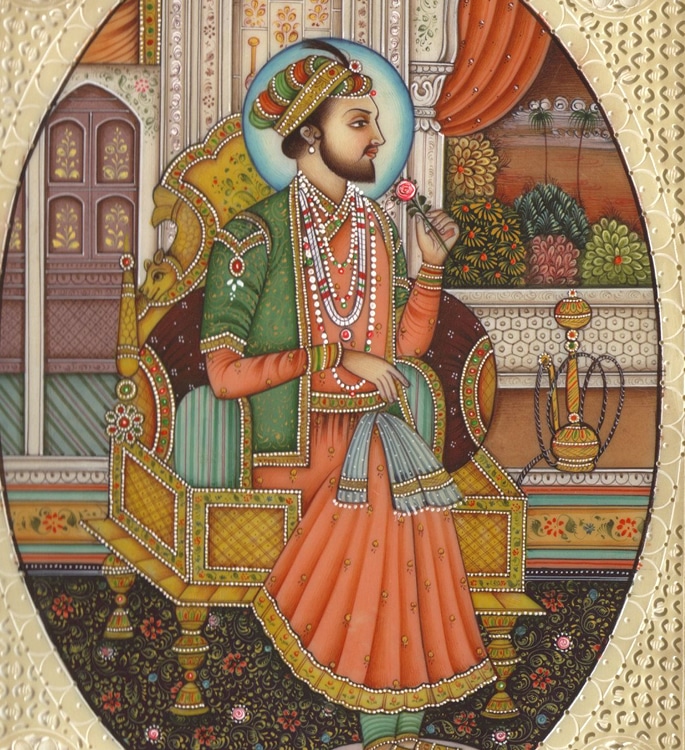 The paintings became an important way of narrating the tall tales of the Mughal emperors over time.

It is an art type which is still recognised today as there is a large collection of Mughal paintings in The Victoria and Albert Museum in London.

The Mughals were one of the most famous dynasties in Indian history and their life led to the creation of an Indian painting type. 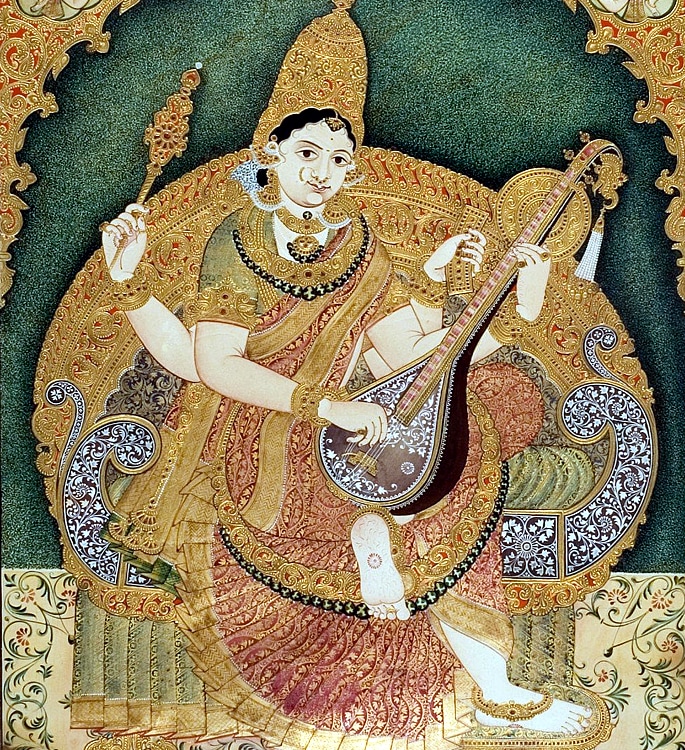 Mysore paintings are a type of classic South Indian art which originated in Mysore, Karnataka.

The style of painting is similar to the Tanjore paintings but Mysore makes use of thinner gold leaves and requires a detailed process to be followed.

There are a number of steps and each painting begins with paper pulp which is dried in the sun. Figures were gradually painted in detail. Each step creates an almost layered effect. 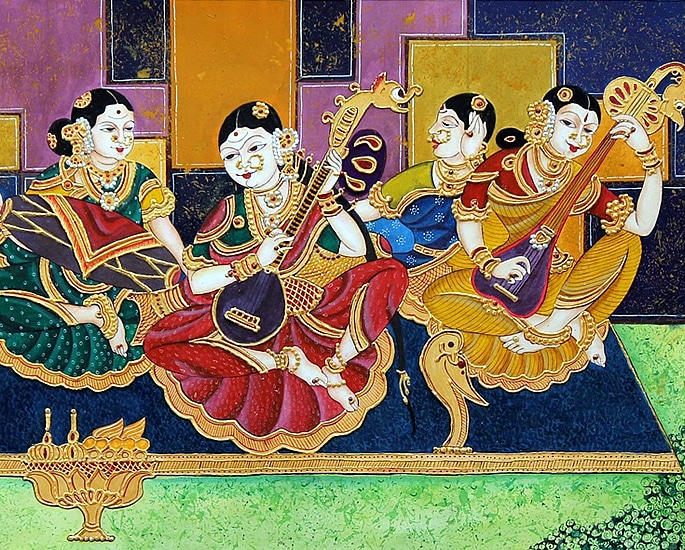 Mysore paintings are characterised by delicate lines, detailed brush strokes, the use of bright colours and luxurious gold leaf.

The paintings are designed to make the viewer feel devotion and humility as they look at the mesmerising artwork.

Deities and mythology were the most popular themes depicted in these paintings.

The Mysore School of painting became very popular under the rule of Raja Krishna Raja Wodeyar. He revived the ancient traditions of the city by depicting music, sculpture, dancing and literature within the art form.

The range of themes highlights the vast culture that India has to offer. 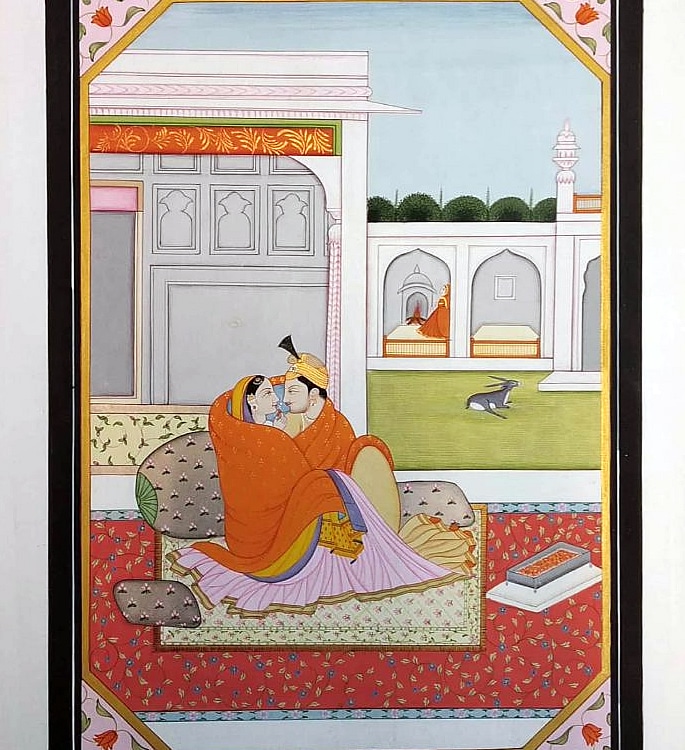 Pahari paintings are a type of Indian painting which originated in the Himalayan hill kingdoms of North India.

They have been widely influenced by the Rajput paintings because of the family relations of the Pahari Rajas with the royal court of Rajasthan.

These paintings developed and thrived between the 17th and 19th century. Indian Pahari paintings have mostly been created in miniature form.

They explored themes such as traditional folk songs as well as epic stories but they also depicted love and devotion. 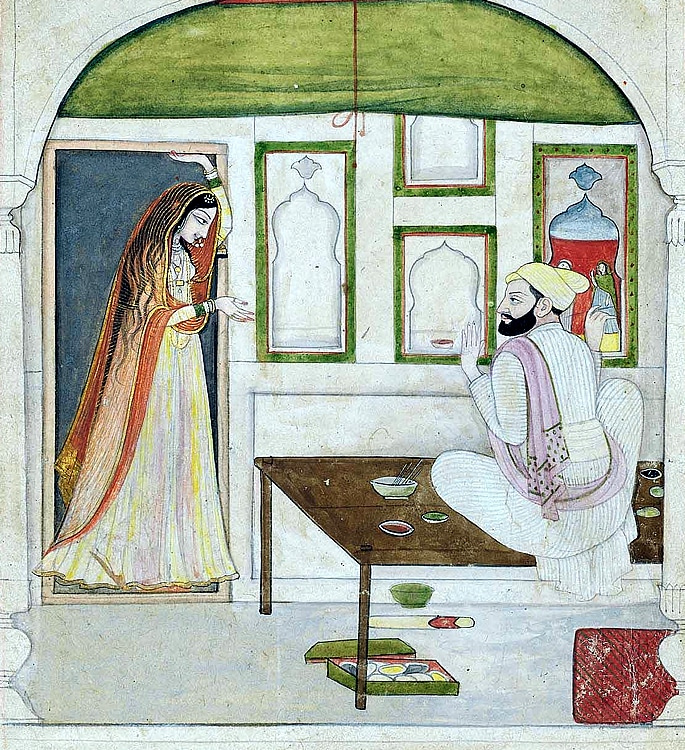 While most Indian painting types have one style, Pahari paintings can be split into two distinct categories based on their geographical range.

There were Kangra paintings and there were Basohli paintings which originated in Basohli in Jammu and Kashmir.

Basohli paintings were identified by their use of bold and intense colours as well as geometric patterns.

Kangra paintings were more delicate and displayed the elegance and grace of the Indian women. It was a style that became synonymous with Pahari paintings until others began to develop.

One of the most recognised types of Indian paintings is Tanjore. They are especially popular within South India. It is the native art form of Thanjavur in Tamil Nadu.

They originated during the 16th century under the reign of the Cholas.

Rulers within the community also patronised Indian Tanjore paintings between the 16th and 18th century.

Like the Mysore paintings, there are a number of steps to create a Tanjore painting.

They are distinguished by their dense composition, surface richness and vibrant colours. 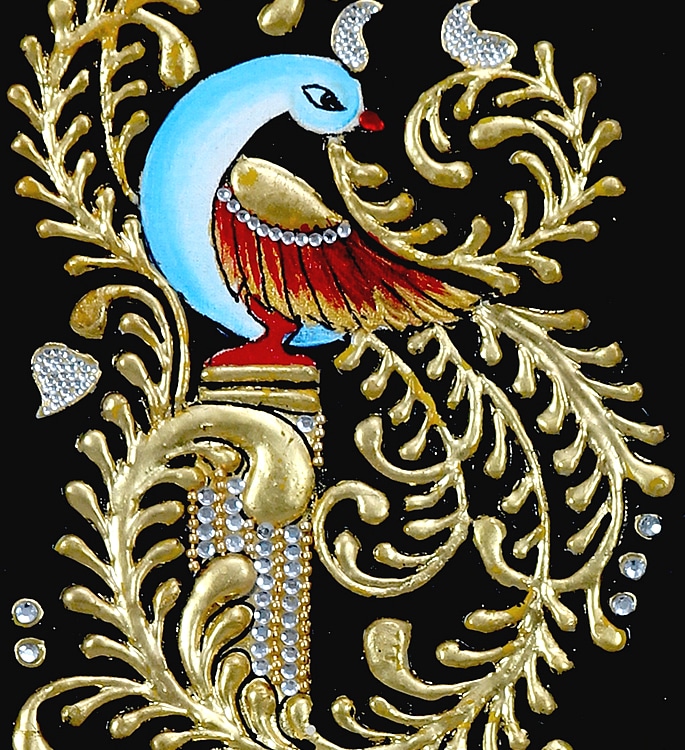 Each painting is finished with semi-precious stones, pearls and glass pieces. Not only do the paintings become unique but they also become more appealing.

The inclusion of stones and thin sheets of gold gives each painting a three-dimensional effect.

Almost all Tanjore paintings depict deities and are always painted in the centre of the painting.

Tanjore paintings are mainly created on wooden planks, they are therefore known locally as ‘Palagai Padam’.

While there are other types of Indian paintings, these seven are some of the best when representing Indian culture.

Many of these types have been around for hundreds of years and are still prominent today.

They act as a way of showcasing and preserving India’s diverse culture. These painting types also present an alternate way of educating others about various cultural aspects.

The uniqueness of these seven types of paintings provides new ways of defining Indian culture.

Dhiren is a journalism graduate with a passion for gaming, watching films and sports. He also enjoys cooking from time to time. His motto is to “Live life one day at a time.”
ZEE Jaipur Literature Festival 2019 at British Library
Venice Preserved: Sex, Tragedy and Rocky Politics