A 19-year-old British Asian named Akshay Ruparelia is one of the UK’s youngest millionaires, with an online estate agency that he set up while at school!

"I've always had an entrepreneurial spirit and ambition."

A 19-year-old British Asian teenager has landed a remarkable achievement as he becomes one of the UK’s youngest millionaires!

Akshay Ruparelia earned this title when his successful business was valued at £12 million. Just over a year after it began, which he set up while studying at school.

Quickly gathering success, it now stands as the 18th biggest estate agent in the UK. An outstanding achievement considering the teenager set up the business whilst still in education. But what prompted him to take on this impressive venture?

Speaking to the Daily Mirror, he explains his interest in business grew from an early age: “I’ve always had an entrepreneurial spirit and ambition, whether it was selling sweets at school when I was 12 or 13, or something else”

For his first company, he took inspiration from the business model of Ryanair, saying:

“Mr O’Leary began by selling flights for just £4.99. His point was that if you can offer customers something at a price they can’t believe and you deliver what you say you will, you hook people in and your business will work.”

With this in mind, the 19-year-old applied it into real estate. Believing that he could offer lower prices for properties, he began to set up Doorsteps.co.uk. However, he only started with £7,000 and borrowed additional money from relatives. 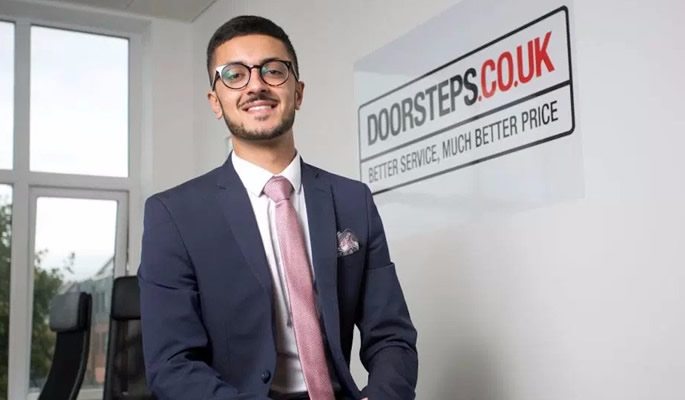 “I got the website up and running and after a couple of weeks a man in Sussex asked me to sell his home and a separate chunk of land he owned beside it [sic]. I had to pay my sister’s boyfriend £40 to drive me to Sussex to take photographs of the house. I hadn’t passed my driving test and didn’t have a car.”

Akshay revealed he placed the five-bedroom house for £485,000 and its land (that contained a swimming pool) for £185,000. He added: “I’d sold it within three weeks.” However, he could revel in the thrill of his first sale, as he needed to revise for exams.

Now, he employs 12 people to help run his business. In addition, he hires a growing network of self-employed mothers, who show clients around properties instead of the high street chains’ usual business suit figures. The entrepreneur said:

“Quite rightly people trust mums. Every mum who works for me will be honest and tell the truth. It is important. For the majority of people selling their home is the biggest financial transaction of their lives.”

As he becomes one of the UK’s youngest millionaire, Akshay plans to continue with his business. Despite an offer at Oxford University for a degree in Economics and Management, he has put this on for hold.

Akshay also works on supporting his parents, who are both deaf, who he credits as motivation for his ambitions.