10 Most Dangerous Foods in the World

In modern day, the consumption of monkey brains is illegal

Most of us do not think of the danger when we are presented with exotic and luscious tasting food.

However, to the local people, the danger is not always a concern as they are used to consuming these foods and it is often part of their tradition.

Although, research has found substantial data on some of these dangerous foods. Concluding as poisonous and toxic to the point where they can lead to death.

Among them are certain seafood, plants and even cheese.

So, if you have a thing for danger, read on as DESIblitz brings to you, 10 most dangerous foods in the world. 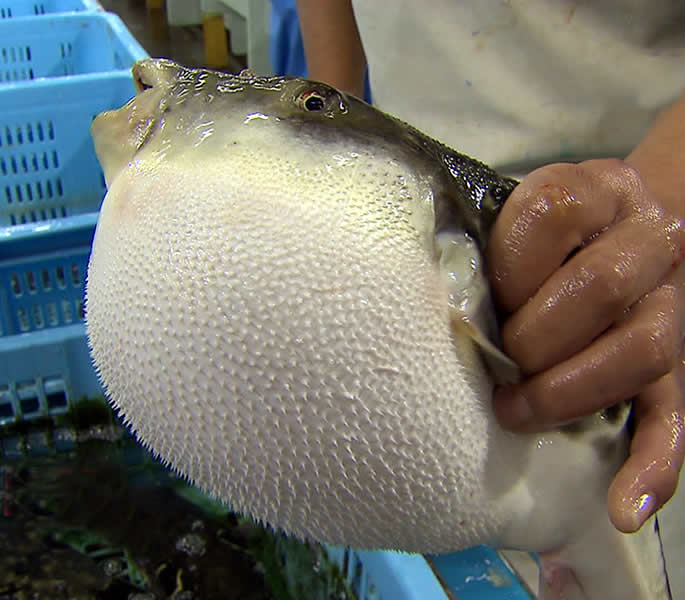 Fugu fish also called the Pufferfish or Blowfish, is poisonous and enjoyed as a delicacy in Japan. Pufferfish carry a toxin known as tetrodotoxin which is deadlier than cyanide.

This fish has the power to kill up to 30 people in one go with its deadly venom.

So why eat it? Well, fugu fish has been eaten through generations all over Japan early than the 15th century.

Fugu is more than a death wish, it said to be an experience and is served at luxury restaurants in Japan.

Chefs with only a license can prepare this dish and it takes up to 2 years to get a permit.

Which we would expect, as most of the fugu fish is covered in this deadly poison and many people die each year from consuming the fish.

Aside from being deadly, when cooked right, this fish can be used to make a multitude of fantastic dishes.

Such as Fugu Sashimi, Sumibiyaki Fugu and Fugu Shabu Shabu.

Watch the video of Fugu fish being prepared: 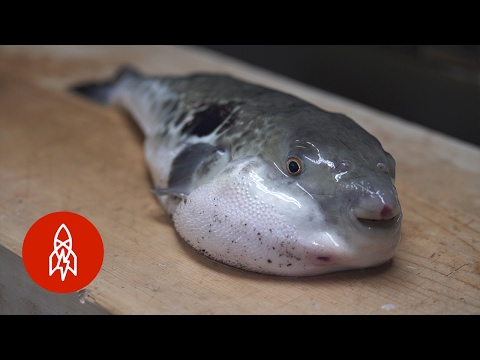 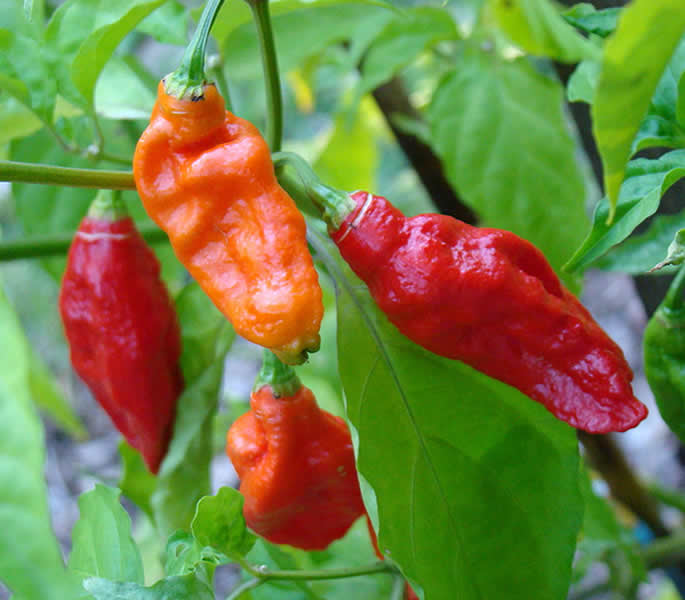 Considered one of the most dangerous chillies in the world and has earned the title ghost pepper. The bhut jolokia is also referred to as the naga morich and raja mircha.

We should warn you, this beloved South Asian chilli has been used in weaponry.

In 2010, the Indian military used the bhut jolokia to create a  grenade which makes this chilli dangerous.

Later, the ghost chilli took the internet by storm with the ‘ghost chilli challenge’ which is still trending on social media.

The challenge involves eating the whole chilli or eating snacks infused with the chilli. Such as the gummy bhut jolokia and ghost pepper hard candy.

In South Asia, the chilli is seen far from dangerous and has been used to make incredible dishes and chutneys. 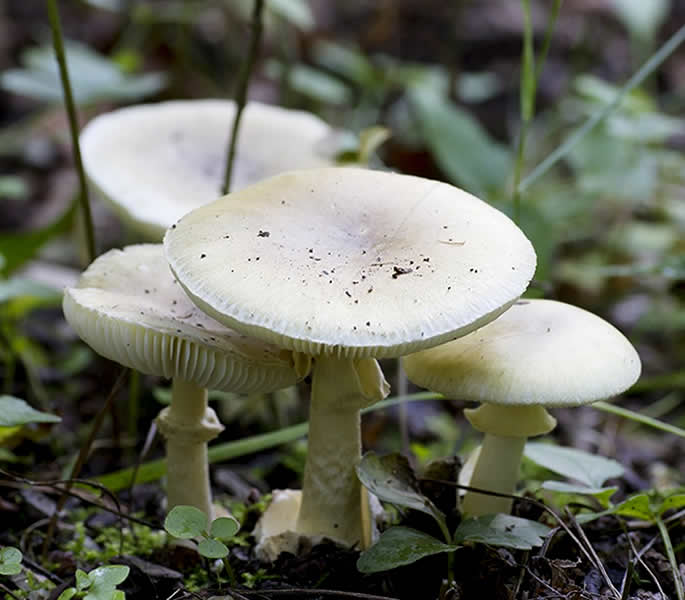 Who doesn’t love a side of grilled mushrooms for breakfast or even to add to their burger?

Mushrooms are probably among the trickiest to identify when it comes to dangerous foods. People often mistake certain wild mushrooms as edible.

Wild mushrooms require a specific environment to grow and are mostly found in places like the woodland. Some of the most dangerous wild mushrooms can be found in the UK.

According to Wild Food UK, the death cap is the most toxic mushroom in the UK.

Poison from the death cap mushroom attacks the body immediately after being consumed.

The poison is said to cause death over a number of days to even weeks without the individual knowing.

However, there is a range of non-killer wild mushrooms which can be used to make incredible dishes. Such as Caesar mushroom which is used in Italian pasta recipes. 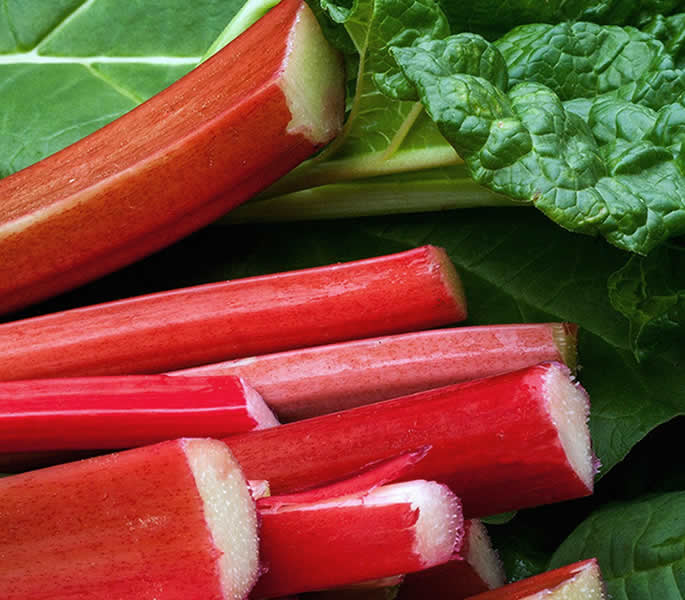 Rhubard is a popular plant used in Desi cooking, from chutneys to curry. In other countries, rhubarb is used in dessert making such as the old-school favourite; rhubarb and custard.

Restaurants in London are said to be notorious for bringing rhubarb to the menu as soon the season begins, which is usually in the new year.

We would not consider rhubarb a killer but it does carry many risks due to the dangerous contents which linger in the leaves of the plant.

Namely oxalic acid, which can reduce the function of the kidney causing an individual to have kidney failure. However, the concentration of oxalic acid is low and therefore is not enough to kill the consumer.

Furthermore, eating the leaves of the rhubarb can cause other uncomfortable symptoms.

According to Live Science, rhubarb leaves can create a ‘burning sensation’ in the mouth and for the worse, cause a person to fall into a coma.

However, aside from the dangerous leaves that pose a potential risk to the health. The stalk of the rhubarb is filled with various nutrition and can be used to make a variety of dishes. 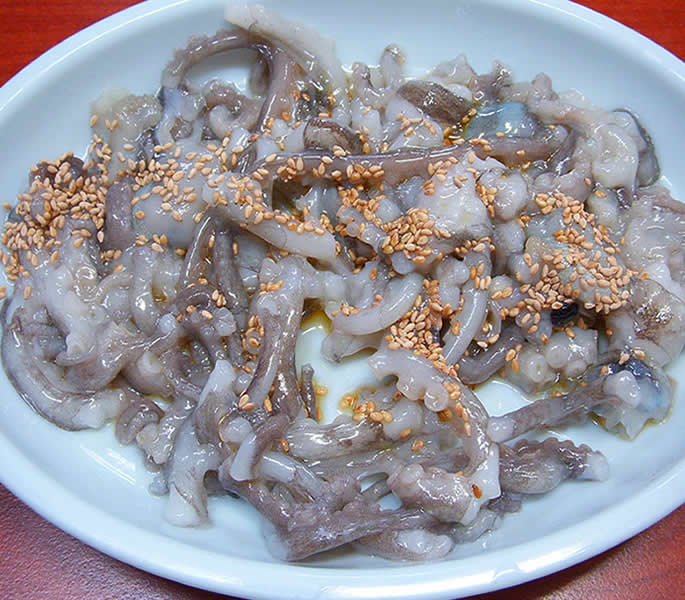 Eating a live octopus has been a long-running trend in South East Asia. Countries like Japan, Korea and China aim towards providing a different culinary experience.

Chefs serve up the ‘live octopus’ dish under a few minutes and give the diner a side of condiments to help elevate the dish.

This dish has drawn up a lot of controversies, some have viewed this as animal cruelty due to the cooking process.

Live seafood is the common way to serve dishes in South East Asia as it symbolises freshness.

One of the dangers of eating live octopus is the tentacles. It has been said, the tentacles of the octopus can get attached to the throat which can cause death.

It’s reported that up to 6 people have died in South Korea from eating live octopus.

Furthermore, a murder investigation was initiated after a woman died from eating a live octopus and her boyfriend was suspected of murder.

If that has made you slightly weary, grilled and slow-cooked octopuses are also on the menu and are trending.

Watch the video of live octopus being consumed: 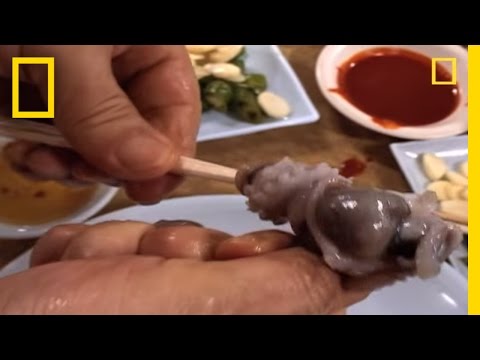 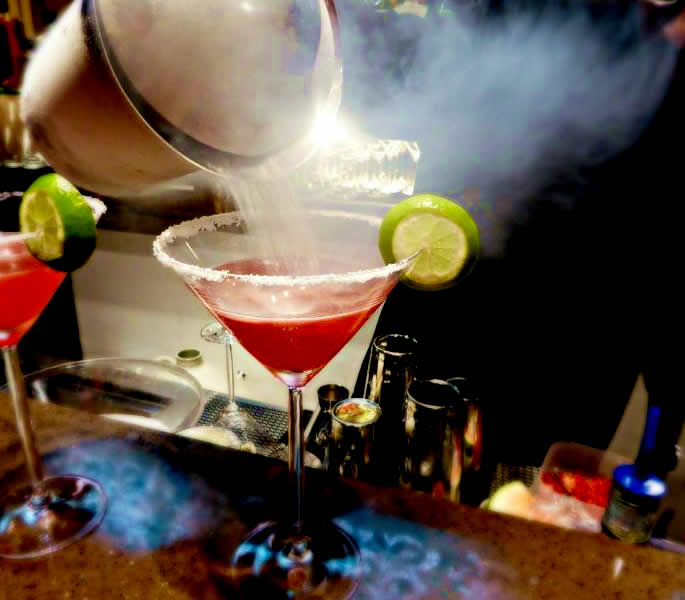 Many restaurants and bars have been incorporating liquid nitrogen into their drinks and dessert.

Liquid nitrogen has such a low boiling point that it is extremely cold in its liquid form. When used correctly, the liquid can provide added effects to the dessert or drink at hand.

A party trick almost unmissable as it is trending all over social media. Drinks and dessert are welcomed with white cloudy smoke.

However, when liquid nitrogen is mishandled, it can be dangerously harmful to the body. Especially if it is exposed to air which causes it to heat up.

Over the past years, there have been many reports relating to incidents caused by this drink. Bars and clubs with cheaper prices are not always equipped or trained to handle the chemical.

In 2017, a Delhi man ended up with a hole in his stomach after he drank a nitrogen-chilled cocktail in India.

He had to undergo major surgery where the damaged parts of his stomach needed to be removed.

In 2015, a 20-year-old was close to death after she consumed a liquid nitrogen cocktail. Surgeons had to remove her stomach to prevent her from dying. 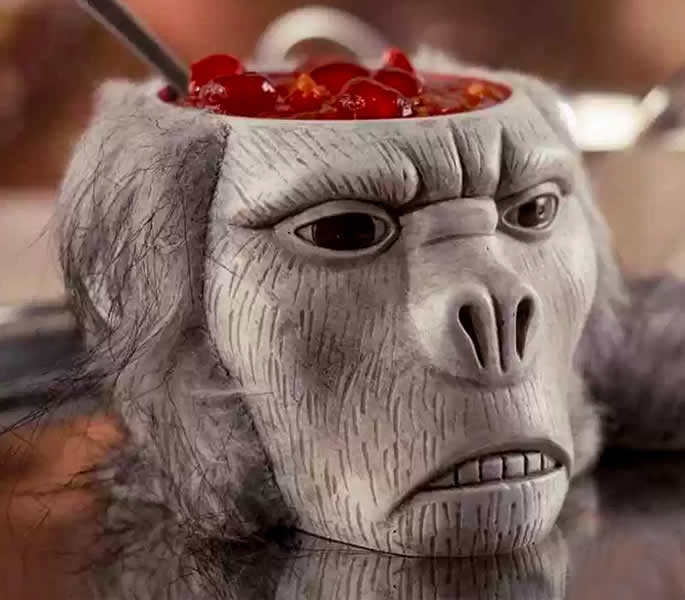 Monkey brains may come across as unusual and many of us would not consider them as food.

However, eating raw monkey brain from a live monkey was an expensive dish in China. People purchased it simply to prove they were of the wealthy.

In modern day, the consumption of monkey brains is illegal but restaurants in the Jiangxi province are said to still serve it.

People can contract numerous diseases such a rare type of illness known as the Variant Creutzfeldt-Jakob disease.

This disease is said to trigger multiple mental health conditions and eventually lead to death. 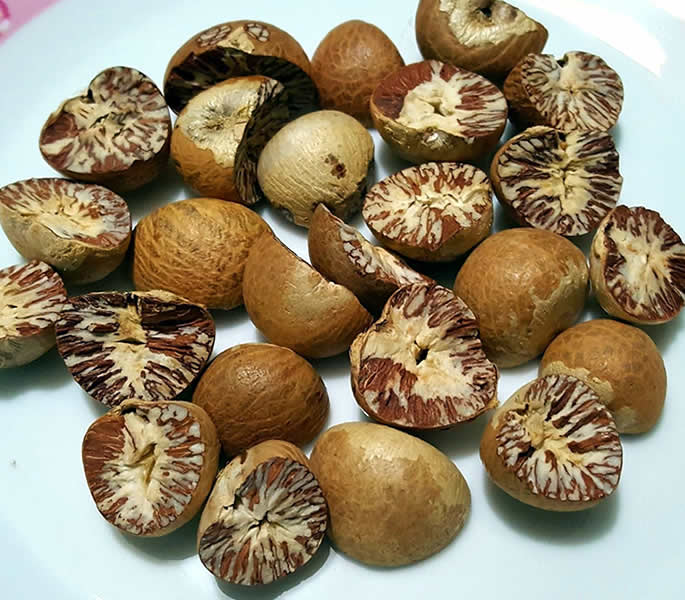 Areca nuts are favourite in most Desi nations are enjoyed with betel leaves and spices. Others like to cut the nut into smaller and thin pieces and chew it.

Recently, the invention of fire paan has been a must try across South Asia, in fact, this popular nut is brought to big events such as weddings and dinner parties.

Those who consume it are aware of the visible red stain it leaves behind on the lips and teeth.

Yet unknown to many, these addictive nuts carry life-threatening dangers. This includes oral cancer and tumours within the mouth which build over the years.

Gum disease is another cause of chewing the nut, as it destroys the tooth and weakens the gum. Dentists refer to this as ‘Periodontitis’ which can lead to loss of a tooth or more.

In 2012, a Taiwanese man noticed a hole developing on his cheek and shortly after, escalated into a tumour which made simple tasks such eating a challenge for him. 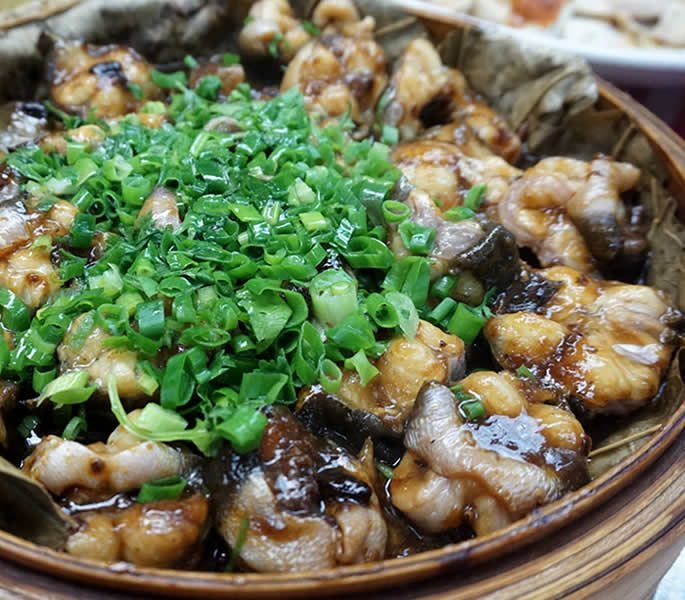 When it comes to cooking a snake, preparing a live snake is very risky even after it has been severed and decapitated.

In 2017, a chef was bitten by a cobra which he had beheaded 20 minutes before it attacked him.

It does sound impossible but it was the cause of the chef’s death due to the toxic venom.

After consumption, villagers were poisoned and needed immediate medical attention. Reports show a number of 60 people affected from the leftover venom present in the meat.

However, those directly eating snake meat are more likely to be affected by salmonella rather than snake venom itself. This is due to the harsh conditions snakes are found in a kept in. 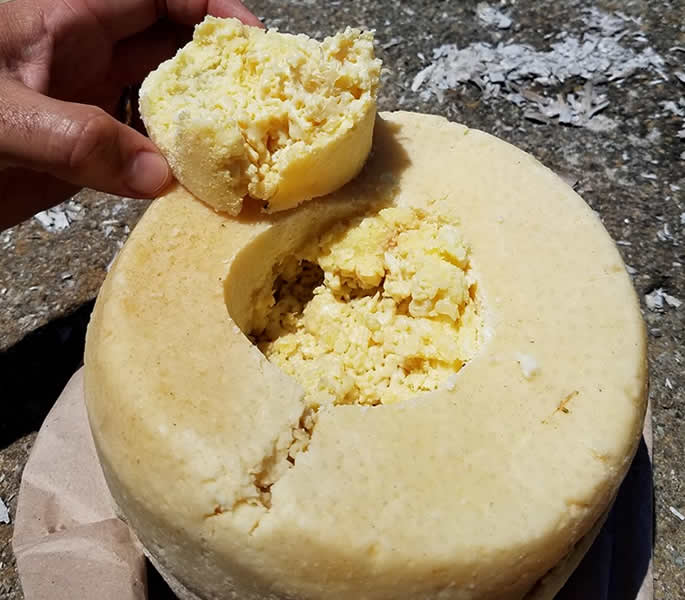 Casu marzu is considered as one of the most dangerous of cheeses. It is exclusively in Sardinia and originates from Sardinia.

This cheese is illegal in the UK and many countries due to how it is made.

The process of the cheese begins like most cheeses with milk; this particular cheese requires sheep’s milk.

Once the cheese has been made, it is left to be infested with eggs of flies which lead to the growth of maggots.

If maggots enter the human body, they can cause bacterial poisoning and cause infections.

Hence why it is very dangerous to consume this cheese and why it has been made illegal.

These are just some of the most dangerous foods in the world.

We hope you enjoyed our list and may be found something you have never heard of.

If you are feeling daring enough try some of these dangerous foods, always be sure to check out the risk before trying anything new.