Photos of the couple in front of the wonder in Agra were shared on Instagram and appeared to show Mahtani wearing a diamond ring.

The fashion designer wore a white T-shirt and floral skirt and held hands with her potential husband-to-be who wore a full white ensemble.

The images circulated on social media and netizens wondered if Jammwal had popped the question.

The news appeared to be confirmed when Neha Dhupia posted a screenshot of the couple on her Instagram story. 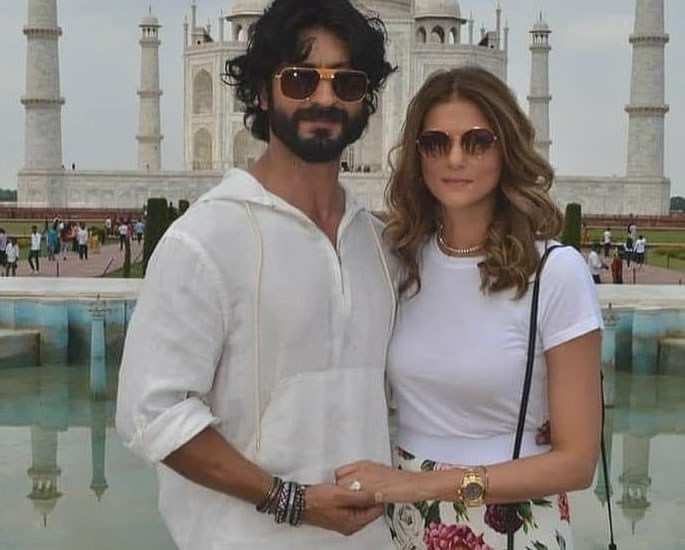 Jammwal and Mahtani first sparked dating rumours earlier in 2021 when he posted a picture of her while on a trek in January.

The suspicion only grew when she congratulated him on his upcoming project by sharing a photo of him on her Instagram account.

She captioned it: “Congratulations V! Success, love & good luck to you and team @actionherofilms.”

He replied: “Thank you Nandi baby.”

Mahtani is best known for being the stylist for Indian cricket team captain, Virat Kohli, and also runs a company called Playground along with Dino Morea.

She was the first wife of Delhi-based businessman Sanjay Kapoor.

Vidyut Jammwal had previously been in a relationship with fellow actress Mona Singh for two years but they broke up in 2014.

He is currently filming the action thriller Khuda Haafiz 2.

The first film featured his character travelling to the fictional city of Noman to rescue his wife from sex traffickers.

However, Jammwal is best known for his work in the 2013 action film Commando which saw him play the role of an Indian commando who is accused of being a spy.

In the movie, his character is incarcerated by the Chinese government after surviving a plane crash in their territory and is forced to find a way to escape.

The news of Mahtani and Jammwal getting engaged comes weeks after it was rumoured Katrina Kaif and Vicky Kaushal got engaged.

Although Harshvardhan Kapoor confirmed that the pair were in a relationship, it is unknown whether or not they are set to tie the knot.

Naina is a journalist interested in Scottish Asian news. She enjoys reading, karate and independent cinema. Her motto is "Live like others don't so you can live like others won't."
Sidharth Shukla’s Family release 1st Statement
Rajat Bedi booked for Hitting Man with Car