Arguably the most iconic landmark in India has seen a range of sculpture depictions. We look at some sculptures of the Taj Mahal using different materials.

The Taj Mahal is considered to be one of, if not India’s most iconic landmarks.

It was originally commissioned in 1632 by the Mughal emperor Shah Jahan to house the tomb of one of his wives, Mumtaz Mahal.

Construction in Agra was fully completed in 1653 and has since seen it become an essential part of Indian culture.

The Taj Mahal became a UNESCO World Heritage Site in 1983 for being “the jewel of Muslim art in India and one of the universally admired masterpieces of the world’s heritage.”

In that time many artists, both amateur and professional from all parts of the world have produced sculptures of the Taj Mahal.

They range from miniaturised to large depictions of the landmark.

What is intriguing is that these sculptures have been made using different materials, some of which are not typically used for sculpting.

We explore a number of sculptures made using different materials and the process to make them. 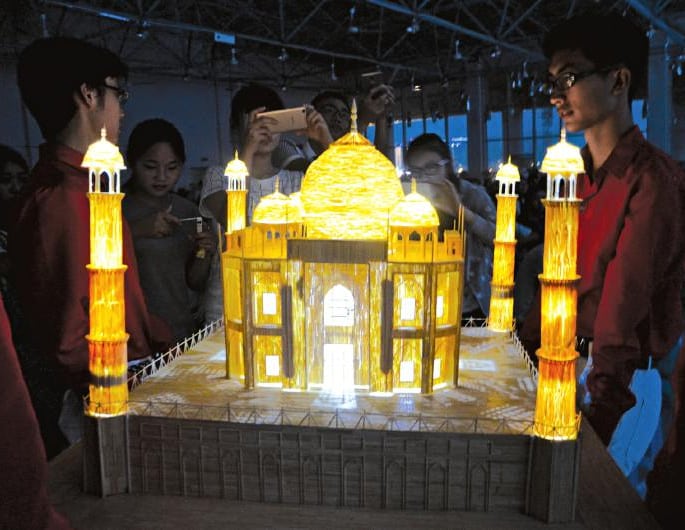 An unorthodox material to use to make a sculpture, but this is what a group of students used to recreate a stunning replica of the Taj Mahal in 2016.

Six students at Southwest Medical University in China used over 70,000 toothpicks for their piece of art.

It was their entry for a campus handicraft competition which won the first prize.

The toothpick Taj Mahal took ten full days to complete and began when the students bought the toothpicks online.

They used large plastic bottles for the base of the sculpture.

The complex architecture required a pair of pincers to bend the toothpicks into different shapes which were then glued on the bottles.

Constructing it came at a cost as their fingers were pricked and bled many times during their creation.

But it was worth the effort.

The University students added a light bulb inside their creation to make it more appealing.

Project leader Lei Jie has always had a fondness for construction.

He previously entered the competition in 2014 with a Taj Mahal made of chopsticks, he earned third place for his effort.

He and his team created the Indian landmark as a way of honouring its cultural legacy.

Lei said: “Taj Mahal is a symbol of love and one of the most famous scenic spots in India.”

“It is also recognised as a world cultural legacy, and listed in the New Seven Wonders of the World. We’ll always love it.”

Producing a Taj Mahal made from thousands of toothpicks is one of the most ambitious, yet most unique sculptures. 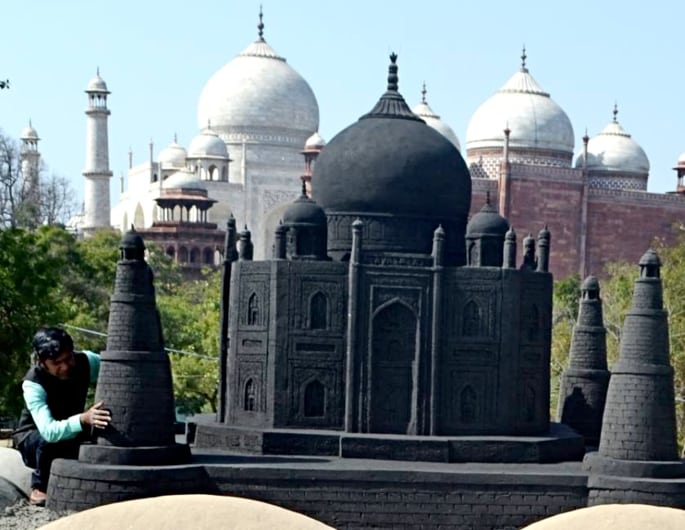 The Taj Mahal has been recreated in sand many times, lots of them by Internationally recognised sand sculptor Sudarsan Pattnaik.

He has represented India at 50 International Sand Sculpture championships around the world and has won 27 of them.

His most iconic creations are of the Taj Mahal. The most recognisable version is a black Taj Mahal sand sculpture with the actual one in the background in 2003.

A black Taj Mahal has been a longstanding myth that Shah Jahan intended to build one using black marble across the Yamuna river.

Sudarsan’s creation is one which was left unfulfilled by Shah Jahan.

The black sand version was made in celebration of the Taj Mahal’s 350th year since completion.

The sand version, which had a height of 15 feet, took almost a full day to build.

Sudarsan said: “Shah Jahan took 22 years for his Taj but this Black Taj with a height of 15 feet, has been created in 22 hours.”

Sudarsan’s other sand Taj creations include one which was 22 feet tall, his tallest version of the Indian landmark.

It has over 75 students learning this art form in his hometown of Puri. 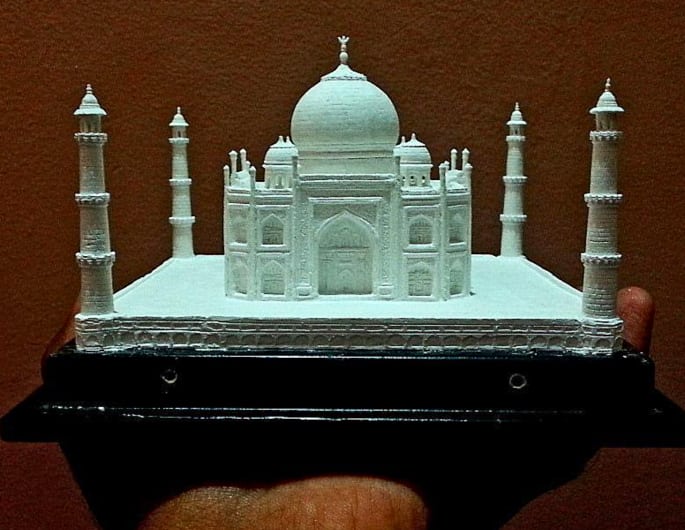 The iconic building in Agra is also a sculpture recreated in chalk.

It was created by none other than software engineer and renowned micro-sculpture artist Sachin Sanghe.

He makes micro-sculptures using materials such as chalk and pencil graphite. They range from deities to pop culture.

Sachin’s intricate sculptures have gained him huge recognition among India’s most famous celebrities.

Sachin Tendulkar and Amitabh Bachchan are big fans of his work and have been gifted some miniature sculptures.

His chalk creation of the Taj Mahal in 2015 is likely his most challenging piece of art to create.

Every detail is captured in the artwork which took Sachin over 100 hours to complete in a period of three months.

Sachin’s creation involved extensive planning as he had to scale down the measurements for his palm-sized piece.

“I had to make many measurements in order to scale it down so everything was proportionate.”

His chalk Taj Mahal is just one of the hundreds of “chalkruti” pieces, a term he coined as his art form. 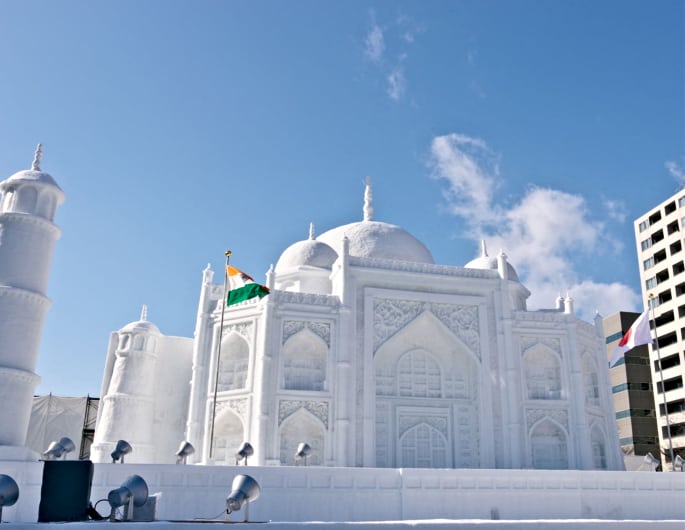 A more simple material to create a sculpture, but nevertheless, one which is difficult to master.

In Japan, snow is used as a sculpting material and many famous landmarks have been created, including Shah Jahan’s architectural piece.

The snow replica of the Taj Mahal is one of the largest sculptures made, with it being over 50 feet tall.

It was one of almost 250 snow sculptures on display at the annual Sapporo Snow Festival in Japan in 2012.

The huge sculpture was made using a combination of snow and ice which has been carved to highlight each detail.

It is the second time that the Taj Mahal featured at the Japan festival.

At the 2004 festival, the Indian world heritage site made its debut in snow form. It was so popular it made a return in 2012.

Each detail of the railings has been recreated using snow, making it more impressive that the sculpture was done on such a large scale.

The creation is one of the most eye-catching works of art with many people who have attended the festival to see it. 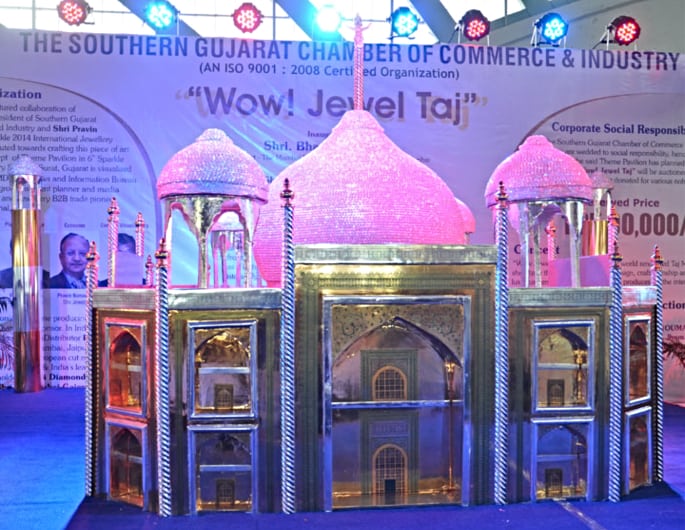 The most luxurious replica of the Taj Mahal needed 45 days and a team of 15 people to create this gold and silver-clad sculpture.

It was finished with 50,000 diamonds and cubic zirconia.

Called “Wow! Jewel Taj,” the nine-foot tall sculpture was presented by the organisers of the 2014 Sparkle International jewellery show in Surat.

It was to showcase the brilliance of Indian design and craftsmanship.

Over 18 kilograms of silver and 1.5 kilograms of gold adorn the impressive replica, mimicking the main mausoleum and four towers.

A Thailand-based firm donated 35,000 cubic zirconia to support the project.

This highlighted the original design which featured precious gems embedded in its walls.

Foreign invaders stole the stones from the Taj Mahal.

“Wow! Jewel Taj” intended to be auctioned to benefit a girl’s education program of the state government.

The precious metal replica of the Taj Mahal is definitely a stylish take on the historic building.

These artistic sculptures have taken a number of approaches to illustrate such a famous landmark.

Amateur and professional artists have put in a lot of time and effort to create a Taj Mahal using a variety of materials.

The materials used for each sculpture are not the typical ones used for sculpting.

However, these unorthodox materials prove that the accurate representations of the Taj Mahal is possible and can potentially receive international recognition.