sand art is gaining its recognition throughout the world

World-renowned Indian sand artist Sudarsan Pattnaik was photographed sitting next to his magnificent construction of a massive tiger, reclining the simple slogan ‘Save Us.’

The award-winning artist spread the important message to protect tigers on colourful sand on World Tiger Day on Puri beach in Odisha.

Pattnaik took to Twitter to inspire his followers to protect India’s national animal. He posted pictures of his artwork with the message:

‘Tigers are a symbol of India’s wildlife wealth. Let’s protect the national animal”

97 percent of wild tigers have been lost in over 100 years.

World Tiger Day, which is held annually on July 29th, spreads awareness to the reservation rights of tigers, but also a celebration to the wild and wonderful animals.

Pattnaik was awarded the Padma Shri civilian award by the Indian government in 2014 and was this year’s gold medalist at the ninth sand sculpture championship The Magical World Of Sand held in Moscow.

The innovative sculptor who has created several sculptures of tribute also made a creation to honour late President Abdul Kalam as well as to wish Amitabh Bachchan a happy 73rd birthday.

‘The beach was my canvas and my fingers, the brush. Water gave shape to the sculptures and the only colour needed was that of sand’ he stated about his artwork.

He also paid a tribute to Queen Elizabeth II on her 90th birthday with a fantastic sculpture. 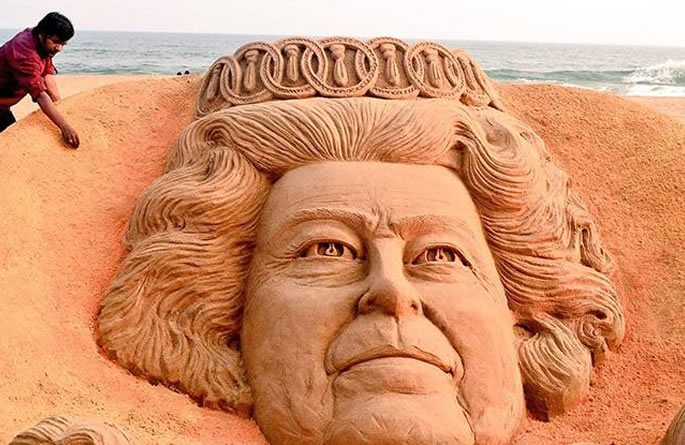 As well as tributes to famous people, Pattnaik’s creative pieces also represents many other global challenges.

“Now I am mixing this art with burning issues. So it is designed to catch up with the imagination of people and generate large scale awareness.”

“By doing this, sand art is gaining its recognition throughout the world and people are getting aware on important issues such as global warming and HIV/AIDS.”

To see more of Pattnaik’s creative masterpieces, make sure to follow his social media pages on @sudarsansand.

Gayatri, a Journalism and Media graduate is a foodie with an interest in books, music and films. She is a travel bug, enjoys learning about new cultures and lives by the motto “Be blissful, gentle and fearless.”
Indian Artists using GIFs to create Modern Art
Fatima Surrayya Bajia Japanese Play translations Launched