Indians who are Eating Sand Daily to Stay Fit

We are all told to eat healthily. Get our 5-a-day of fruit and vegetables. But what about eating sand? Here are two Indians who eat sand daily to keep fit and healthy!

"I have never seen a doctor because there has just been no need."

Eating sand may sound like a very odd and strange thing to do. But in India, two people are doing exactly this by consuming it daily and say it helps them keep fit and healthy.

These stories of two old-age Indians describe how eating sand has helped them with their ailments.

Sand is a loose granular material and its most familiar component is silicon dioxide which is in the form of quartz.

So, eating sand means you would be consuming quartz as part of your diet.

The two elderly Indians turned eating the sand into a daily ritual and say without the dose they find a day difficult. 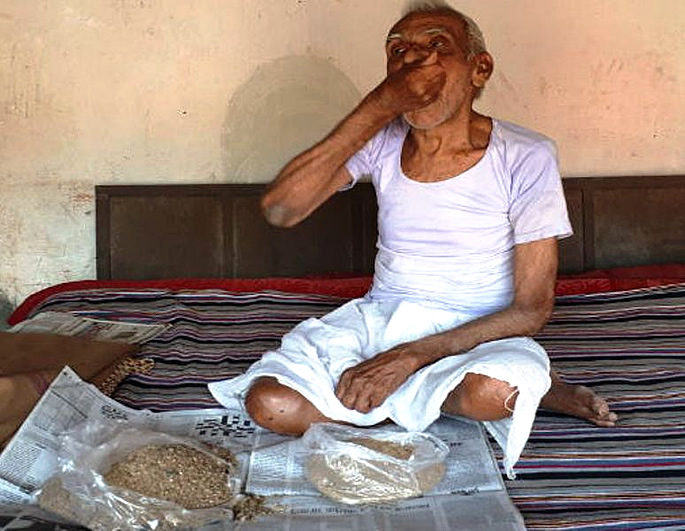 Ram Ikbal Choube, who is in his 80’s, is from Rajdaha village in the Pakur district of India, has been eating sand for the last 40 years.

This man has found that by eating sand on a daily basis contributes towards his good health.

Choube is a retired government civil servant, claims that he consumes about 500gm of sand every day which keeps him fit.

Without the daily dose, he says his stomach gets upset. So, eating the sand for him is compulsory each day.

He even keeps a bag of sand next to his bedside in order to make sure he does not miss a serving of it.

Choube says that when he was working, he began to suffer from a severe problem with his stomach which went on for many days.

He tried taking conventional medicines but to no avail. The stomach illness impacted his mental health too which resulted in depression.

Recalling the time when he discovered sand as a ‘treatment’ for his ailment, Choube says:

“One day, I rushed to the bank of a local river, picked up a handful of sand and then consumed them out of extreme frustration. And it worked wonders! I soon experienced relief and in the next few days, I found my problem of upset stomach gone over.

“After then, it has become my daily diet.

“The trouble began some 40 years back and since then I have been continuously eating sand. It doesn’t taste good but it has kept me fit all these years.”

Choube says he eats sand to reduce the problem of loose motions. He has found that eating it helps tremendously with this problem.

His newly found cure was not easily accepted by his family according to reports. They warned him and were concerned that eating the sand could cause other health problems.

However, since Choube was stubborn and not listening to their pleas they gradually gave up and stopped their objections.

Now use to the fact that his father eats sand daily, one of his sons, Harishankar Choube says:

“Initially, we would wonder at his habit but now it has become part of his daily diet. He feels restless without sand.”

When Choube first started to eat the sand, he would go down to the local riverbank, collect it and bring it back but now due to his age and lack of mobility, the family arrange for the sand to be brought to him.

“It’s rare that a man eating sand for a long time doesn’t experience any health complication but this case is really a miracle for me.” 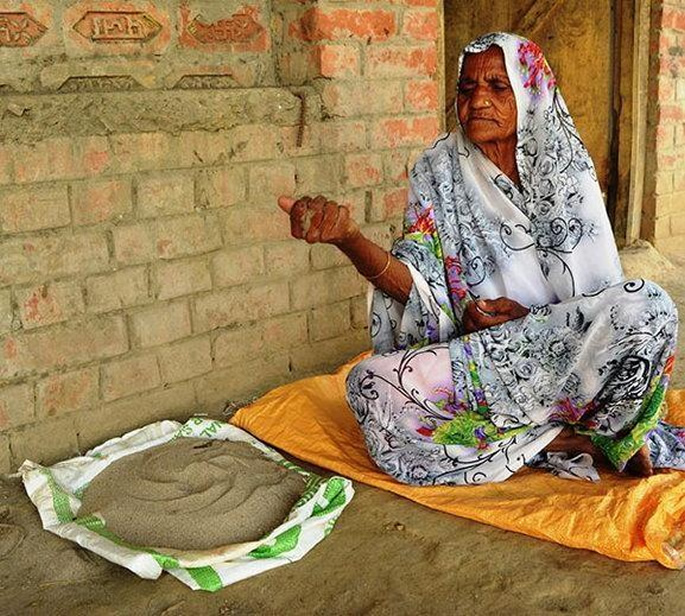 Kusma Vati, is 78 year-old woman from Varansai in India.

As part of her daily diet, she has been eating sand and gravel.

Kusma started to eat sand from the young age of 15 to address a bloating problem she had in her stomach.

Interestingly, a doctor had advised her to consume sand with milk in order to combat all sorts of diseases.

Kusma says of her habit:

“I have been eating sand and gravel for around 63 years now, I love eating them and I don’t think they have any harmful effects.”

“I haven’t suffered any problems in my stomach and mouth and my teeth are absolutely fine – if anything it’s made them tougher. I can bite into the hardest stone without a problem.”

When Kusma got married, she stopped eating the sand feeling embarrassed. But this resulted in her experiencing stomach aches and she had no medication that could help her ailment.

She was then taken to see a doctor who conducted an ultrasound on her. The results found nothing and that she was fit and fine.

Then, her in-laws found about her sand eating and allowed her to consume it every day.

Kusma eats about 1 Kg of sand every day.

Kusma feels fine after consuming this amount of sand daily and says:

“I have never seen a doctor because there has just been no need, for as long as I can remember I’ve felt perfectly fine.”

“I started eating sand at the age of 15 and I had a bad stomach ache but that didn’t last long and now it feels like all this is very normal to me.

“I feel as though the minerals in the sand give me the energy to work in the crop fields.”

However, not everyone is happy with her sand eating antics. Her grandchildren are now begging her to stop this strange habit, but she does not understand why she should. She says:

“My grandchildren insist I get medical help to get rid of this addiction but I see no need for it. I am healthy and fit all thanks to sand.”

Dr D.N. Pande, head of the anaesthesia department, BHU Varanasi, India does not recommend this habit and claims it is abnormal. Saying it is a “psychiatric disorder” and many of people become victims of using such odd habits to get rid of stomach issues.

Well, it looks like eating sand daily for Choube and Kusma seems to work for them. But it goes without saying, if you have any stomach issues, trying this for yourself is definitely not advised. Seeking professional medical attention is the best course of action.

Amit enjoys creative challenges and uses writing as a tool for revelation. He has major interest in news, current affairs, trends and cinema. He likes the quote: "Nothing in fine print is ever good news."
Pakistani model Diya Ali sizzles in Viral Bikini Shoot
The Changing Trend of Tattoos among South Asians