US Indian Cop indicted for Shooting a Mum during Welfare Check

A US Indian cop of Arlington Police Department, Texas has been indicted for shooting a mother-of-three during a welfare check.

A US Indian cop in Texas has been indicted in the fatal shooting of a mother in 2019 during a welfare check.

Ravi Singh, formerly of the Arlington Police Department, was indicted by a Tarrant County grand jury on criminally negligent homicide charges on September 16, 2020, in relation to the death of 30-year-old Margarita Brooks in August 2019.

The rookie cop accidentally shot Margarita in the chest when he fired his weapon at a dog that was lunging at him.

Singh had been responding to a call of a woman reportedly passed out in a grassy area near the intersection of Cantor Drive and North Collins Street on August 1.

Bodycam footage shows Singh approaching Margarita. However, he notices her unrestrained dog which begins to bark.

The dog suddenly begins to run at the officer.

As the dog charges towards him, Singh says: “Get back!”

He then fires three shots. Margarita is then heard screaming: “What the f***. Oh my god – the police shot me!”

She was taken to Medical City Arlington Hospital but later died. She had suffered a single gunshot to her chest.

Margarita’s cause of death was ruled as homicide and the case was handed over to the Tarrant County Criminal District Attorney’s Office for presentation to the grand jury.

The US Indian cop resigned three months after the incident.

Singh had joined the department in 2012 as a detention officer. He graduated from the police academy in February 2019 and completed field training on July 1, exactly a month before the shooting. 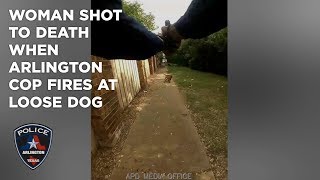 The victim’s family welcomed the charges against Singh but said the department should be held accountable.

In a statement, they said:

“We are pleased that the Tarrant County Grand Jury has returned an indictment for the officer who killed Maggie.”

“Officers responding to welfare checks should not be so quick to use their deadly weapons in situations that do not call for use of force.

“Our hope is not only that this officer is held responsible for Maggie’s death, but that the Arlington Police Department is also held accountable for its lack of training and procedures in responding to welfare checks.”

Her father Troy Brooks believes that the charges should have been more severe.

He said: “It’s a puppy. This is a grown man afraid of a puppy. Who is the paid professional in this encounter?

“Every child, every mailman, every runner, jogger, bicyclist has dealt with a dog running at them and no one ends up dead. Why do you go to deadly force immediately?

“We were hoping for a manslaughter indictment. We got what we got.”

Going forward, Mr Brooks is lobbying for accountability in the Arlington Police Department as well as across the country.

He wants money to be invested in other services to help the community directly rather than inflating police budgets.

Mr Brooks said the police work for the community, but his experience coupled with hundreds of other incidents across the country make him believe that isn’t true.

He stated: “It’s not a blue life. It’s a blue shirt. And we paid for it as taxpayers. You should work for us. We should define your job, not you.”

His attorney Kathy Lowthorp responded to his arrest:

“Well, when you deal with a dog that’s ready to attack then the person in any one of those careers would have to do what they have to do to protect themselves.

“And there was malice against the daughter — she was just in the wrong place. The dog should’ve been on a leash.”

Dhiren is a journalism graduate with a passion for gaming, watching films and sports. He also enjoys cooking from time to time. His motto is to “Live life one day at a time.”
Man died after being found lying in Road during Thunderstorms
Man blackmailed Woman with Sex Video & was sent to Sister