An A-Level student has revealed his thoughts after the University of Manchester made an error and sent him an “incorrect” offer.

"I feel betrayed and heartbroken.”

A student has been left devastated after an “incorrect” offer was sent to him by the University of Manchester.

Other prospective students received the same email confirming places at the university on August 24, 2020.

However, just hours later, the same students received a follow-up email apologising for an “incorrect email” and asking them to be patient in waiting for a final decision.

The students do not know when they will find out if they have been accepted onto courses at the university.

The university admitted their mistake and has apologised.

One student is Tatva Shah, from Burnage, received an email from the University of Manchester stating that he had been accepted onto a four-year Biochemistry course starting in September 2020.

He called family and friends, including those living in India, to tell them the good news.

But two hours later, Tatva received another email stating that the first may have been sent in error and his application is in fact still on hold awaiting a final decision as the course has some “capacity constraints”.

After two weeks of confusion around his A-Level results, Tatva has said it was a “devastating” blow.

He told Manchester Evening News: “Due to the government U-turn, it has been a stressful few weeks for me and my family.

“Last night I got an email from UoM giving me the news that I had waited for, I got into my course. I was absolutely overjoyed.

“I texted all my family and friends. Got many phone calls saying congratulations. It was a huge weight off my shoulders.

“But that didn’t last long as not two hours later I got another email saying that it had been an error and that the first email wasn’t for me. I feel betrayed and heartbroken.” 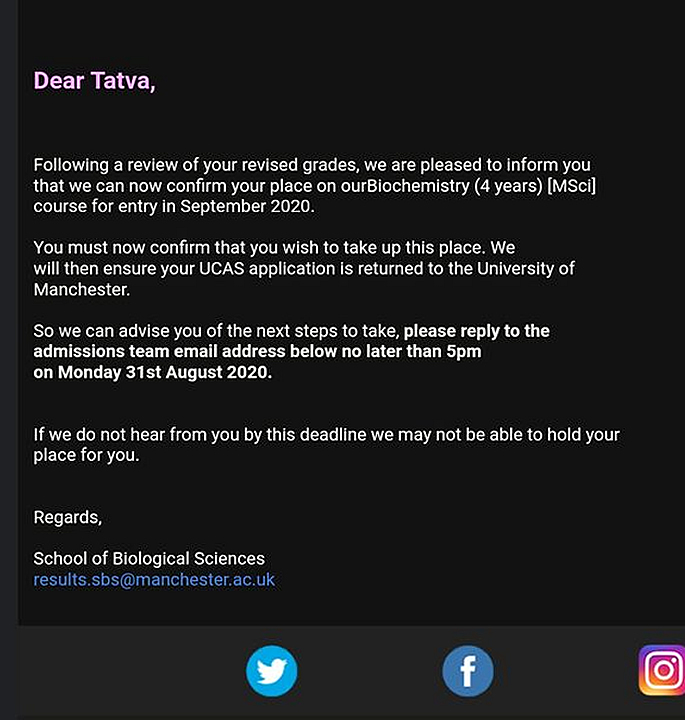 Tatva was initially told he would need three A’s in order to be accepted onto the course.

When the initial A-Level grades were released, an algorithm system resulted in him gaining BCD grades.

But they were later changed to ABB when the government decided to base results on teachers’ estimated grades.

However, the decision came too late for many students who had already made choices based on their initial grades.

Tatva said: “When I called the university this morning and waited an hour on the phone before they said I’ll find out in a couple of days.

“It has made me angry because things have been changing over and over again. I still don’t know if I’m going to uni in September.”

“I’ve got one month to prepare and I don’t know anything. I don’t even know if I need to start revising for the next exams because I’d like to take them again if I need to.

“And if I don’t get onto the course I won’t have anything to do because of Coronavirus.”

A University of Manchester spokesperson said: “We offer our sincere apologies to applicants for any further stress and confusion we have caused.

“Our staff have been working extremely hard over the weekend processing thousands of pieces of additional data since receiving last week’s updated exam grades.

“However, on Monday 24 August, a number of emails were sent out to students which contained incorrect offer information.

“The issue was identified quickly, and we are contacting those applicants immediately but in the meantime they can also phone our admissions hotline on +44 (0)161 804 0050 (Monday to Friday, 9am–5pm).”

Dhiren is a journalism graduate with a passion for gaming, watching films and sports. He also enjoys cooking from time to time. His motto is to “Live life one day at a time.”
Jealous Man jailed for Violent Attack on Ex-Wife & her Friend
Two jailed for Stealing £37k Jewellery from Pawnbroker