SRK partners with Netflix for New The Bard of Blood Series

SRK partners with Netflix on an upcoming series based on Bilal Siddiqi’s book, The Bard of Blood. Prepare for plenty of action and drama!

"Netflix has shown that Indian stories have a global audience."

Shahrukh Khan’s company Red Chillies Entertainment joins forces with Netflix for an exciting venture. They plan to create a new series, based on the popular book The Bard of Blood.

On 17th November 2017, SRK and Netflix CEO Reed Hastings announced the partnership at an event.

The original, multilingual series will consist of eight episodes. However, they revealed no news of when we can expect it to land on the streaming website.

Described as a political, espionage thriller, it will follow the events of The Bard of Blood. The book, written by 19-year-old Bilal Siddiqi, depicts a captivating tale of expelled spy Kabir Anand who flees India.

However, he is soon called back to the country for a new mission; one to save India and his long-lost love. Kabir embarks on a thrilling journey where he has to avenge the past and face a horde of deadly enemies. Fighting against the clock, will he be able to complete his extraordinary mission?

Viewers can also expect fantastic combat scenes, which involve “intricate, highly stylised action sequences never before seen on screen in India”. The series will be shot on location, filmed in English, Hindi, Urdu amongst other languages.

In a statement, Shahrukh revealed his excitement:

“We have always tried to create world class content and entertainment from India. Netflix has shown that Indian stories have a global audience and we would love to use this platform and its reach to tell more stories.” 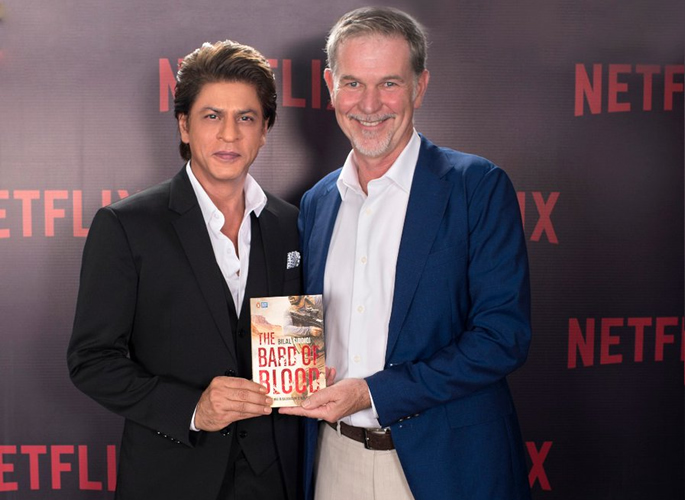 With this upcoming show, it will bring Bilal Siddiqi’s novel to new audiences across the world. Considering that this is his first book, it marks a huge accomplishment for the talented 19-year-old. Reed Hastings also added:

“We are thrilled to work with a brilliant, young writer like Bilal Siddiqi and take his gripping, inventive storytelling to Netflix members worldwide.”

Bilal took to Twitter revealing his happiness of the project. He posed for a picture with SRK, Reed and Gaurav Verma, CEO of Red Chillies Entertainment. Thanking all three figures, the author tweeted:

My first book – #TheBardOfBlood is going to be a @netflix series soon. This would not have been possible without Mr @_GauravVerma . Yes, that is the founder & CEO of Netflix – Mr @reedhastings . And then of course, there’s the man who has inspired millions like me – @iamsrk sir! pic.twitter.com/HEEXR43bGe

Back in March 2017, SRK and fellow actor Aamir Khan had met with Reed Hastings. While the occasion was downplayed as a “get together“, did the initial talk of a partnership take place? While we may never know, it could be a possibility.

With this new project, it shows the strengthening ties between Bollywood and Netflix. For example, Saif Ali Khan will soon appear in the service’s first Indian series, titled Sacred Games. The actor is currently filming scenes for the show.

Fans will have to wait a while for more news on the partnership. Until then, why not ‘Netflix and chill’ with these exciting Bollywood films!