“My catalogue is both Eastern and contemporary. Bits of urban and ethnic styles are mixed.”

Widely regarded as the Pop Princess of Pakistan, Kiani has always had a large fan base since the release of her first album Raaz in 1995. With favourites such as ‘Boohay barain’, ‘Sohnya’ and ‘Bol’, Kiani has wowed with every Pakistani hit.

She has won numerous awards for Best Female Singer over her successful career. In 2010, she won the Most Stylish Female Pop Singer at the Indus Style Awards. Most recently, she was nominated for Best Solo Artist at the 2013 Hum Awards.

With a modeling career also under her belt, it was inevitable for such a talented person to conquer the fashion industry, given the knowledge she has acquired over the years. 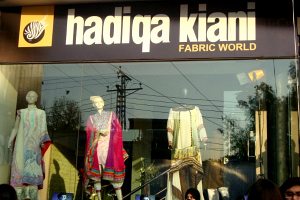 She has now followed in the footsteps of many famous individuals who decided to stray from their career and dabble in fashion.

Kiani now joins the likes of Shahid Afridi, Junaid Jamshed and Wasim Akram in the industry.

Fellow celebs turned up to support Kiani on her new venture. The faces of Ayaan, Shan, Jugan Kazmi, Shahzad Raza and Gohar Mumtaz could be seen amongst the partygoers.

Her brand new collection focuses on mainly lawn materials, which are unstitched premium embroidery for women and men. Multan is her third outlet in Pakistan after Lahore and Faisalabad. Speaking about the collection, Hadiqa says:

“The collection will be stitched and unstitched, but the company is mainly fabric so obviously unstitched material.” 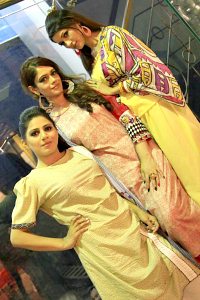 “There is a special signature corner where I have designed the outfits. In terms of patterns, it is a full journey where lots of people are involved. It was a dream of mine to come into the fabric industry.

“This journey of mine, I feel that when you do something really strongly, it manifests. You just need have strong faith in it. This in particular was still in the pending process. And from the beginning, fashion designing, colours and mixing and matching was a huge enjoyment,” she says.

What really comes out in her designs is her use of bold colours and basic prints. She uses light-weight fabrics and vivid designs.

Her collections include everything from palazzo pants, short and long shirts, digital prints, asymmetric designs and intricate embroidery.

While she relies on her Punjabi heritage for inspiration in the majority of her designs, she also looks to Turkish, Egyptian, Roman and Greek motifs to add a new dimension to her clothing. Speaking about her designs, Hadiqa says:

“I believe in the beauty of simplicity. That is why ‘Kamlee’ collection has been carefully designed in a way that reflects the innocence of beauty in simplicity added with colours.”

“My catalogue is both Eastern and contemporary. Bits of urban and ethnic styles are mixed,” she explains.

“I wanted thematic clothing, and mix and match. I didn’t want what was already out there. Just like you experiment with music, I have done so many, and still am today. I wanted to do the same with fashion.”

“There are so many things in the universe and elements in your surroundings and if you use them in your designing, they become automatically different and your vision materialises,” Hadiqa adds.

Her collection also offers a bespoke range of shalwar kameez suits for men and kurtas with delicate embroidery, in understated, traditional colours. 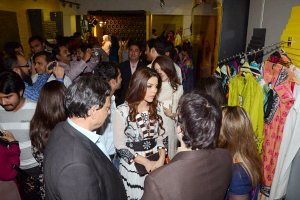 Her line shows embodied panels, chiffon and bright tie-dyes in unexpected places. She adds a fresh new take to the traditional lawn outfit, but looks to the public for inspiration.

On the official Hadiqa Kiani fabric world Facebook page Kiani and her colleagues post inspirational fashion quotes from famous faces along with sneak peaks into the collection. The singer turned designer stated on the page: “Style is a way to say who you are without having to speak.”

Her Facebook page also includes a few words of wisdom for all female fashionistas dressing to impress:

“Linen can be pressed with higher heat but should be pressed when damp. Silk requires lower temperature and it should be steam ironed, better if a press cloth is used. Wool requires steam press and a moderate temperature,” she writes on her Facebook page.

It is no doubt that singer turned designer Hadiqa Kiani, has taken the fashion industry by storm with her stylish premium collection.

With a huge buzz surrounding her designs, and positive feedback to her talents, both fans and the public are excited to see what else Kiani has in store for the future.

Huma is a Media student with a passion for writing anything fashion, beauty and lifestyle related. Being a bookworm, her motto in life is: "If you only read what everyone else is reading, you can only think what everyone else is thinking."
Zena Boutique ~ Indian Designer wear for Hire
Fashion Pakistan USA 2013