The Rizwan-Muazzam Qawwali Group from Pakistan will tour the UK in March 2017, in tribute to their late uncle and musical icon, Ustad Nusrat Fateh Ali Khan.

The special tribute tour organised by Asian Arts Agency marks the 20th death anniversary of the musical legend, who rose to international fame in the late 1970s and 1980s.

Nephews of the Ustad, Rizwan and Muazzam were trained by the maestro himself in the Qawwali tradition and have been continuing his legacy since 1990.

They have performed all over the world and have gained a devoted fan following in their own right. They are also popular guests at Coke Studio Pakistan, where they performed ‘Naina De Akhay’ in Season 3. As well as honouring their uncle’s popular compositions, the duo and their 10-piece band will also perform other Qawwals inspired by classic Sufi and devotional poetry.

The Group’s UK 2017 tour will take them to Luton, Birmingham, Bristol, Leeds and Gateshead. They will also perform at The Barbican in London on Monday 27th March.

“We are very excited about our UK tour in March and looking forward to meeting and performing in front of Qawwali loving audiences.

“With 2017 being the 20th death anniversary of our great Uncle Ustad Nusrat Fateh Ali Khan, we will be paying our humble respects to him, bringing a special show to UK Qawwali fans.

“We plan to perform songs from our Uncle’s own compositions alongside Qawwali favourites.

“We learned so much from him – he was a great teacher but above all a great and kind human being. He brought Qawwali music and its message of peace and love to a world audience and we continue spreading this message through our live shows.” 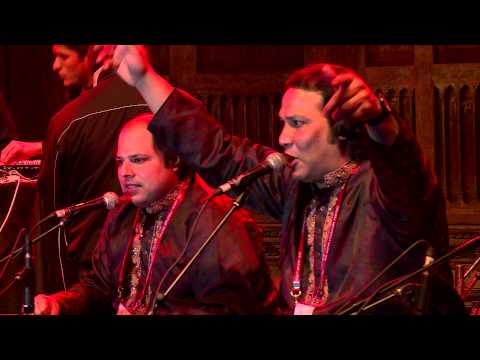 The 2017 tour by the musical group also coincides with the 70th anniversary of Indian Independence and the birth of Pakistan. Director of Asian Arts Agency, Jaswinder Singh adds:

“We are delighted to be bringing Rizwan and Muazzam to UK audiences in 2017, as part of our touring programme.

“Rizwan and Muazzam are arguably the finest Sufi musicians in the world and we are sure that audiences in the UK will have a great time enjoying their incredible live performances.

“The Agency is one of the leading touring producers of contemporary Asian music in the UK and this tour further strengthens our expanding touring work.”

Rizwan-Muazzam Qawwali Group tour dates for 2017 are as follows:

The Rizwan-Muazzam Qawwali Group are known for their mesmerising performances. And their effortless ability to take audiences on a journey through stunning melodies and poetic lyrics. Alongside their instrumental band, the duo will perform in Farsi (Persian), Urdu and Poetry.

For more details about the Rizwan-Muazzam Qawwali Group or to book tickets, please visit the Asian Arts Agency website here.

Aisha an English literature graduate, is a keen editorial writer. She adores reading, theatre, and anything arts related. She is a creative soul and is always reinventing herself. Her motto is: “Life is too short, so eat dessert first!”
Ae Dil Hai Mushkil album Streamed over 1 Billion Times
Mim Shaikh talks Radio and BBC Asian Network Live 2017