The theatrical stage production of Anita and Me is touring the UK in 2017. The musical is based on Meera Syal’s novel and adapted by Tanika Gupta.

“I’m delighted that Anita and Me is touring the UK"

The smash hit production of Anita and Me is all set to tour the UK in Spring 2017.

Based on the heartwarming Brit-Asian coming-of-age novel by Meera Syal, Anita and Me has been adapted for the stage by Tanika Gupta and directed by Roxana Silbert.

Joining the cast for the UK tour is none other than Coronation Street and Dinner Ladies star, Shobna Gulati who will be playing the character of ‘Daljit’.

Set in the 1970s, Anita and Me follows the childhood of Meena, a 12-year-old British Punjabi girl from the Black Country. Surrounded by predominantly white middle-class families, Meena struggles to identify with her traditional Punjabi family.

Eventually, she comes across Anita, a cool and rebellious white 14-year-old, that opens up a new world of opportunity for Meena.

But will Meena be able to handle all of Anita’s teenage drama, and the clash of two very different cultures? 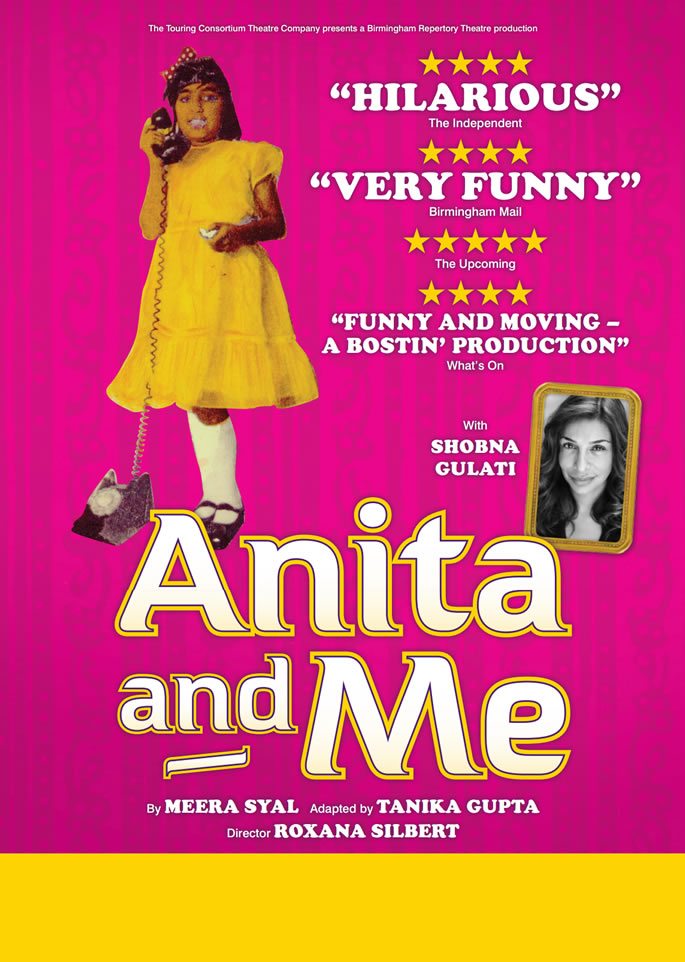 Meera Syal’s coming of age novel has very quickly transformed into a British Asian classic, especially after it was made into a film in 2002.

The stage adaptation originally premiered at the Birmingham Repertory Theatre in 2015. Starring the likes of Mandeep Dhillon, Ayesha Dharker and Ameet Chana, it received glowing reviews.

Now The REP has teamed up with the Touring Consortium Theatre Company to take the critically acclaimed stage adaptation to Wolverhampton, Cheltenham, Blackpool, Nottingham, Bradford and Edinburgh

Syal and Gupta’s masterpiece will see Shobna Gulati as Daljit, but further casting is yet to be announced.

The production will also invite eight local actors from each region to be a part of the play.

Speaking about the 2017 tour, Meera Syal says: “I’m delighted that Anita and Me is touring the UK.

“It is amazing to think of so many people engaging in this story – particularly young people, who like me as a child, may be wondering how they fit in!”

Lighting design is by Chahine Yavroyan, sound Design by Ben and Max Ringham, original choreography by Ann Yee, and the set and costume design is by Bob Bailey.

Anita and Me will open at Wolverhampton Grand Theatre on Tuesday 14th February 2017. For more details of the tour, please visit the Touring Consortium Theatre Company website here.

Aisha is an editor and a creative writer. Her passions include music, theatre, art and reading. Her motto is “Life is too short, so eat dessert first!”
Shilpa Shetty Trolled over Animal Farm book Blunder
10 Must Read Novels by British Asian Authors