Ustad Nusrat Fateh Ali Khan is one of the greatest Qawwali legends of all time. DESIblitz pays a special tribute to this maestro and his illustrious career.

"The language of music is worldwide, international. Rhythm and Sur is not dependent on any language"

Ustad Nusrat Fateh Ali Khan is perhaps one of the greatest Qawwali singers to have ever graced the Earth. The legacy he has created has been truly immeasurable.

Born in Lyallpur (now Faisalabad), Pakistan in 1948, Khan sahib had an influential musical career which involved different genres. Sadly, he died at the relatively young age of 48, but his music is still alive today.

Nusrat’s love for Qawwalis and Sufi music gave him the unique honour of being regarded as a Master Qawwal by anyone who had the pleasure of watching him perform.

His music is known to have a spiritual significance to it, many people believed that Khan Sahib fell into a state of trance while singing and despite his short-lived career, he became worthy of titles such as Shahenshah-e-Qawwali.

He was initially trained in the art of Qawwal by his father, Fateh Ali Khan, who was part of a long line of professional Qawwal singers.

A young Nusrat began learning to play the tabla before eventually moving on to Raag Vidya, Bolbandish, and Khayal – singing in the classical framework.

His father sadly passed away in 1964 and Nusrat was left to the guidance of Ustad Mubarak Ali Khan and Ustad Salamat Ali Khan who completed his training.

Khan sahib’s performances were phenomenal. It is no surprise that people who went to his concerts for the first time were mesmerised by the music. He stirred excitement in their hearts. Interestingly, he also always seemed to enjoy every single performance.

It was his impact on an international level that was truly spectacular. Oriental Star Agencies (OSA) owner, Mohammad Ayyub, was responsible for bringing Khan sahib to the UK from Pakistan, to expose his incredible talent.

Ayyub recalls first listening to a recording of ‘Haq Ali Ali’ in 1977, brought back from Pakistan by a friend. The song completely mesmerised all the listeners.

Ayyub was confident that Nusrat Fateh Ali Khan would be an immediate success among the South Asian’s in Britain yearning for their homeland. And indeed he was right. Subsequently, Ayyub introduced Khan sahib to remixers like Bally Sagoo who produced the hugely selling album Magic Touch.

Khan sahib felt that younger generations had no idea about Qawwali or Sufi music and therefore, by experimenting and mixing his voice with different Western genres, it would provide the platform to promote the music to younger audiences. This certainly worked with him appealing to the masses.

His live concerts and mehfils across the country were quickly sold out as news of Khan sahib spread. Khan sahib spanned a 25-year career seeing him produce over 120 albums for many record labels including OSA, Real World (owned by Peter Gabriel), Navras Records, EMI, Saregama and many more. 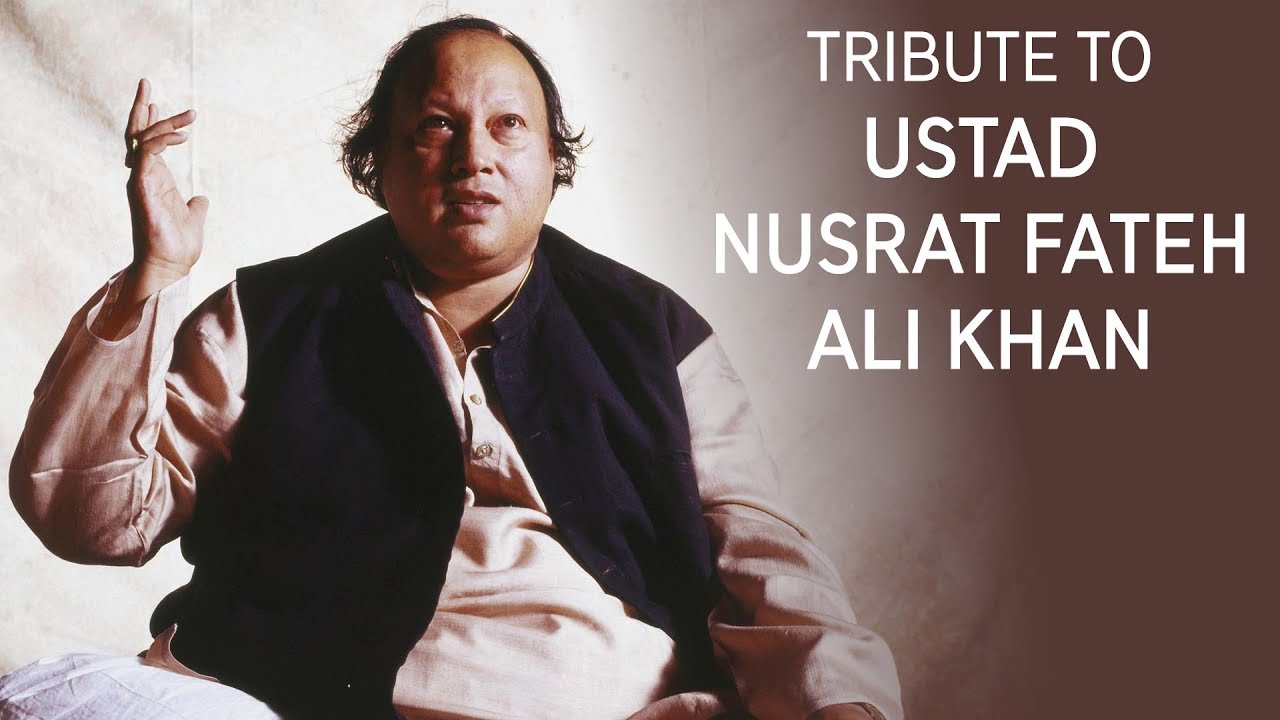 Even people who didn’t understand the language were still able to relate to his music and understand his emotions. It was this ability to form a connection with the audience that rewarded him with such fame.

Performing in front of a foreign crowd for any other artist can be a daunting task. Nusrat Fateh Ali Khan, however, was able to win them over effortlessly. Speaking about one of his earliest performances in front of a non-ethnic crowd, he expressed:

“In my mind I knew I had to perform to them. The language of music is worldwide, international. Rhythm and Sur is not dependent on any language.

“I thought if I could control these two, and play them well, no one would say they could not understand the words. There is so much strength and power in Leh and Ruh that people become inspired,” Khan sahib said.

Jeff Buckley, an American musician and a die-hard fan expressed: “Nusrat. He’s my Elvis, that’s my guy; I listen to him every day.” 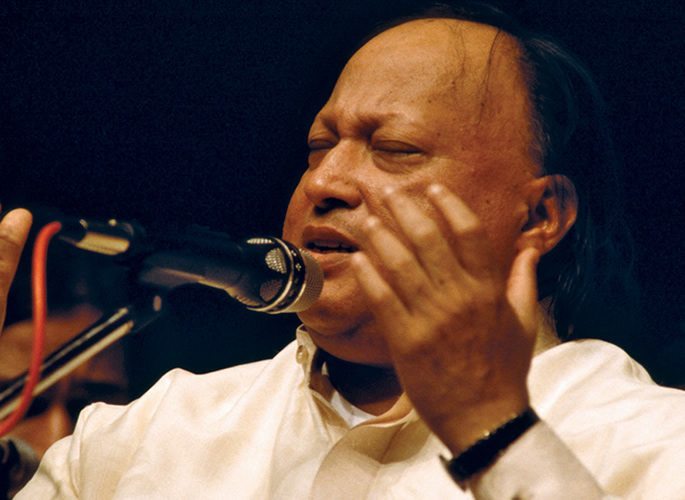 A well-known track by Nusrat Fateh Ali Khan is ‘Allah Hoo’ which is loved by his daughter, Nida. The song has a religious significance to it. Simply saying that it is beautifully written and sung does not do justice to it. It is regarded as one of his best works.

‘Yeh Jo Halka Halka Suroor Hai’ is also an excellent example of Khan Sahib’s amazing vocals. Jeff Buckley even sang the beginning of the song as a tribute to Khan sahib.

More popular songs by him include ‘Dam Mast Qalandar Mast Mast,’ ‘Mera Piya Ghar Aaya’ and ‘Shahbaz Qalandar’. The song, ‘The Face of Love’ is incredible, laced with a great message and is a collaboration with Eddie Vedder (lead singer of Pearl Jam).

All of his songs are unique and entertaining, people who haven’t heard his songs are recommended to do so. It was much later in his career that Nusrat started recording for Bollywood, including the popular wedding song ‘Dhadkan’ (Dhadkan, 2000).

In his personal life, he married his first cousin, Naheed (the daughter of Fateh Ali Khan’s brother, Salamat Ali Khan) and together they had one daughter, Nida.

His musical career, however, was short-lived after suffering from diabetes and blood pressure, he subsequently suffered kidney and liver failure in London in 1997 en route to the USA for a transplant. He died on 16th August 1997 from cardiac arrest in hospital. 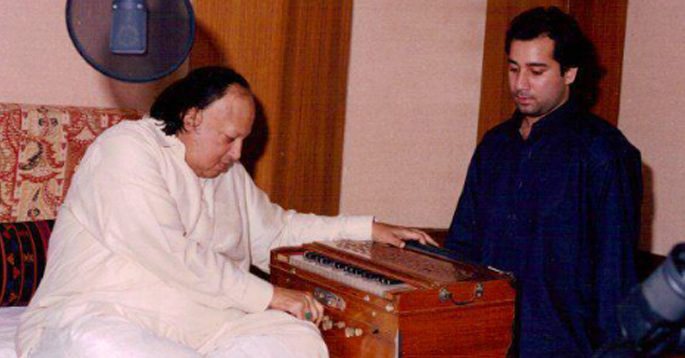 Khan sahib’s nephew, Rahat Fateh Ali Khan, has since taken up the Qawwali mantle, performing all of the Ustad’s famous hits, while still maintaining his own unique style. Paying tribute to Khan sahib, Rahat said:

“He was such a musician, such an artist who could change the world in 15 minutes through his verses. His music could manipulate time and he could predict what turn the music world is going to take in the next 10 years. To lose such an artist is no small loss.”

Khan sahib’s achievements in such a short career span have been nevertheless remarkable. He was given the Pride of Performance in 1987, which is one of the highest awards given by the Pakistan Government.

People who were inspired and influenced by him formed a band solely based on Khan sahib’s music; called ‘Brooklyn Qawwali Party’. His music was also played posthumously in popular American movies such as Blood Diamond (2006), Eat Pray Love (2010) and Dead Man Walking (1996).

Today, people listen to his music regularly and many modern musicians play his music and try to emulate his style. However, giving prestige to Khan sahib, to this day, no other musician has been able to match his level.

For people in Pakistan, India, and the rest of the world, he will always be considered an idol and an inspiration to all. His passion and talent got him to his position. His untimely death was unfortunate and a tragedy. May Ustad Nusrat Fateh Ali Khan’s music and passion live on through the hearts of his fans and followers always.

Hiba's born and raised in Pakistan. She's a bookworm with a passion for journalism and writing. Her hobbies include sketching, reading and cooking. She also loves most types of music and the arts. Her motto is "Think big and dream bigger."