Young, beautiful and talented Prabjyot Kaur is a rising star, and protégé of Ustad Tari Khan. In an exclusive Gupshup with DESIblitz, we look into the musician’s life so far.

"I was influenced by quite a lot of artists from India and Pakistan."

Prabjyot Kaur was born and raised in Birmingham, UK. Her family background consists of prominent musicians and musicologists. Prabjyot was born into a family of musical personalities.

With musical influences around her at a young age she was destined to be great. In an exclusive Gupshup with DESIblitz, Prabjyot explains:

“It’s in the family, my grandfather – he was into music, my father, Professor Amar Singh. I inherited it in the family. I started vocal training; I learned tabla and sitar as well.” 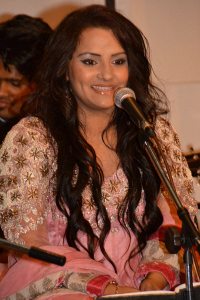 Prabjyot has been singing since childhood. Music brings her peace, happiness and contentment. This can be heard through her deeply emotional and sensitive approach. She has a powerful voice that fills venues and leaves an imprint on the listener’s hearts.

With a sound classical base and a rich quality of voice, Prabjyot is a gifted singer and musician. Her techniques are flawless, and she has incredible versatility. Her genres include kafi, ghazal, geet, bhajan, shabd and Kirtan.

Despite being a law graduate, Prabjyot finally decided to take music professionally in 2010. This is no surprise as she was lucky enough to be a student of two precious Ustads and master musicians.

The first of course was her father, Professor Amar Singh. A prominent professor in India and the UK, he has been teaching music for several years and is a celebrated singer and teacher at the Amar Singh Academy of Arts.

Amar Singh taught Prabjyot the intricacies of Sur and Raga, and gave her the first taste into the world of Indian classical music.

Sur and Raga are musical structures with five or more notes that establish and identity and more importantly a mood. Raga can be very powerful and heart-warming to listen to and is one of the best techniques used in traditional Indian music.

Her second teacher is renowned table player and extraordinaire, Ustad Tari Khan. Pakistani born and US based Ustad Tari Khan has travelled the world and displayed his amazing tabla skills. 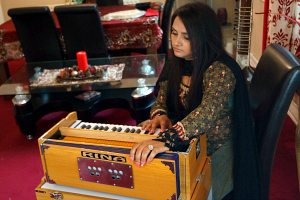 He has singlehandedly maintained the popularity of this percussion instrument used in Hindustani classical music and popular devotional music of South Asia.

Although his major is tabla, Ustad Tari Khan helped Prabjyot grasp the ropes of Laya and Tala.

Prabjyot admits that she looks to many South Asian musicians and artists for her musical inspirations:

Prabjyot has also had the opportunity to travel a lot to India and to meet her idols, speaking of them she says:

“Everybody has their own style and everything. But one thing that I did learn from them was that they’re humble. They respect music, they worship music.”

Her debut album, Sajdaa officially launched at the Nehru centre in London on July 22, 2013. With big names present, Prabjyot made sure the album was perfect, working two long hard years in the recording studio. 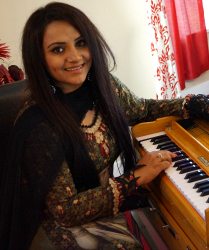 Most of the artists also gave a performance at the big launch to show their support, including the legendary Ustad Tari Khan who performed much loved ghazals from Ustad Mehdi Hassan and Jagjit Singh.

The album consist of seven songs, all delicately thought out and unique in their own ways.

From the title itself, listeners can gather that spirituality is one of the underlying themes of the album. One of Prabjyot’s personal favourites is the Sufi Kafi by Baba Bulleh Shah, ’Aao Ni Saiyyo’. Ustad Tari Khan plays the tabla in this track.

The rest of the album screams versatility, from Arabic beats to Bollywood romance. It very much shows Prabjyot’s ability to sing to all genres of music, and can explain how easily she has broken into the Bollywood and the Punjabi film industry. 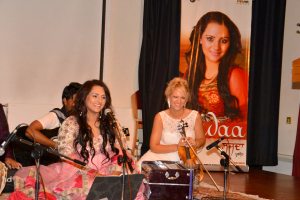 A seasoned performer who has performed at prestigious venues all over the world, her recent song ‘Sajna’ released from album Sajdaa was composed, written and directed by Ustad Tari Khan Sahib.

As a result, Prabjyot admits that it is a very special track for her as it was the first song she completed for the debut album, given to her by Tari Sahib himself.

A promising young singer and musician who gained musical knowledge from great Ustad’s, Prabjyot is set to make her mark on the Bollywood and she really is a name to watch.

Yasmeen is an aspiring fashion designer. Aside from writing and fashion she enjoys travel, culture, reading and drawing. Her motto is: "Everything has beauty."
A Tribute to Ustad Nusrat Fateh Ali Khan
Zayn Malik ~ from Music to Marriage?