RAGE 2: What to Expect from the Unexpected Sequel

The sequel to the first-person shooter RAGE releases in May 2019. In what was an unexpected annoucement, here is what to expect from RAGE 2.

Mutated creatures also add to the chaos that ensues

RAGE 2 is set for release on May 14, 2019, but it was an announcement that gaming enthusiasts were not expecting.

Avalanche Studios announced the game at E3 2018 and it brings back vehicular combat through a first-person perspective.

It was a sequel that was hinted numerous times and the success of the previous game had warranted enough to create a new game.

Like it’s predecessor, the game is set in a post-apocalyptic world and you must survive against enemies who are also trying to thrive in such a harsh environment.

The game has a lot of open-world exploration and you can drive any vehicle in the game’s world. Both RAGE and RAGE 2 have similarities to the Mad Max films.

What makes this new game different is that there is a more colourful aesthetic. Bright pink and yellow dominate the screen among a backdrop of the varied landscapes. 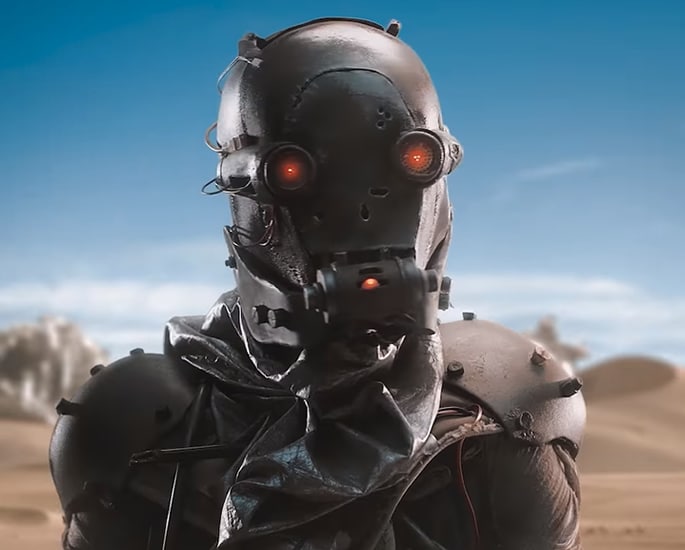 In the previous game, players took control of Nicholas Raine, a soldier among the wasteland.

While he was a good character to play, he does not return for the sequel. Instead, players take control of a ranger called Walker, who is free to explore the game’s post-apocalyptic world.

The inclusion of Walker already makes the game more interactive and unique to each gamer as the protagonist is completely customisable.

You can control some of Walker’s attributes, such as their gender, skills and attire. 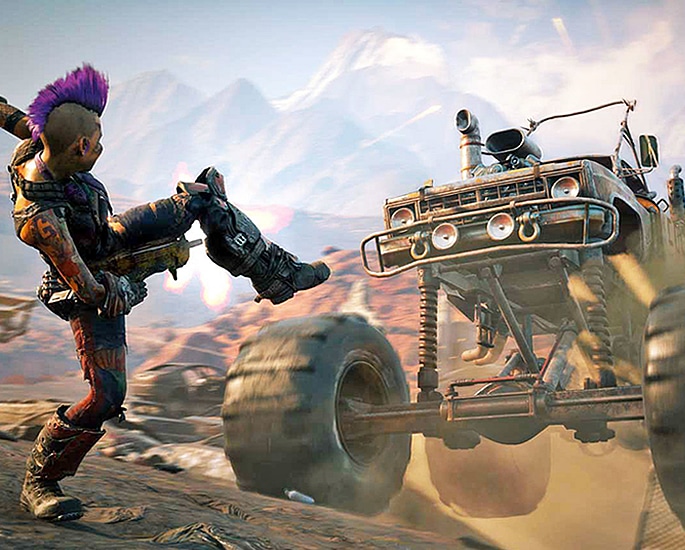 RAGE 2 takes place on a world that has been inhabited by dangerous mutated creatures after it was hit by an asteroid.

Most of mankind has been killed, only a desolate wasteland remains. However, this environment has started to flourish again.

Gone is the desert-like setting of RAGE and distinct territories are in. The world stretches to snowy mountaintops and dense swamps.

This is down to the game being set 50 years after the original game. Id Software has referred to RAGE 2’s world as post-post-apocalyptic.

Walker is the last Ranger in the year 2185, battling the tyrannical Authority who return in the sequel.

They are on the hunt for nanotechnology in order to solidify their dictatorship. Walker, a Ranger, makes an ideal target.

Mutated creatures also add to the chaos that ensues as they can be hostile towards you.

Although there is half a century between the two games, you will encounter some familiar faces if you played the previous game.

Despite it being set in the aftermath of an apocalypse, RAGE 2 is more high-tech, with sci-fi technology informing the world itself.

It also impacts your journey and the actions you make through slick, brutal combat. 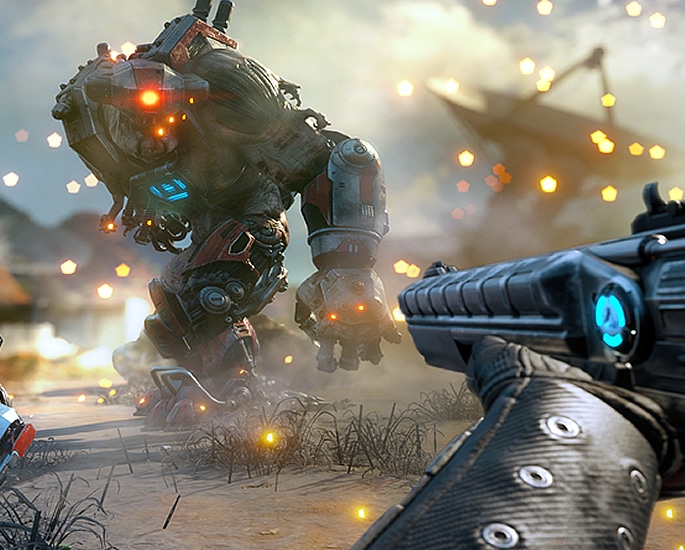 The world of RAGE is an unprecedented showcase of gaming chaos all within the bright neon colours.

It combines Id Software’s best-in-class first-person shooter mechanics with Avalanche Studio’s mastery of open-world insanity. The result is an incredible blend of action and visual appeal.

The gameplay of RAGE 2 is fast-paced and brutal. It even has similarities to Doom. It is fast and has an intimate, close-range focus.

Over the top gore only adds to the fun. Seriously, everyone explodes.

Air-dashes and double-jumps can be chained together to create crazy levels of power and versatility in the path of destruction.

One feature is the Overdrive gauge. Charge this up by chaining together combo kills quickly and you will trigger a temporary super-state.

This makes you more deadly, faster and more difficult to hurt for a limited time.

When Overdrive is triggered, gameplay becomes faster and the carnage elevates to a new level.

The fast gameplay that was so great in the previous game seems to have been enhanced for RAGE 2. 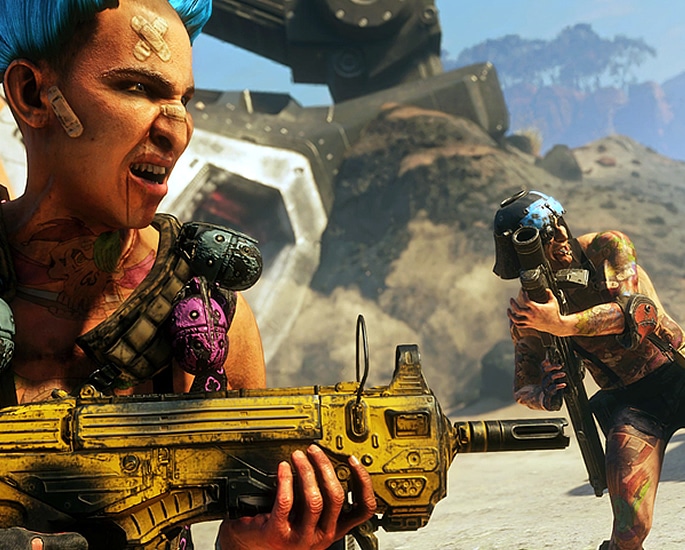 The upcoming release is exciting due to the plethora of weapons you will be able to get your hands on.

Walker is able to use various firearms and tools to fight against enemies. The popular wingstick also returns to the game.

This means that you can enjoy throwing the three-bladed propeller at unsuspecting enemies. It was popular in RAGE because it was very powerful.

The wingstick is able to kill most basic enemies in one hit, with only a few more needed for heavily armoured targets.

The shotgun is absolutely awesome especially when you combine it with your hero’s overdrive power. It will just cause mayhem against enemies.

And it only takes one squeeze of the trigger. The shotgun is effective in getting rid of any problems quickly.

They act as special powers and boost abilities. Nanotrites can also be used to increase combat efficiency.

RAGE 2 also features vehicular combat, meaning you can ram enemies as well as getting from A to B.

Players are able to drive any vehicle including trucks, buggies and gyrocopters. 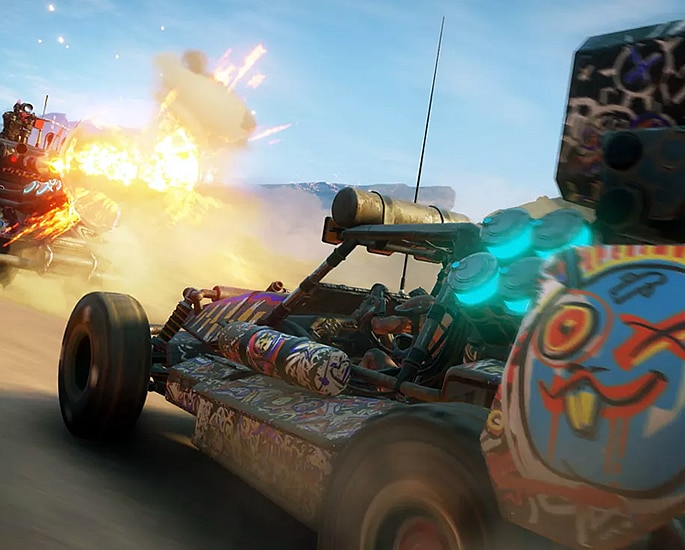 There are a number of other details to look out for when the game drops in May.

Equipment like grenades and the exploding remote-control cars may be returning to RAGE 2, though there has been no official confirmation.

There are special challenge races in certain areas when you visit. This can help you buy new parts and is a lot of fun when racing among bright pink and yellow smoke.

The story will be linear which you have to follow to progress through the game but will allow you to explore when not doing missions.

There will be a number of side quests to take on when you do not feel like taking on the main quest. There are also loads of landmarks to explore.

One example featured an outpost that was held up by mutants and the objective was to destroy the fuel tanks.

Some events are more intriguing than others but these subtle activities may prove to be the best features once the game is out.

Studio Director at Id Software Tim Willits explained that there are lots to do in RAGE 2, meaning you won’t lose interest.

Improvements on the Previous Game 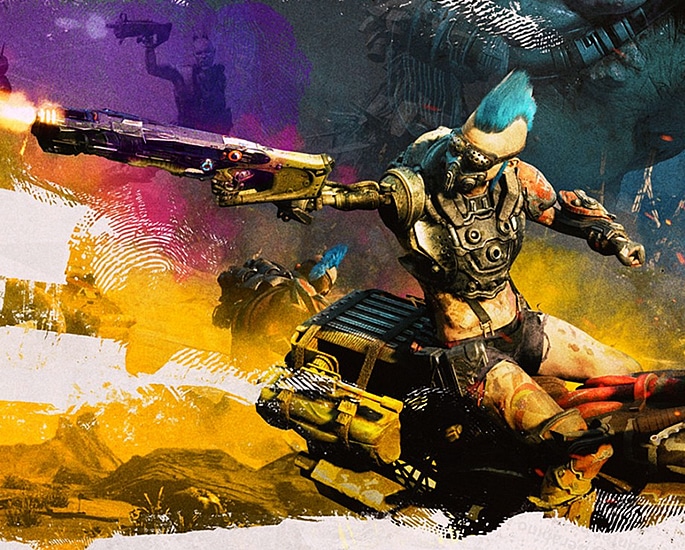 There were a lot of great things about RAGE but the big improvement in RAGE 2 is the amount that has been done to make it as immersive as possible.

It allows the world to be as open as possible, giving players free rein of what they want to do.

Combat and driving come together for a much more chaotic but integrated gaming experience. It creates a truly topsy-turvy apocalyptic world.

RAGE 2 also moves away from the drab colours typically seen in apocalypse-set films and set. Instead, the world is filled with bright colours.

It gives the game its own personality and life has returned to the wasteland.

Colour is present in the environment as well as in the vehicles and enemies. It gives an over-the-top lift to the game but it also highlights how chaotic the world has become since an asteroid struck the world.

For a game that nobody expected anytime soon, it looks like RAGE 2 has a more colourful personality than it’s predecessor and there are more ways to kill enemies.

Compared to the dry setting of RAGE, the sequel offers much more. It is what makes the game one of 2019’s most anticipated releases.

Mohsin is a writer, editor, thinker and fan of incomplete sentences. He is also crazy about playing video games and unveiling changes in technology.
India’s T-Series vs PewDiePie for #1 YouTube Channel
Priyanka Chopra is launching her own YouTube Show