Alchemy is the annual festival of music, dance, literature, design and debate about South Asia held in the UK. Held at the Southbank Centre and Royal Festival Hall in London, part of the event is dedicated to fashion and Pakistani Fashion definitely scored high with some stunning designs and looks.

"My aim: closing the gap between the East and West."

DESIblitz were personally invited to attend the Fashion segment of the Alchemy Festival on Friday 12th April. It was an evening that showcased the talent coming out of Pakistan, Sri Lanka and Bangladesh.

Arguably it was Pakistan’s fashion that stole the entire show. Taking pictures with their cameras, smart phones and iPads, audiences gasped at the collection. National and international media and press also captured the spell-binding event.

The designers from Pakistan were presented by RIWAYAT (one of the main partners for the Alchemy Festival); namely Adnan Ansari and Chris East, the founders of Pakistan Fashion Week. Traditions or ‘riwayat’ play a key role in Pakistani culture. Which is why Riwayat was the name chosen by Adnan Ansari for the platform that brought Pakistan’s best talents to the European market. 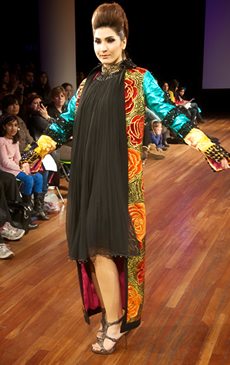 Adnan has been a key personality in Pakistan’s fashion and media industry since the last two decades. He has brought  a series of events over to the West to raise the profile of Pakistani fashion, music and literature. The first of these events was Pakistan Fashion Week (PFW) in London.

Now in its fourth show, PFW has in a short time been met with universal acclaim. Establishing a trusted and high quality brand name, it has become a historic and major calendar fashion event in the UK and globally. Hence the main reason that the Alchemy festival approached the founders of Riwayat to exhibit the top designers from Pakistan.

Adnan said: “It was a great honour to be invited and to hold the main event of the fashion segment. We were asked to open and close the fashion show. Both me and my business partner Chris East were overwhelmed with this.”

“We were both told that due to the success of Pakistan Fashion Week and the international coverage gained in such a short space of time that caught the eye of The Alchemy Festival. Most importantly it has been a dream to do an event at the Royal Festival Hall.”

Sonya Battla opened the fashion segment. She established her brand in 1996. Her mark is of high end, luxury fashion. Using only the highest quality fabric, each collection claims a uniqueness of style created by an expression of colour, innovation of pattern and a refined palette of embroideries, to set new trends keeping them exclusive.

The colours were bright and bold, and the models looked like colourful goddesses when they graced the catwalk. The opening took the audiences breath away. From their reactions, this collection definitely seemed to exceed guest’s expectations. 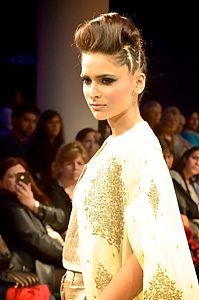 Zainab Chottani is one of the most famous designers of the Pakistan Fashion industry. She has carved a solid place for herself in the country’s fashion scene due to her breath-taking clothing range. From intricately embellished bridals to refreshingly cool pret wear.

Mohsin Ali’s collection was inspired from Pakistan’s rich culture and colours that he transforms into urban chic looks. This reflects in local hand embroideries and indigenous patterns. He beautifully depicts them through his collection.

Sophia Mehta’s formal wear is built around the rich fabrics of the East, known as ‘Banaras’. Using rich fabrics, they are hand worked embellishments.

A palette of exciting colour combinations takes one on a journey to the ancient and medieval ages. Special attention is awarded to putting the dresses together, from every stitch sewn, to developing the style of the bold and modern woman.

From Akif Mahmood’s collection it was evident that he is a perfectionist when it comes to mixing and transforming traditions into colours. Taking inspirations from core traditions of Pakistan and transforming them into art with the power of his fantastical imagination that runs deep into the shades and colours of feminism.

The grand closing was by none other Rizwan Ahmed. It’s time for serious pixie play with Rizwan Ahmed’s collection ‘A Midsummer’s Night Dream’. His collection came to life blazed in silver embellishments.

When asked about his collection, Rizwan said: “I want every woman to feel that they are in a mystical tale so that the pixies and fairies within them come out and play and embrace the charms femininity offers.” 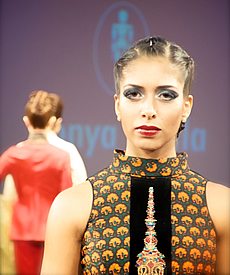 Overall, the response from these designers was overwhelming with the gasps and the constant clicking and flashing of cameras. Riwayat achieved a great platform through the Alchemy Festival.

Adnan stated: “I feel like jumping for joy with such a great response. It’s nice to see fashion from a different part of the world being appreciated here in UK.”

When asked about Pakistan Fashion Week 4, Adnan stated: “Since 2011, it’s been grabbing the attention not just nationally but also internationally. There are big things happening with some of the major fashion weeks around the world which is in the pipeline. Pakistan Fashion Week 4 will be bigger and better. My aim: closing the gap between the East and West.”

Pakistan has truly pulled out all the stops with its new range of designs from its many talented designers. We can only wait in bated anticipation to see what more they conjure up in their magic box of sewing tricks.

Photography by Pete Fallan for DESIblitz.com