‘My Name is Khan’ in the UK

On the UK promotional tour for ‘My Name is Khan’ Shahrukh Khan, Kajol Devgan and Karan Johar visited London with SRK making a unique appearance on the BBC’s Jonathan Ross show.

no horse riding and no kissing!

Shahrukh Khan visited the UK on a major promotion for his film ‘My Name is Khan,’ joined by Bollywood co-actress Kajol Devgan and the film’s director Karan Johar.

The film supported by Hollywood’s Fox Searchlight distribution deal is getting publicity at a very high level with unprecedented campaigns on television and radio.

Prior to the UK visit, SRK, Kajol and Karan Johar were in the USA promoting the film. They made history, by being the first ever Bollywood stars to open the US Stock Market. They rang the opening bell at the NASDAQ exchange in New York on February 1st 2010. All part of the campaign to publicise ‘My Name is Khan.’ 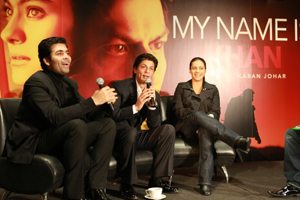 Shahrukh also visited many cities in India making live appearances in places like Indore and Ahmedabad. Something that he has not done at this scale before.

The ‘My Name is Khan’ trio arrived in London on Wednesday 3rd February 2010 and appeared at a security concious press conference for the film at The Courthouse Hotel, Great Malborough Street, London.

They answered the many questions related to the film and individual questions posed to each star. Among them was the major question related to SRK’s comments about no Pakistani players in the IPL which is causing major unrest by the right-wing Shiv Sena party in India. 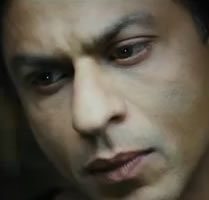 The Shive Sena party are protesting against ‘My Name is Khan’ and want it banned in theatres in India due to his comments. They say if SRK fails to apologise for his statement they want his film to be banned.

SRK is still sticking to his belief that Pakistani players should have been selected in the 2010 IPL, though some do wonder why he did to bid for any for the Kolkata Knight Riders.

Shahrukh is dismayed and saddened by the reaction of the Shiv Sena party. He said that he does not want to cause any grief to anyone or group due his opinions and that he would be the first to ban the film if it was to cause grief or unhappiness to any party.

On his Twitter account he said, “Sad my statements are seen as a stand against a group instead of a stand for myself and my individuality.”

Here is the trailer to this incredible movie:

My Name is Khan is due to release on 12th February 2010. SRK hopes the movie will be welcomed by audiences everywhere as it carries special messages.

When asked about the film, SRK said,

“How we’ve tried to portray the whole film is about ‘Hope Happiness and Humanity.’ Those are the three things we always try to pay attention to.”

The story examines the life of an honourable Muslim man called Rizvan from India, suffering Asperger’s Syndrome, living in San Francisco. He falls unconditionally for the beautiful Mandira, a Hindu single mother played by Kajol, and embarks on a remarkable journey across the United States, inspiring people while inviting debate and creating an accidental revolution.

As part of the publicity in the UK, posters of ‘My Name is Khan’ have appeared on the back of public transport buses.

The BBC Asian Network presented a ‘Shahrukh Day’ on 5th February in support of the film with recorded interviews aired by Adil Ray on the Breakfast Show, Gagan Grewal in the evening and and Bobby Friction. Raj and Pablo, the Love Bollywood duo, recorded ‘An Audience with Shahrukh Khan’ for their show featuring a Q&A session SRK, Kajol and Karan in front of an studio audience of 150 listeners.

A key talking point for Shahrukh Khan’s UK promotion was his appearance on the popular mainstream television chat show with Jonathan Ross on BBC 1 on 5th February. Shahrukh appeared on the show in a composed manner and entertained Ross’s questions with a deeper insight into Bollywood and witty banter.

Here are some clips from the show:

During the interview with Ross, when asked about kissing in movies SRK said, “Personally I’m awkward kissing on screen so I don’t do it so I have in my contract, no horse riding and no kissing!” Clips of ‘Main Hoon Na’ and ‘My Name is Khan’ were shown on the show with a discussion around SRK’s career.

It was inspiring to see a Bollywood star such as Shahrukh Khan present himself in a very articulated yet humble manner on the Jonathan Ross show, leaving the mark of Bollywood in very high regard on such a mainstream television show.